Army of medical students poised to take on corona: »Things can get serious« 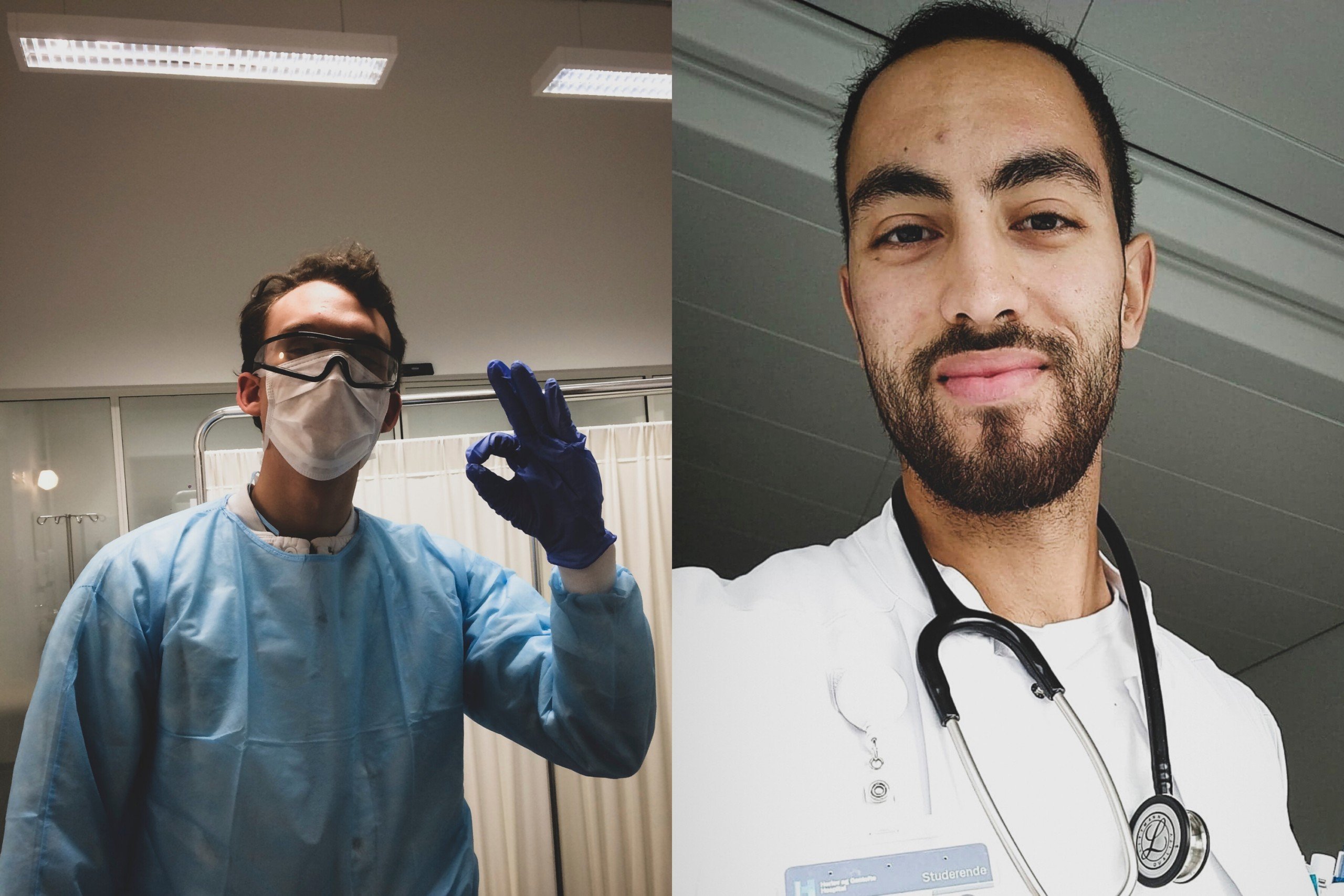 Johan Verner From-Pedersen on one of his shifts during the corona outbreak. The picture of Ibrahim El Haddouchi was taken before the virus came to Denmark.
image: Privatfoto

Medical students from the University of Copenhagen are among those recruited to the country's hospitals during the biggest health crisis in recent times. Three of them have spoken to us about their encounter with the coronavirus.

Ibrahim El Haddouchi didn’t even manage to put on his hospital scrubs before the red lights flashed.

On his first night shift at the corona response unit, he and a fellow student had only managed to park the car and enter Slagelse Hospital before a colleague they were to replace met them and exclaimed, »I am so glad you came!«

A ‘red call’ had just been signalled: A patient with severe symptoms of coronavirus had just arrived by ambulance. And as a nurse substitute, 23-year-old medical student Ibrahim El Haddouchi was among the staff ready to receive him. Place him in a ward, take blood tests and measurements before a doctor has to decide whether it is covid-19.

That’s how the whole night shift, and the following night shift, went. In the waiting room, several patients showed up with symptoms of coronavirus. Some had respiratory problems, some had milder symptoms, but they all looked worried.

»We are in a very unusual situation. It’s stressful. You are constantly challenged and you have to keep a cool head,« says Ibrahim El Haddouchi, who is studying on his eighth semester.

»You have usually been able to take a break now and then, and have a chat with a colleague. There has not been any of this, during the last night shifts. Things go quickly from the start to the end of it.«

Ibrahim El Haddouchi is not the only medical student that is ready to work during the corona crisis.

We are in a very unusual situation. It’s stressful. You are constantly challenged and you have to keep a cool head,

Claas-Frederik Johannsen is chairman of the FADL (Association of Danish Medical Students). He says that more than one third of the country’s medical students – currently 9,000 people – take the temporary nursing course during the course of their studies and can therefore potentially work in hospitals. There are an additional 500 students who are trained with the use of ventilators, which means that they can take care of patients with breathing difficulties, like corona patients.

Several ventilators are currently on their way to Copenhagen, Claas-Frederik Johannsen says. 240 medical students have signed up for a crash course, organized by the national hospital Rigshospitalet and FADL’s intern agency, and all will be trained before the Easter break so that they can help out in the hospital’s newly opened intensive care unit.

On Tuesday 31 March the University of Copenhagen tweeted that a total of 2,500 students from the university’s medicine programme are ready to be a part of Copenhagen’s corona response. At the same time, a unanimous Danish parliament passed legislation so students who are involved in the crisis response can apply for an increase in the threshold limiting their SU grant, so they now can earn more without having to repay.

Eye of the storm

Many of the students are quite young.

It is not long ago that Johan Verner From-Pedersen was still in secondary school. He is 20 years old, is taking his second semester of the medical programme, and is now working in Danish hospitals during the biggest health crisis in recent times.

Like Ibrahim El Haddouchi, he takes shifts as a nurse. He does the basic care of the seriously ill patients like taking their measurements, comforting them, and keeping an eye on their situation.

You don’t, whatever you do, want to be the one that causes the virus to spread to patients who don’t turn out to have had corona.

During his most recent shift at Bispebjerg Hospital, he came into contact with possible corona patients for the first time, as he helped carry out a series of preliminary tests before a doctor had to assess whether they should be tested.

On the one hand, he had tasks assigned to him that he knows already. On the other, it was clear that nothing is as it usually is.

»You walk around with this suit on, and you have to change gloves all the time and make sure that everything is disinfected. You don’t, whatever you do, want to be the one that causes the virus to spread to patients who turn out not to have had corona. We are well trained in paying attention to hospital hygiene, even under normal circumstances. But here you need to pay extra attention. In this way things are a bit harder than usual,« he says.

He won’t call it frightening, however.

Quite the contrary. He says he is happy to be able to do his bit for society so early in his education programme. And when he talks to fellow students who are also part of the emergency response in hospitals, on corona hotlines, or working somewhere else, they all say the same thing.

READ ALSO: In the dorm’s shared kitchen, they disagree on how to handle corona

»This can be a tough job, and we’re in a very serious situation. But it’s a part of the job, and you rise to the challenge. As medical students, we already take care of many tasks in hospitals, so it is not like we are going in directly from the textbooks,« he says.

Frederikke Prætorius already has one year of experience working with ventilators.

She is part of an ad hoc, so-called ‘flight’ team, where she is not based in one hospital, but is assigned to a ward or one particular patient for a shorter period of time, depending on where she is most needed.

At the moment, she senses a kind of calm before the storm.

»You can feel this expectation among everyone that this will at one point get more intense.«

Health authorities expect that the burden on the health system will culminate on the other side of Easter, and this will require a lot from the people working in the country’s intensive care units, like Frederikke Prætorius.

You can feel this expectation among everyone that this will at one point get more intense.

From Italy, we have seen horrifying images from overcrowded hospitals. And even though the Danish situation seems to be more stable, a storm is brewing for Danish hospitals too.

With her ventilator specialty, Frederikke Prætorius can expect to come into contact with patients who have been so badly affected that they cannot breathe on their own.

»I imagine things are going to get really rough. And you may never know if a tough situation is waiting for you at work when you show up, no matter what day it is. You can’t go around thinking »Oh no!«, will things get worse tomorrow, or will things get worse in a week,« says Frederikke Prætorius, who is studying on her ninth semester.

»When it’s this hard, you have to talk to your colleagues about it, and – even though this may sound cynical – not think about it when you go home. It’s important to be able to process your working day, and that will be even more important in the coming weeks.« 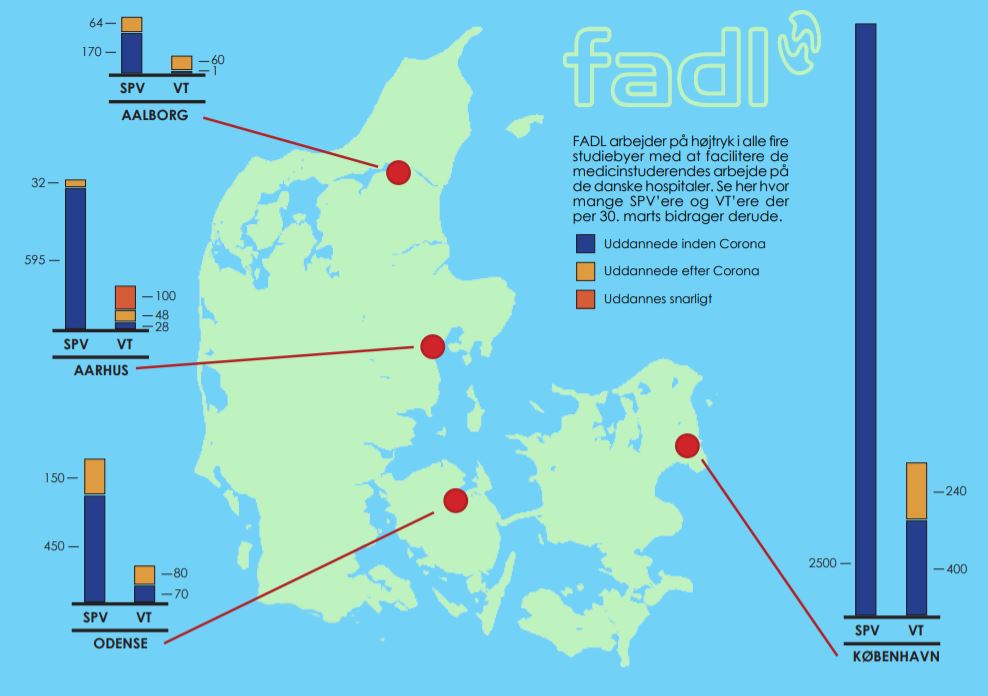 Graphics from FADL on student contributions during the corona epidemic from the end of March 2020. VT means ventilator specialty, SPV means nursing substitutes.

She feels ready to take on the responsibility that lies ahead, she says.

And medical students generally are, according to the president of FADL Claas-Frederik Johannsen, even though they are now being pushed forward to the frontline during the epidemic.

»The students are well up to this task. They are used to working with people who are in the midst of deep crises, and sometimes dying. But then again: No one is used to being in the middle of an epidemic,« he says.

»I trust that they are professional, but also that they know their limitations. We don’t think medical students can come in and solve everything, because they have not graduated. There needs to be a professional backstop to make sure that they are doing the right thing.«

Will fail an exam if necessary

All the three medical students we spoke to think more about the hospitals than the textbooks these days.

But even if they do work with seriously ill corona patients, they still have to follow the teaching at the University of Copenhagen and study for their exams.

»It’s been hard to concentrate on the reading, I must admit. You think you would prefer to go out and help rather than sit at home with your nose in your books. On the other hand, it will not help things if we lack doctors later, because we have all postponed our studies,« says Frederikke Prætorius.

»If the sacrifice for doing something for society is getting behind on your syllabus and maybe failing an exam, then it is worth it. My priority is to be part of the corona response.«

Ibrahim El Haddouchi may be someone whose programme of study has been affected the most.

He should have been in the clinic, that is, in a compulsory internship at a hospital, as part of his eighth semester. But due to the corona outbreak this has not been possible. Instead, he now works in three different job roles, including one as a nurse and as someone with a ventilator specialty.

He says that this part will be missing from his own education. But he also knows that his efforts during the corona crisis will give him valuable experience.

Not to mention the value of it to society.

»When we’re done with one of these busy shifts and are able to take a deep breath, we will look at each other and feel a bit of pride. Because we know that we have not only helped a hospital ward, but the whole community.«