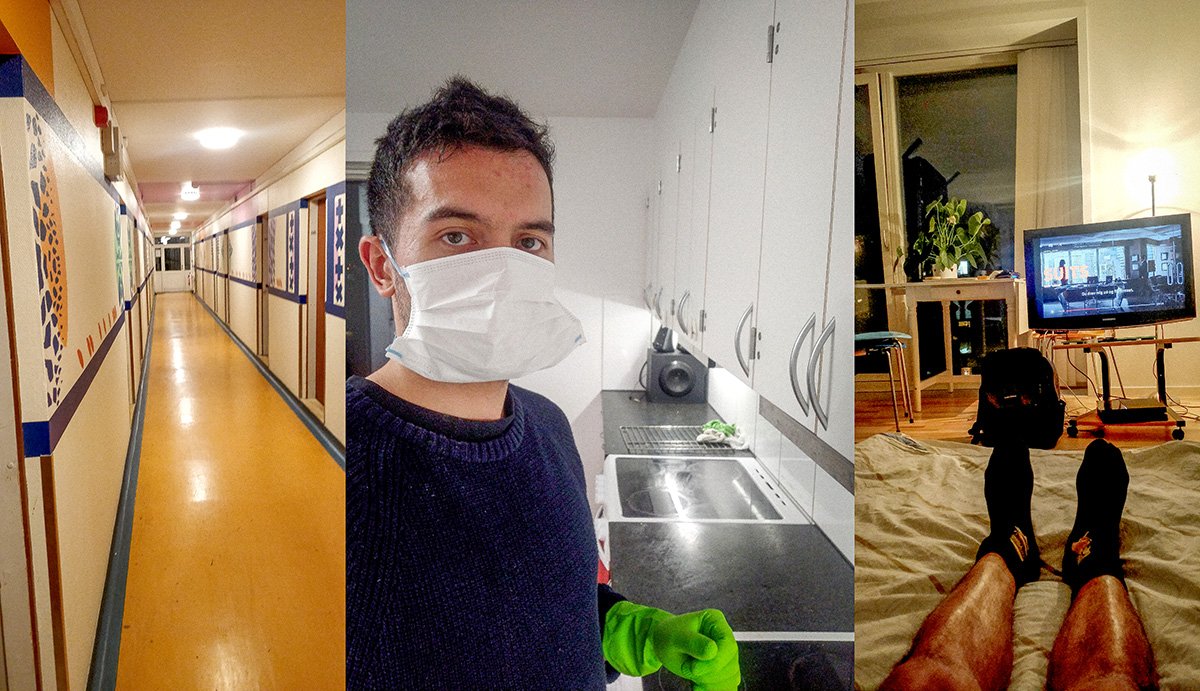 Scenes from an isolated life. Frederik Luis Mogensen tries to use the shared kitchen wearing rubber gloves and mask.

The authorities have not given clear guidelines on how to adapt to life in residence halls during the corona crisis. So when students share kitchens and other facilities, they have to improvise.

The University Post calls Frederik Luis Mogensen on day 14 to find out what life is like for quarantine-stricken students.

»It’s kind of anticlimactic right now because I’m out walking,« he says, laughing on the phone. »I’ve been indoors for 10 days straight.«

Frederik Luis Mogensen is a school and leisure education student at the Copenhagen University College. He is 26 and lives at the Rebæk Søpark residence hall in Hvidovre. He has been in quarantine here ever since his doctor told him he had symptoms like someone infected with coronavirus.

»It started before last Sunday, two weeks ago. I got a headache in the evening, and on Monday it escalated with the symptoms that are COVID-19 or flu,« says Frederik Luis Mogensen. »I started to feel like I caught a cold, with a bit of a fever and headaches. It was very uncomfortable. I just stayed in bed all day. I couldn’t get up and about.«

The worst symptoms gradually subsided. But what do you do when you may have been corona-infected while living in a dorm and sharing a kitchen with 14 others?

»I had to take my precautions and stay in my dorm room. But the dorm hasn’t made any announcements on the subject. We have to take care of this ourselves,« says Frederik Luis Mogensen. He says he has no problem with it being the students’ own responsibility not to infect each other. But he could use some guidelines.

We stood in each of our doorways, chatting from a distance.

»I felt very uninformed, and I didn’t know what to do at first.«

Frederik Luis Mogensen says that the dorms’ inspectors sent out an email, but it appeared that it was still up to the students belonging to the different kitchens in the college to work out what they should do.

»We held a small kitchen meeting in the hallway where we kept a good distance from each other. We stood in each of our doorways, chatting from a distance,« says Frederik Luis Mogensen.

Alone in the kitchen

It was suggested that the other dorm residents should cook for Frederik Luis Mogensen so he did not have to go out into the kitchen. But nothing came out of it.

»I’d rather be able to cook my own food, and I think it has something to do with your own pride. You don’t want to be too much trouble either,« says Frederik Luis Mogensen.

Instead, the students agreed that Frederik Luis Mogensen should use a mask and plastic gloves, which he was given by his fellow residents. And then he had to write every time he wanted to go out there, so there was no one else in the kitchen at the same time. Extra cleaning was also done. Dish cloths were replaced with tissues, and there is now hand soap at the sink.

»This was a smart way to do it,« says Frederik Luis Mogensen. »But I don’t know how they handle it in other kitchens.«

I have not wanted to go home, even though I haven’t had any symptoms.

The other residents, who belong to the same kitchen as Frederik Luis Mogensen, took their own precautions. Nilay Nielsen, who is 21 and studies Spanish language and culture at the University of Copenhagen, chose to stay in her room for more than a week.

»I did not want to go home, even though I didn’t have any symptoms. I didn’t want to risk infecting my family or anyone else, because you can be contagious during the incubation time before getting symptoms. I think that’s why the infection has spread the way it has,« she says.

Nilay Nielsen has stayed indoors since Wednesday 11 March, except to shop or train. She stays away from the communal kitchen. Instead, she has a freezer, fridge and mini oven inside her 14 m2 room. »I have almost all my food in here,« she says.

Sent back to the dorm from the hospital

Sophie Winther lives at the dorm Filmlageret in Copenhagen. She is 20 years old and studies business economics and psychology at Copenhagen Business School. Over the past two weeks she has been ill, had temperature fluctuations, and has even been admitted to hospital with heart palpitations and difficulty breathing.

Just like Frederik Luis Mogensen, she shares a kitchen with other students and chose to quarantine herself in her dorm room. Her fellow students searched in vain for guidelines on how to deal with the situation.

»We called the responsible person from the dorm and he told us to take care of ourselves, avoid too much interaction, and uphold good hygiene. We had already decided this ourselves, so not much came out of this,« says Sophie Winther.

During her quarantine, she chose not to go outside the door at all. Instead, she got food from her fellow residents.

The feeling that some of your good friends are suddenly scared of you is really unpleasant.

»They put down the food and knocked on the door. Then I had to wait 10 seconds to open the door because those who brought the food needed to get two metres away from the door. My parents also passed some food to me through my window,« says Sophie Winther. She added that the precautions were important.

»I could potentially infect a lot of other people. I had some of the symptoms, and the doctors couldn’t rule out that it was corona, so that’s why I took precautions,« she says.

Despite symptoms and hospitalization, she was not tested for the virus, she said.

The need for reliable information
Sophie Winther says she needed information on how to deal with the danger of infection in dorms. She contacted the government’s corona hotline on coronasmitte.dk and was given some general advice on keeping distance and so on, but she says it could have been more specific.

»It is a lot of people living under the same roof and generally spending a lot of time together. There should have been some kind of statement on how to deal with it. We’re not health personnel, so we haven’t necessarily made the right choices,« she says.

She has found that her fellow residents seemed scared to get in touch with her. During the quarantine, however, she took advantage of her time to do a deep clean, to knit and watch films. But it was tough anyway, she says.

»It was incredibly isolating. I felt all alone, and it was just a strange situation to be in. The feeling that some of your good friends are suddenly scared of you is really unpleasant.«