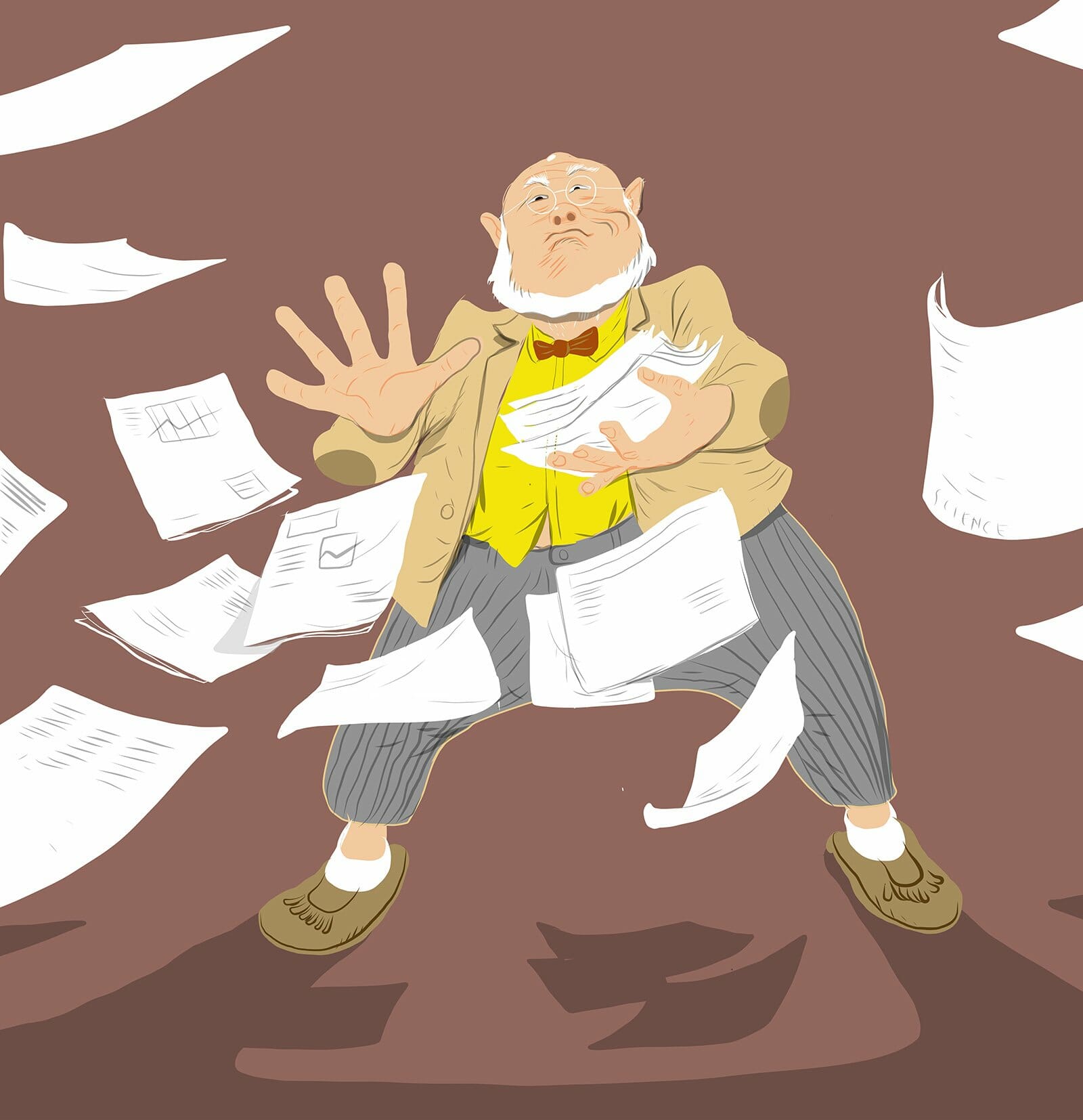 You might think that scientists would write up fewer publications and research when they took on the stressful task of managing staff, students, and other scientists at a university department.

But this is apparently not the case at the University of Copenhagen (UCPH).

This can be seen from data on researchers at the Danish National Research Database that has been extracted and analysed by the University Post.

Heads of department at UCPH published 7.5 scientific articles a year on average in the five years prior to getting their first job as head.

After getting hired as head of department (and beyond), they kept up this research productivity, publishing an average of 6.6 scientific articles a year.

The most productive heads of department/deans at the University of Copenhagen are:

For 10 out of the 28 heads of department analysed, their research productivity actually went up, not down, when they took on managerial duties.

The average annual number of publications stayed at roughly the same level for the current heads of department, deans, prorector and rector at UCPH when they first took on a job as head of department.

»The most outstanding and talented people in a research area, and the people who are the most highly rated, are invariably more productive,«

The group of current managers and heads published an average of 6.6 publications a year since they were first appointed head of department. This is only a marginal 12 per cent decrease over the 7.5 a year that they published over the last five years before they got the job. The data covers all published literature, such as journal articles, conference papers and books.

While individuals’ data points may be inaccurate, our analysis indicates an overall trend of department heads maintaining high publishing productivity, even after appointment.

Amanda Goodall, Associate Professor in Management at the Cass Business School in London, has done years of research in to the question of how well scholars fare as leaders in universities. Her research shows that domain experts, or ‘expert leaders’ are linked to better organizational performance in universities.

According to her, employees are happier when they are led by scientists with deep expertise in the core subject of their department or faculty. If a manager understands, through their own experience, what is needed to complete a job to the highest standard, then they are more likely to create the right work environment, set appropriate goals and accurately evaluate others’ contributions.

That scientists at the University of Copenhagen stay productive in terms of research, even after taking on a role as head of department, comes as no surprise to Amanda Goodall.

»The most outstanding and talented people in a research area, and the people who are the most highly rated, are invariably more productive,« she says.

This, »goes against the grain in terms of the trend for universities to hire professional managers who have had not had a career in research«.

And this productivity can keep up even after appointment as manager.

[There is] “no evidence of a negative self-selection effect in the sense of less successful researchers being more likely to take the position of a dean.”

A German study of deans, ‘The Opportunity Costs of Becoming a Dean: Does Leadership in Academia Crowd Out Research?’ by Uschi Backes-Gellner, Agnes Bäker, and Kerstin Pull examined whether taking on the job as dean affected research productivity.

Research productivity did, on average, decrease for the deans in the German study.

What did we do?

There are 43 people who are presently head of department, dean, prorector or rector at UCPH.

We looked specifically at the 28 who have been heads of department before and including 2017, and who have publication records in the Danish national research database.

But this was only the case for researchers who became deans later in their careers. For early career researchers, the dean job had no negative affect on research productivity.

The authors speculate that »it seems that the late deans undertake a deliberate late career shift, and advance a second career towards serving the scientific community, in which they invest considerable time and resources that reduce their publication productivity during deanship and beyond.«

The authors also found »no evidence of a negative self-selection effect in the sense of less successful researchers being more likely to take the position of a dean.«

The University Post analysis of UCPH heads of department appears to fit in well with Amanda Goodall’s own research and the German study of deans.

And this is good news for researchers who have career ambitions as a head of department and beyond, according to Amanda Goodall.

»Many of the top researchers fear that if they take on this job it will have a negative impact on their research work.  This is a disincentive that stops people from applying in the first place. But the numbers seem to show that their fears are exaggerated«.

Hiring top scientists as university managers can be good for universities, and good for the scientists themselves, according to Amanda Goodall.

»Many heads of department simply want, also, to do research«

Claus Emmeche, Associate Professor at the Department of Science Education

The University Post analysis, and her research into researchers acting as university leaders, »goes against the grain in terms of the trend for universities to hire professional managers who have had not had a career in research,« she says.

Claus Emmeche is Associate Professor at the Department of Science Education at the University of Copenhagen and a philosopher of science who follows the debate on measuring scientific productivity.

He agrees with Amanda Goodall that the new calculations link up to an ongoing debate over whether universities should be led by scientists or by professional managers.

And he offers several explanations why department heads may be able to maintain high research productivity in spite of management obligations.

Department heads get more co-authorships on publications as their careers advance due to their longer experience and network. This would, statistically, make them appear more research productive.

»It is also a job that allows for the delegation of work tasks, with many tasks being delegated to staff in middle management functions. They also have no teaching obligations, unlike normal professors and associate professors,« says Claus Emmeche, before adding that the numbers underscore the fact that »many heads of department simply want, also, to do research« .

Heads of department may, sometimes, have a defined share of their worktime doing research in their contracts. But there is no University of Copenhagen policy stipulating research as a portion of the working day, according to Jasper Steen Winkel, Deputy Director for Communication at UCPH.

There is, however, a »long tradition for managers at UCPH to continue to do research when they are managers. It is up to an individual assessment between the dean and the department head on whether, say, 20 per cent of their working time should be spent on research.«

The University Post analysis has practical implications for scientists who are considering taking on a job as head of department. It highlights the importance of negotiating the right kind of contract when moving into a leadership role, according to Cass Business School’s Amanda Goodall:

»If continuing to do your own research is important to you, then make sure it is part of the negotiation when you discuss the new role« .