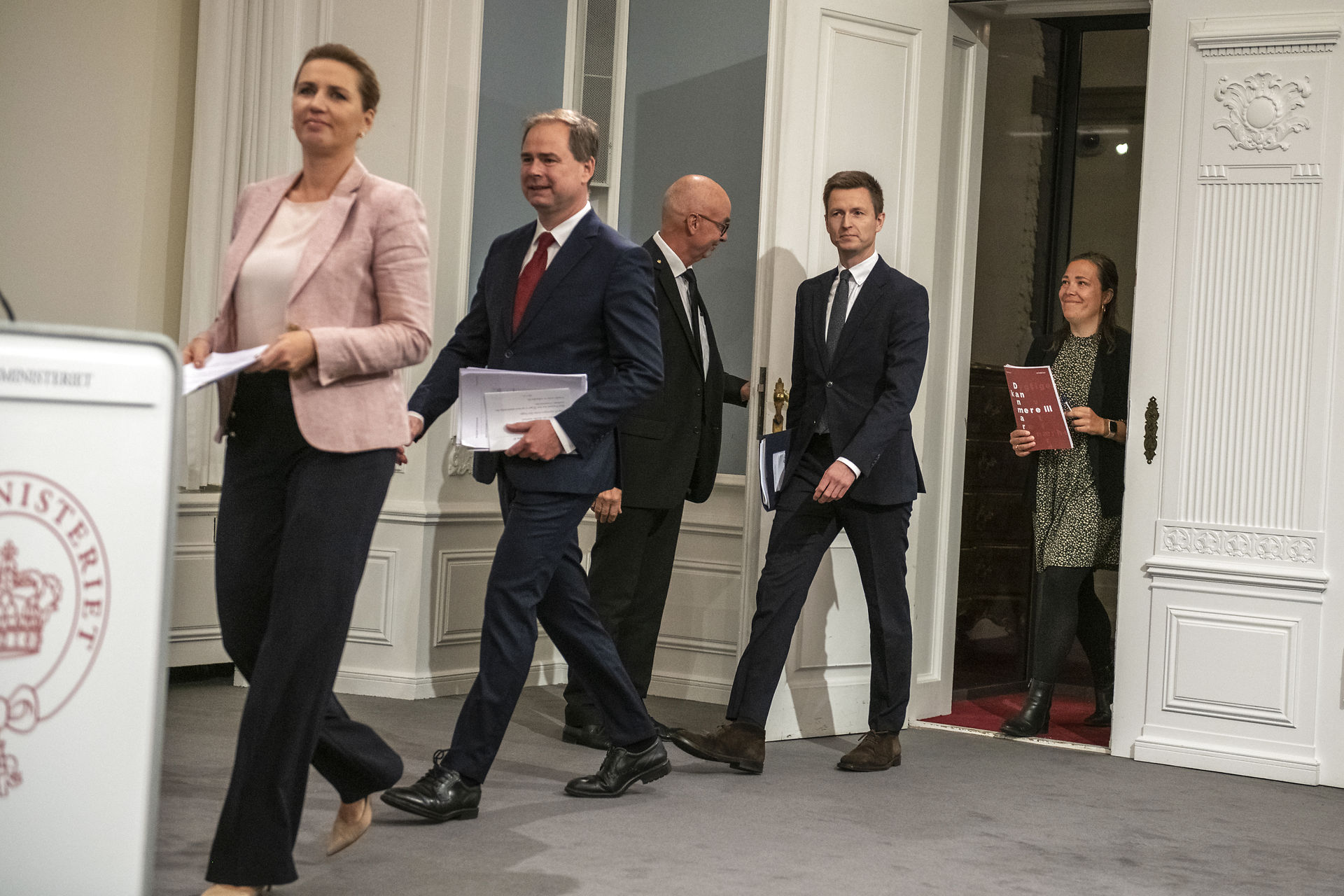 Cutbacks — One half of all places on master's degree programmes at Danish universities should be for shorter one-year programmes oriented towards the labour market, with more continuing education opportunities. This is the government’s new reform proposal.

Minister for Higher Education and Science Jesper Petersen has been hard at work cutting ribbons. First in the provincial town of Esbjerg, where he officially inaugurated a new master’s degree programme in medicine by paraphrasing the lunar landing:

»One short cut – but it will be a huge step for southern Jutland,« he wrote on Facebook 3 September.

Almost two weeks later, he was at it again in southern Jutland. This time in Tønder, where he cut a red electrical cord with a pair of pliers, thereby inaugurating a computer science degree programme at the business college Erhvervsakademi Sydvest.

These new study programmes in Jutland are in line with a major political reform initiative that has just been released by the government. In the ‘Denmark, can more III’ proposal, the most recent of three pervasive reform visions, higher education programmes are to be completely redesigned.

»Knowledge is Denmark’s most important raw material,« Prime Minister Mette Frederiksen said at the press conference from the Prime Minister’s Office, and mentioned that the labour market is in transition.

For the first time, the average Danish education level will be lowered.

»But the way we educate people has not followed. There is, in other words, only one path through university.«

Feed the dog with its own tail

According to the government, a 50 per cent cut to master’s degree programmes will result in financial savings of around DKK 2 billion. This includes DKK 350 million fewer expenses to student grants, 450 millioner fewer expenses to government ‘taximeter’ subsidies to universities, and DKK 1.2 billion in savings from the effects like higher employment levels. This money is to be re-invested equally into master’s degree programmes on the one hand, and so-called »welfare study programmes« including vocational and business colleges on the other. This will ensure more teaching, smaller classes and better counselling. It will increase the quality of the master’s degree programmes despite the shortening of them, according to the proposal. There has already been loud criticism of the proposal which is said to »accommodate voters in the periphery of Denmark.«

The government’s supporting party the Socialist People’s Party’s (SF) education spokesman Astrid Carøe is annoyed by the proposal’s claim to improve quality, at the expense of the length of the degree programmes.

One-year master’s programme with at least 15 hours of teaching and supervision a week, at 75 ECTS. It will be oriented towards the labour market, and 35 per cent of graduates will have a one-year degree. This will be mostly for humanities and social science programmes.

Two-year master’s with 120 ECTS credits over two years. To be targeted students who want to do research or who have highly specialised job functions in technical areas or natural science subjects. The goal is for 50 per cent of graduates to have a specialised two-year master’s degree programme.

»When you cut a whole year off the programme, you end up with fewer teaching hours overall and less hours of immersion. There is an element of coercion in this, when you cut the two-year master’s degree programmes so strongly. I find this concerning,« she says.

The Socialist People’s Party intends to be critical of the plan when it enters the negotiations. As it is now, the party will not put its votes behind the proposal, according to Carøe.

Since the Danish newspaper Politiken could reveal parts of the proposal 21 September, it has been met by massive, widespread criticism. Danish universities’ quality will be hard hit, critics say. Lobby group Universities Denmark has stated that it will lead to a general drop in quality that will harm the business community, society in general and the students.

The Danish Association of Masters and PhDs (DM) are concerned that it will lead to the labour market being divided between an A and a B team. The Confederation of Danish Industries (DI) criticizes the logic of arguing for better education, while cutting a year off education programmes. Lawyer and economists’ union Djøf says the government is gambling with the knowledge society.

On Twitter, the Prorector for Education at the University of Copenhagen, Kristian Cedervall Lauta follows suit.

»Lowering education levels are not appropriate in a rapidly developing society. And it’s not my perception that companies are looking for employees with shorter master’s degree programmes,« he writes.

The Social Liberal Party also sees the proposal as a step in the wrong direction. Education spokesman Katrine Robsøe calls the proposal a »historical experiment«.

»I really don’t see the point of it. For the first time, the average Danish education level will be lowered. This is the wrong way to go,« she says.

She does not understand why the government wants to cut back on master’s programmes to help vocational and business colleges instead of prioritising both. She agrees, however, with the goal of more teaching hours, more counselling and more feedback on the study programmes.

»This should be done by adding new funding to universities. In the proposal they release an amount for the study programmes by shortening them. It is like feeding a dog with its own tail,« she says.

At the press conference, Minister for Higher Education and Science Jesper Petersen refers to a survey of new graduates from 2021, where 42 per cent say that the transition from education programmes to jobs is difficult. This is part of the reason why the new one-year master’s degree programmes will be better oriented towards the labour market, while the two-year programmes will be reserved for upcoming researchers or for highly specialised knowledge.

»We also propose that there should be better opportunities to take more education later in life. Working lives are getting longer, the labour market is changing, so why should you take all your education before you enter the labour market?« he asked at the press conference.

The new initiative is based on recommendations made by a reform commission in the report ‘Reform Paths 1’ from April this year. The recommendations included turning 70 per cent of humanities and social science master’s degree programmes into one-year courses, and converting the Danish SU student grant to a loan on the master’s programme. At the press conference, Mette Frederiksen stated that they do not want to tamper with the Danish SU study grant for fear of negatively affecting social mobility.

Both the Socialist People’s Party and the Social Liberal Party were critical of the recommendations made by the reform commission. They were however sympathetic towards a one-year master’s programme more oriented towards the labour market.

»I am convinced that a one-year master’s degree programme could be interesting for some people. But we would like to see this being carried out voluntarily rather than [the government] halving the master’s programme,« says Astrid Carøe, educational spokesman of the Socialist People’s Party.

When it came out that the government would release a reform proposal for the master’s degree programmes, the Liberal Party quickly came up with their own proposal. The party proposes four tracks that the student can take in the future. In addition to the classic two-year master’s degree programme, the Liberal Party advocates a one-year 75 ECTS credit programme, and a business-oriented master’s alongside a job with either 75 ECTS credits or 120 ECTS credits over the course of several years.

In addition, the party wants to increase the master’s degree programmes government ‘taximeter’ subsidy funding for better teaching, and to allocate DKK 400 million to vocational education and training programmes. The money for these investments will come from a proposal to cut the sixth Danish SU student grant year.

Liberal Party chairman Jakob Ellemann-Jensen also believes that the one-year master’s degree programme is a key way to go when it comes to reforming higher education.

»Today we, in principle, educate too many master’s students to become researchers and study for a PhD. We need those also, but not that many of them,« he said to the Danish news site Berlingske after the release of their own reform proposal.

The government’s proposal is too far-reaching, according to the chairman.

»The one-year master’s and business master’s degree programmes need to be an extra offer to young people who want this opportunity,« he says in an email response.

Education spokesman for the Social Liberal Party Katrine Robsøe agrees that the shorter master’s degree programme should be seen as an alternative path through a study programme.

»I would like to talk about opportunities and flexibility in higher education, not coercion and cutting degree programmes back by half,« she says. She points out that the Social Liberal Party is not in favour of cutting the sixth SU student grant year.

It has not been possible to get a comment from the Conservative Party, but Mette Abildgaard says to the Danish broadcaster DR that she is in favour of the proposal.

»There are a large number of our study programmes which, without affecting academic standards, can be made shorter. This while at the same time strengthening the academic standards during the period that the degree programme runs,« says Conservative political spokesperson Mette Abildgaard.

After the government’s reform proposal, a reform committee will be set up to involve universities, students and employers. According to the plan, the first graduates of the one-year higher education programme will graduate in 2029.