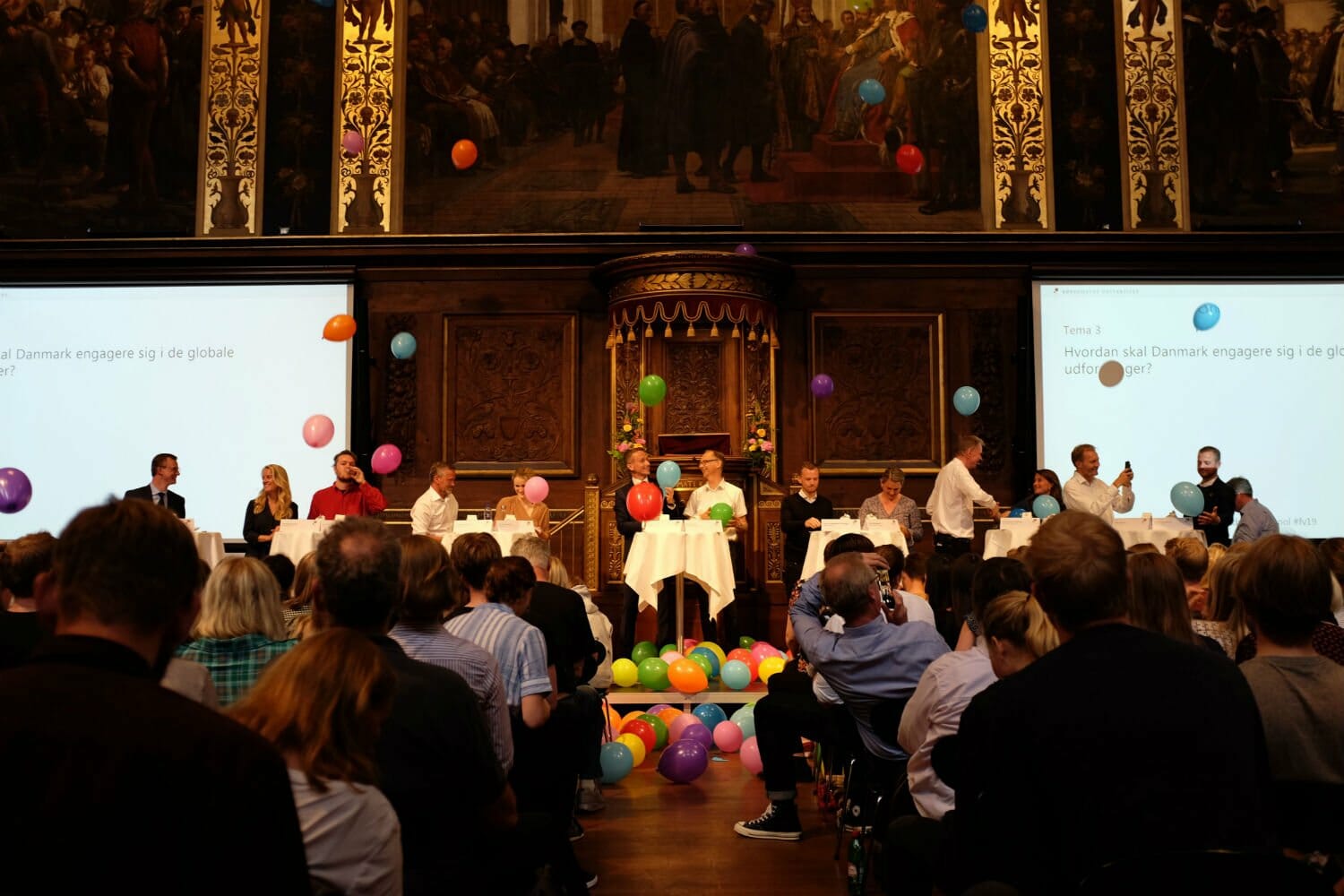 Politicians were bombarded with balloons after Tuesday's election debate at the University of Copenhagen.
image: Lene Munk

Danish parliamentary elections — Prominent Danish politicians have dived headlong into education policy in recent days, and with a major election debate at the University of Copenhagen. Everyone turned up armed to the hilt with election promises. But while the promises were all about stopping the haemorrhage in funding, there was not much new thought.

After an election campaign that so far has been characterised by climate change, a pensions initiative, and integration policy, the politicians finally took on education at a debate Tuesday.

It started with a debate on TV 2 between Morten Østergaard (Social Liberal), Mathias Tesfaye (Social Democrat), Anders Samuelsen (Liberal Alliance) and Kristian Jensen (Liberal) at the University College Copenhagen and continued at the University of Copenhagen, where all the parties except the far-right Stram Kurs party debated the education theme.

The election promises that were churned out from the major parties often fell into one particular category: The politicians rebelled against the austerity policy that they themselves had been responsible for in recent years. And they ring fenced the subsidies and benefits that the present government had previously earmarked for cuts.

But you would have had to look far for new ideas and ambitions in the area. It was, as the Rector of the University of Copenhagen Henrik Wegener, phrased it, most of all a guarantee that things will not get worse.

»But this is at least a start,« said the chairman of the Student Council Mike Gudbergsen.

Here is a short overview of the promises that the politicians have nailed themselves down on in the heat of the election campaign. Promises which all appear to have the support of a majority in parliament at Christiansborg:

It is now clear that a large majority in parliament wants to do away with the controversial so-called reprioritisation contribution cuts to education. The year-on-year cut has taken two per cent off educational institutions’ budgets every year since the government introduced it in 2015. In September of that year it forced the University of Copenhagen to cut 700 full-time jobs (and since then the Faculty of Humanities has been through another round of layoffs).

It is fair to have to require that when you have had your study programme paid for by the taxpayer, that you give this programme a chance.

Mette Abildgaard, chairman of the parliamentary group and political spokesman for the Conservative Party

But enough is now enough.

In the election debate at the University of Copenhagen, the Danish People’s Party chairman Peter Skaarup said that they have carved off all the fat, and have now reached the meat. Implied: It’s time to stop carving.

The statement was the same from the Minister of Finance Kristian Jensen (V):

»I stand by the fact that we introduced the reprioritisation contribution in 2015, but we did so because we believed that the financial situation required us to get it corrected. Today, we are in a completely different situation… our strong economy should also return to the study programmes, and that is why we plan to abolish the reprioritisation contribution,« he said.

The same change in attitude could be seen among the Social Democrats as early as September last year. And the other day, the spokesman for education and research Mette Reissmann outlined the new position in the Magisterbladet magazine – without guaranteeing however, that the funds will go back to the places they had been taken from:

»We are not going to bring back the funding, krone for krone, back to the individual institution. But when we say that the money will stay in the sector, then it is the whole education sector,« she said.

Cap on education programmes to be abolished

The 23rd March 2018 a majority in the Danish parliament voted down a citizens initiative. More than 50,000 people had petitioned for the cap on the number of education programmes that a student could take should be abolished. But it quickly became clear that the parties at Christiansborg did not agree.

Among those who rejected the proposal were the Social Democrats, who helped introduce the cap in 2016 together with the VLAK coalition government and the Danish People’s Party.

It has meant that students have felt they cannot make any mistakes. But you should be able to do this.

But less than three months later, Mette Frederiksen (Social Democrats) proclaimed at the Folkemødet political festival that the party was still willing to abolish the cap.

Now the Liberal Party has also, almost, approved the proposal. In the TV news on DR1, Minister for Higher Education and Science Tommy Ahlers said that the consequences of the cap were too large, even though Prime Minister Lars Løkke Rasmussen had previously state that they were a sign of »responsibility«.

»We have defended it, but I can feel when I talk to the students. it has meant they felt they cannot make any mistakes. But you should be able to do this. That is why we are now saying that we want to abolish it,« Tommy Ahlers said to DR.

There was a ‘but’ however: The party will only abolish the cap on education programmes if it can be financed without tax increases, and Ahlers has revealed that he does not have any suggestions himself on how this is to be done. According to a response from the former Minister for Higher Education and Science, Søren Pind to Jacob Mark of the Socialist People’s Party, the government will lose out on DKK 300 million a year in revenues if the cap is abolished.

No matter what, the Conservative Party is now the only party behind the law against taking multiple education programmes that still defends it.

»Like everything else, it’s all about how we use scarce resources. And in the Conservative Party we think that it is fair to require that when you have had a study programme paid for by the taxpayer, then you should give the programme a chance,« said parliamentary group chairman and political spokesman, Mette Abildgaard, during the debate at the University of Copenhagen.

Extension of the taximeter subsidy increase

This was the message in a recent featured comment in the Jyllands-Posten daily, signed by a group of Danish rectors, including Henrik C. Wegener from the University of Copenhagen.

In the latest budget, the VLAK governing coalition and the Danish People’s party had agreed to get rid of a planned boost to the universities’ ‘taximeter’ funding from 2020.

It sounds technical. But it is serious business for universities: The promised taximeter boost had promised a subsidy to the humanities and social science programmes at the lowest rate – rate 1. The subsidy ensures that the study programmes that receive the lowest subsidy per student full-time equivalent get DKK 5,000 extra per student.

In the featured comment, the rectors estimated that the removal of the taximeter boost will result in new DKK 280 million cuts. And the cuts will hit the study programmes that have already been cut to the bone.

The debate on Tuesday alleviated these fears however.

We have an international study environment, but we also have a challenge, in that part of the SU student grant goes to foreign students who subsequently return home.

At first Mathias Tesfaye, Anders Samuelsen, Morten Østergaard and Kristian Jensen said they would not remove the boost to the government subsidy in the TV2 election debate. And at the University of Copenhagen, all of the candidates put up their hands when the moderator Mikkel Vedby Rasmussen asked who was willing to continue the subsidy.

Subsequently, Rector Henrik C. Wegener said to the University Post that he still needed a response on whether the parties had a permanent or a temporary extension in mind.

As the Minister of Finance Kristian Jensen said during the debate: »We need to negotiate this when we need to finance a budget in the autumn.«

If you were worried about the Danish SU student grants, the TV2 education debate was a relief.

»Nothing is going to happen to the SU, apart from the fact that students need to have a be able to earn more money on student jobs, without deduction, if they have the time and energy to do it,« said the Minister for Foreign Affairs and chairman of the Danish Parliament’s most free market liberal party Anders Samuelsen (Liberal Alliance).

Mathias Tesfaye (S) and Morten Østergaard (R) both declined to cut back on the student grants, and the Minister of Finance Kristian Jensen followed their lead.

The minister did say, however, that it is a problem when international students come to Denmark and get SU student grants, only to leave the country after graduation.

»I think we need to find a balance. We have an international study environment, but we also have a challenge, in that part of the SU student grant goes to foreign students who subsequently return home. We need to look into this,« said Kristian Jensen.

The Council of Economic Advisers had previously recommended changing the SU student grant into a loan for master’s students. And earlier this year, the government set up an expert committee that would look at the consequences of the current SU system.

But if you are to believe the election talk, there is no prospect of wide-reaching reform. And this no matter who is in power after the upcoming Danish general election.