Intro week: who bears responsibility for the pig heads and herring gags? 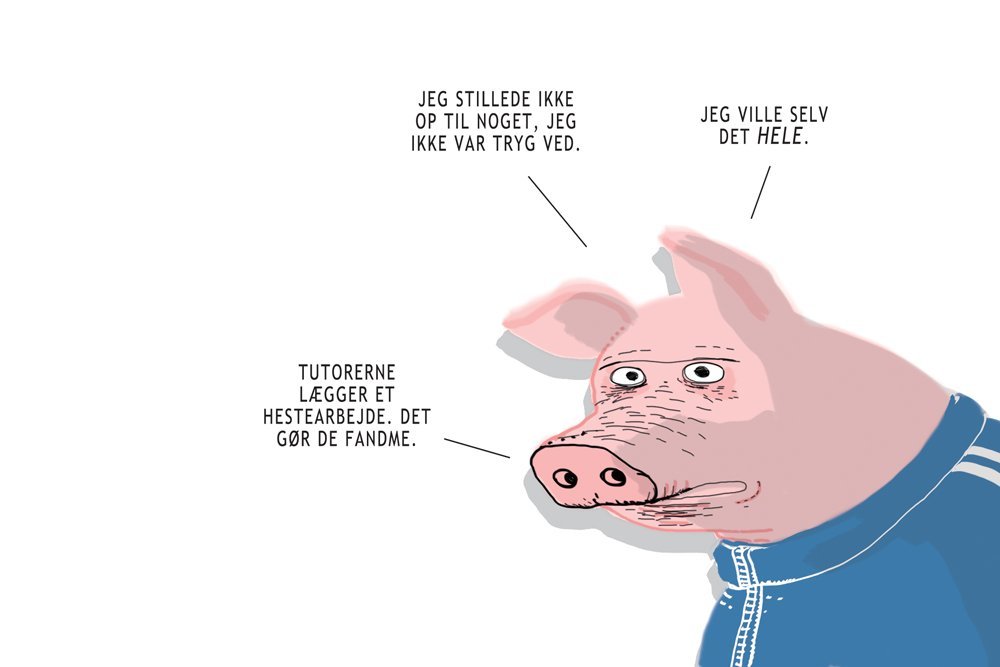 A few years ago, political science students caused a media storm after an intro week party that involved a gag with pig heads. At Food and Nutrition, herring in curry sauce has also become the centre of a similar debate about inappropriate intro week activities. (Image translation: "Tutors do a tough job. I didn’t do anything I wasn’t comfortable with. It was what I wanted")
image: Christoffer Zieler

Intro week — Is it only individual tutors who should foot the bill when an intro week party goes overboard? Or does the problem run deeper? New research shows that there is a link between introduction week activities and the culture within a specific academic field.

We know the drill. A student comes out to media with a damning critique of inappropriate activities they experienced at an intro week camp or party. The comments section explodes. By the second day, management at the relevant institute has written a column in the same media. They apologise and will introduce new rules for teaching staff and student event organisers.

Once again this year, the media have reported on intro week camps and parties characterized by embarrassment-inducing gags, strong peer pressure and sexism. However is it exclusively the students’ fault when intro week activities go too far? Or do the staff who teach the students daily also bear responsibility?

Ph.d student My Madsen says the answer is easy. Her research at the Institute for Anthropology shows that intro week activities reflect a broader social culture within specific academic programs and faculties. Instead, she suggests that rectors, program heads and teaching staff do more than just try to distance themselves from the stories giving their institutions a bad rap.

Where does the idea come from?

Madsen has delved deeply into the issue. As part of her Ph.D research, she enrolled at DTU and started with the new students, joined their intro week parties and participated in classes. Six months into the project, she took up the studies as a vector (a tutor at DTU, ed.) and thus planned and carried out an intro week for the coming year’s new students.

Of course, it is the students who carry it out. And because they do it in a grotesque or distorted way, you see it more. But it doesn’t just come out of thin air

Her conclusion was clear: There is a clear connection between the culture of an academic program and the social culture at the university. Values expressed by teaching staff and management were reflected in the intro week activities.

“There is a good connection between intro week and the ideals communicated by management and professors at DTU. This is a very large system, which places value on collecting information from the new students, and trying to include all the relatively different, new students.”

Even when it appears the students just carried out activities that are completely normal for intro week, they were styled in an “engineering” type of way. At DTU, this meant that winners were less prioritized, while collaboration and innovation were prized.

Does this mean that we can trace inappropriate and transgressive activities and conduct directly back to institute management? Was it actually the institute head, Lars Bo Kaspersen, who was responsible for the whole media storm around pig heads at the political science intro party back in 2014?

It feels like a stretch. Madsen stresses that it cannot be thought of as a direct causality. But that is not the same as saying that a study program’s culture at an institute is completely innocent of blame.

“You can’t translate it as, if the students are asked to do an activity like gag on a banana during into week, that it means one-to-one that the study program is just made up of macho idiots. But there is something at play that leads those students to think such an activity is fun.”

You can’t translate it as, if the students are asked to do an activity like gag on a banana during into week, that it means one-to-one that the study program is just made up of macho idiots

Humour in a study program can be expressed in a grotesque or exaggerated way during intro week. However Madsen insists that this is still connected to a broader culture within the program.

“Of course, it is the students who carry it out. And because they do it in a grotesque or distorted way, you see it more. But it doesn’t just come out of thin air.”

There are many wild tales of intro weeks, and political science rarely escapes without a mention. There was the pig’s head, the nutella fists or sexually explicit stories as an initiation ritual which unleashed a media storm back in 2014.

But the future politicians and bureaucrats are not the only ones to carry out inappropriate intro week activities. In August, UCPH food and nutrition student Amalie Himmelstrup, criticized her intro week in Danish newspaper Politiken. During her intro week, she was asked to suck whisky out of unwashed socks, eat yeast and lick herring in curry sauce off the other students. “Why?” she asked.

“You can participate in team building exercises and break out of your comfort zone without having to lick curry sauce off one another,” said Himmelstrup to Danish media Ekstra-Bladet.

This was the same year that political science attracted a media frenzy. UCPH had just introduced the, but both that and other rules were not upheld, according to Himmelstrup.

From Madsen’s perspective, this reaction from management was symptomatic. But there needs to be more than rules to change the culture at an educational institution. According to the Ph.d student, it’s about turning the gaze inwards.

“The program’s management often takes responsibility by attributing the blame to the students. I have not been able to find examples where professors or management have said “this gives food for thought about how we manage our study program.” I think that is interesting, because my research shows that there is a connection between how the study program has been delivered and how intro week activities are carried out.”

I am not the one to discover that there is a connection between academic culture  and how you behave socially within a study program. This is something which has been established by previous research

Madsen’s research presents intro week as a system which integrates the students into a new social sphere. The new students are perhaps particularly susceptible to influence from older students and professors. But the idea that the academic field and the social culture are connected is not new.

“I am not the one to discover that there is a connection between academic culture  and how you behave socially within a study program. This is something which has been established by previous research.”

The problem is, intro week is often seen as something beyond academics. Instead, Madsen proposes two strategies to address intro week problems. First, she points out that it is important to support the students by giving them resources to investigate how intro week is experienced by new students, and where there is room for potential change.

Second, management and academics should be aware of how the students’ conduct can reflect an internal social culture within an educational institution.