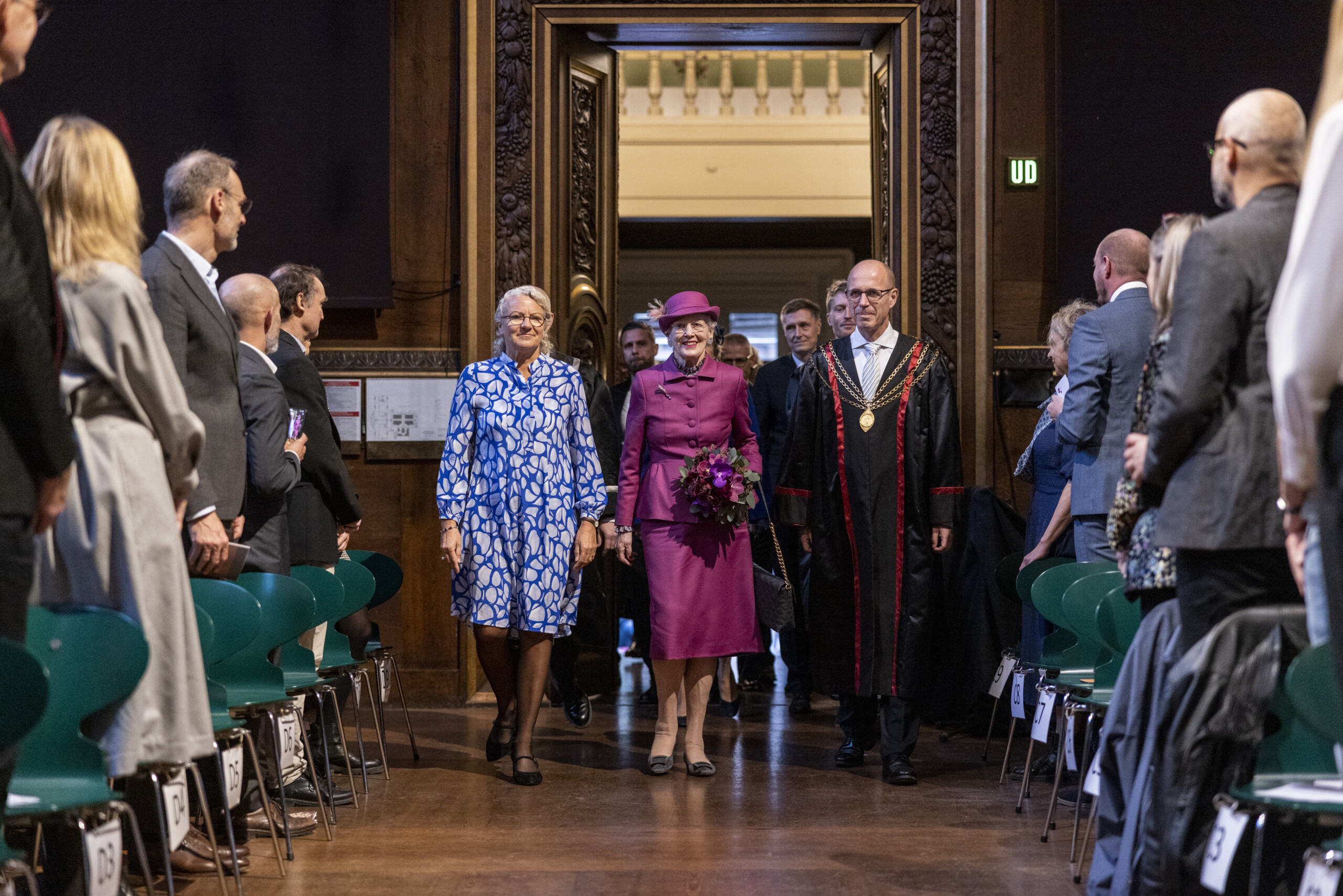 Chair of the Board of the University, Merete Eldrup, Her Majesty the Queen, Rector Henrik C. Wegener.
image: Nikolai Linares

The University of Copenhagen's Commemoration 2022 was marked by a strange combination of ceremony and activism.

The red carpet zig zags up the stairs to the university’s main building on Frue Plads. This red is repeated on the banners held by a group of students who have taken a stand on both sides of the carpet with words like STOP, TYRANNY and DEAN RULE highlighted. Their criticism is directed at one of the six deans who will soon be marching up the floor in their ceremonial dean’s robes and receive applause from the hall.

It is an odd mixture of ceremony and activism that characterises the University of Copenhagen’s annual celebration on 25 November 2022. The hall is splendid as always, and the guests are there. When the University of Copenhagen celebrates itself once a year, it is the university’s management, student and employee representatives, and this year’s honorary doctorates, doctors and prize winners who are invited to mingle with people from research councils, foundations, ministries and other close partners of the university.

There are many bald heads and lots of grey hair among the university’s friends circulating and greeting each other warmly. And then there are also a group of students and junior graduates who have written prize papers and who are to be honoured with the university’s silver and gold medals. Honorary doctorates from abroad need to be acclaimed, and the Danish doctorates of the year need to be celebrated. And there is a tall dude with scruffy hair and colourful clothes who sticks out from the discrete charm of the assembly. It is designer Henrik Vibskov, who is not someone who has come to the wrong party — he himself has said that someone in his neighbourhood once mistook him for a tramp — but someone who this year has decorated the porcelain owl that is awarded to the Lecturer of the Year.

Esben Bjørn Salmonsen is the chair of the Student Council, a position that gives access to the Ceremonial Hall’s fine lectern with a Greek inscription on it that means in spirit and truth. He’s going to hold the student speech in a while. He is not that nervous, because he has spoken to large gatherings before, he says to the University Post. But he does note that this is clearly more than the beer crate from which he is used to talking from.

Suddenly all the chattering stops. Her Majesty the Queen arrives in the hall with her entourage. And what does she have to pay attention to during the next couple of hours? Several different voices, which together can be said to make out the key message: Leave the university in peace. 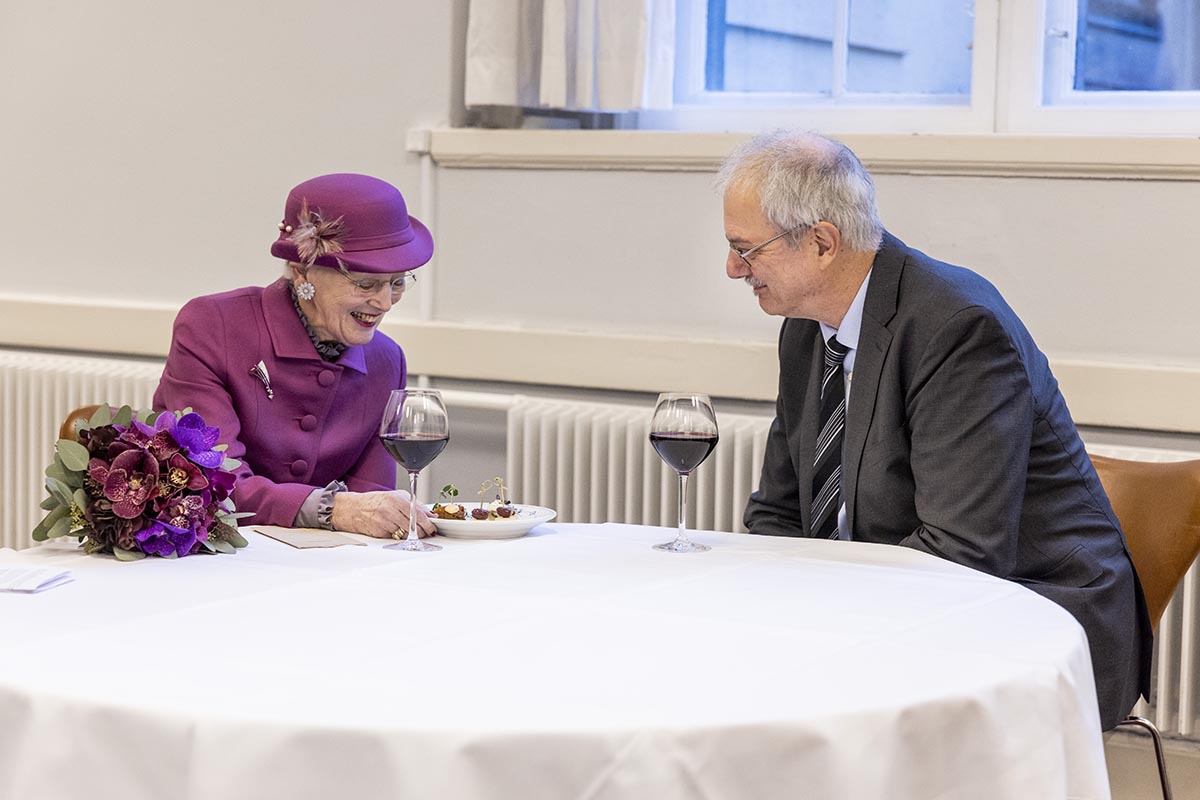 The main characters of the day. Nobel laureate Morten Meldal on the right.
image: Nikolai Linares

The Chair of the Board of the University Merete Eldrup is the first speaker. »Are you listening, private foundations and ministries?,« she asks, because her speech is primarily aimed at those who set the framework for research: Have confidence in the University of Copenhagen, because academic freedom is the university’s most important prerequisite. The contradiction between free and applied research is a false one, because free research also generates growth, she says with reference to the Nobel Prize winner Morten Meldal’s research which the pharmaceutical industry benefits from.

AWARD WINNERS AT THE ANNUAL CELEBRATION

The Innovation Award was awarded to Associate Professor Brian Lystgaard Dove of the Department of Nordic Studies and Linguistics.

Doctors of the year

And to the politicians, she says that a future government must think carefully before it starts to tamper with master’s degree programmes. There have been far too many piecemeal reforms over the past many years, and several of them have had to be rolled back after a few years.

There is no acting minister in the chamber, so it may take a bit of luck to have this appeal reach the politicians in charge in the Danish government buildings in Slotsholmen.

Rector Henrik C. Wegener’s messages are in continuation of the ones from the Chair of the Board. Science requires three things, he says: Time, faith and patience. He is at once lyrical and gloomy when he says that the current crises seem to have been synchronized. He sums up the world as it is and says that the university is the beacon that can light (up) a world where there is only darkness.

Read the full speech here: Rector: »What is the opposite of inflation? It is university innovation«

The student speech also calls for more faith – but the students have their gaze focussed on the senior management in the room.

Give the students who work as tutors, or who are in the university’s 382 clubs and associations (yes, the number is correct, the Student Council did the counting) greater freedom, so that our initiatives and wishes are not suffocated in your administration, Esben Bjørn Salmonsen said, and then he turned things up a notch:

»For us students to become active citizens of our university, we need to be seated at the table. You may have noticed when you arrived that many students are dissatisfied with their Dean. And fundamentally, staff and students are not a big enough part of decision making, while management plays too big a role.«

World class (but not the power point presentation)

All of the speakers praised Professor Morten Meldal, who won a Nobel Prize for UCPH after a 38-year long drought in Nobel prizes, as Wegener said. Merete Eldrup said that hard-working people are driving the university forward, and borrowed a quote from a Danish newspaper that wanted to know how Morten Meldal would celebrate his award, to which he replied: Tomorrow, I’m going to teach organic chemistry at the department at 8 am.

Salmonsen said to the foundations that the most talented researchers – like Meldal – need to be inside the classrooms. They should not be exempted from teaching by the foundations so they only do research. And Henrik C. Wegener noted in his tribute that Morten Meldal had used his fame to promote his university political messages.

Wegener had a skinny apple tree with him in the hall. He will graft the tree, which already contained four varieties, with a branch from Meldal’s own apple trees at home, and the message was symbolic:

»Just like research, it is not certain that it will bear fruit the first few years. But if we ensure good growth conditions — time, faith and patience — it will probably grow and give something back, year after year.«

Finally, Meldal was given the floor himself. He thanked everyone for the kind words. He thanked his parents for having dragged him through Danish forests and focussed his attention on the natural sciences. He seemed to thank himself for choosing to study chemistry – a good choice, because it describes everything, he said. He thanked his wife, and his ex-wife, for supporting him all those hours they had to do without him day and night because he was in the laboratory. He thanked his colleagues both at UCPH and out in the wide world, and he offered a huge thanks to that PhD student who had almost given up after months of failed experiments, but that ended up having it all pay off in the form of the click chemistry that triggered the Nobel Prize.

The celebration lecture was about the scientific process, and the University Post has to admit that even though the presentation was backed up by power points with graphics, the idea got lost somewhere between animated enzymes and peptides that looked like Angry Birds. The conclusion, however, could not be misinterpreted: Morten Meldal’s click chemistry can be refined and used in the medical treatment of everything from cancer to obesity and as a basis for broad-spectrum antibiotics, so we do not need to harvest more blood from the Japanese horseshoe crab.

The final points from the man of the day were political: Big discoveries cannot be made-to-order, because randomness plays such a key role. For this reason, researchers must have the freedom to choose which ideas they want to pursue. They need to be able to probe and try things out. They need to be in the laboratories. Day and night, as it happens. It makes no sense to have to make funding applications that demonstrate exactly what we will do over the next five years, he said, setting off a huge round of applause.