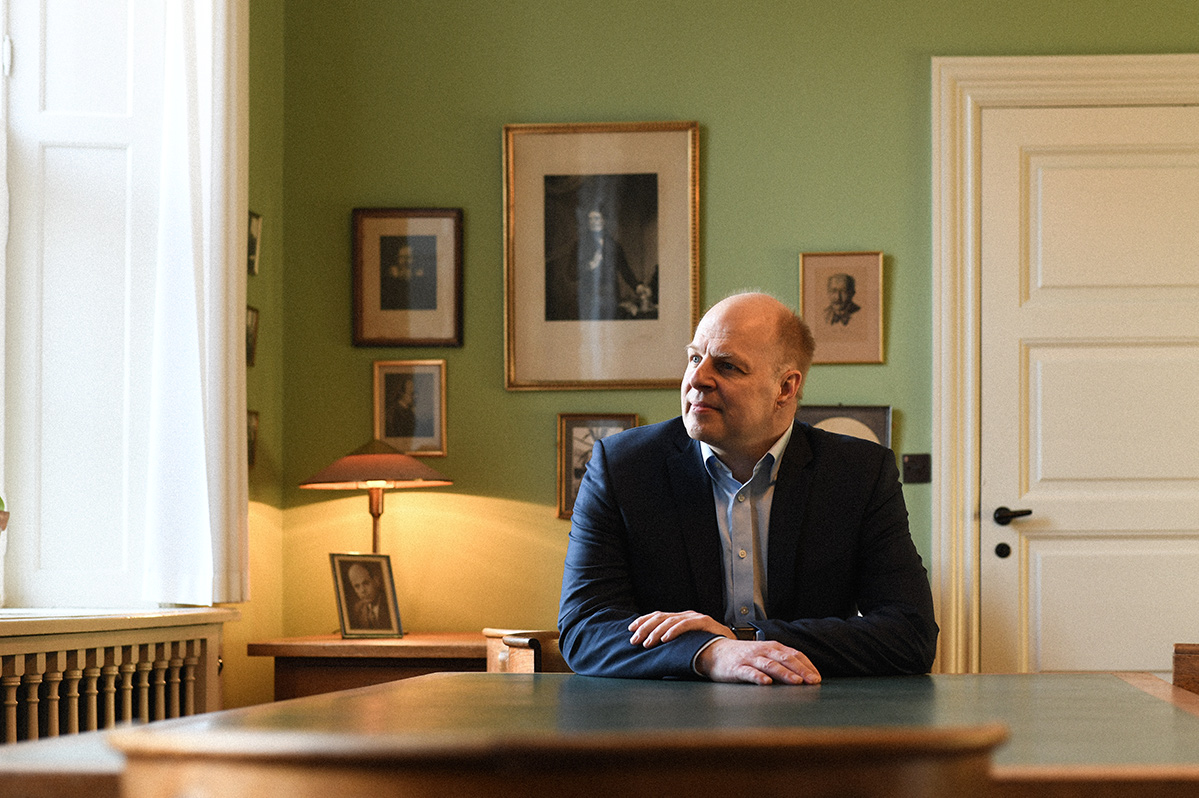 »It is in NATO's interest that we have a technological defence that secures water in the taps and running trains,« says department head Jan W. Thomsen
image: Rasmus Friis

The news that the Niels Bohr Institute is to collaborate with NATO has set off mixed feelings among staff. Head of department Jan W. Thomsen explains that the new centre will mostly strengthen the technological edge over adversaries in the quantum area.

It was with mixed feelings that staff received the news in April that the Niels Bohr Institute at the University of Copenhagen (UCPH) is to collaborate with NATO on a quantum research centre, according to head of department Jan W. Thomsen.

While it was seen as validation of the work of the Institute, and an opportunity for new types of work on quantum technology by some staff, others were more critical because of the military aspects of NATO.

And there have been a number of considerations to take into account before a department like the Niels Bohr Institute enters into partnership with a defence alliance like NATO, emphasises Jan W. Thomsen. He himself believes that the collaboration is far removed from the ‘guns and ammunition’ military aspects of defence.

»The most important thing is that individual employees have the freedom to opt in, or out,« he says.

As chairman, he has been one of the driving forces behind the collaboration, and he downplays the military perspectives of the new partnership.

»When you say ‘military’, you think of rifles and bombs. It is not this at all,« he says.

The centre is instead helping to maintain a technological edge over countries that do »not wish us well«.

The centre, which is to be located at UCPH, is part of a larger NATO strategy called DIANA, the Defence Innovation Accelerator for the North Atlantic. It aims to strengthen high-tech industries like artificial intelligence, robotics – and yes, quantum technology.

The initiative in Denmark will specifically have two pillars: An ‘accelerator’ – a kind of study programme of up to eighteen months, which is to mature companies’ technology for the commercial market – and a test centre and fabrication unit where their ideas can be developed and tested.

»It could be, for example, a small company from Latvia without the local expertise and facilities, that can be aided in developing commercially,« says Jan W. Thomsen.

The department will not develop technology directly for NATO. The purpose instead is to develop a layer of growing companies, that NATO at a later stage will benefit from collaborating with.

»We are not geared towards producing military technology at all. Then we would have to enclose the department in secrecy and barbed wire. We will continue to openly publish our research, but we will work with companies that do have business secrets, who can subsequently deliver technological solutions to NATO.«

Quantum technology can both have military and non-military applications. And Jan W. Thomsen does not conceal the fact that NATO may have an interest in collaborating with companies on a technology of military interest.

»But even there it is a grey area. Some will, for example, call encryption ‘secure people-to-people communication’, others will call it ‘military technology’.«

According to Jan W. Thomsen, there is some distance between what many people associate with military technology, and the technological solutions that he foresees the centre helping. He points out that, in addition to encrypted messages, it can also be quantum technology that prevents hacker attacks on infrastructure.

»It is in NATO’s interest that we have a technological defence that secures water in the taps and running trains.«

Quantum technology can be used to develop computers with much greater processing power than the present supercomputers of today. While a traditional computer works with data bits that represent 1 or 0 as a value, quantum bits, or qubits, may represent both 1 and 0 at the same time.

There has also been a great deal of interest from private companies. Five years ago, Microsoft invested a three-digit million kroner figure in another quantum centre at the Niels Bohr Institute. This means that they now have hired 35 of the department’s graduates in highly specialised positions.

It is precisely this international interest that has Jan W. Thomsen seeing opportunities in the collaboration.

»We are notoriously strong in the quantum area – and we would, of course, like to foster strong collaborations with companies that can increase our growth and opportunities. This will give our graduates unique job opportunities with high salaries and the option to work on the technological front line,« he says.

The NATO partnership will lead to a number of financial benefits to the Niels Bohr Institute itself. The Institute’s employees who want to get involved in the centre will be compensated, and the Institute will be compensated for the use of its equipment. This is money from the Danish government which, according to Jan W. Thomsen, otherwise would have been used for more traditional military funding.

»We have machines that are not necessarily running 24 hours a day. If we can use them more efficiently, and get paid for it, then this is great. The same applies if we need a machine, and we buy a new one from these funds. As a university, it is satisfying that we in this way get some of the funding that otherwise would have been spent on guns and ammo.«

As the University Post has previously reported, Jan W. Thomsen is one of the people behind an open letter from ‘scientists, students and friends of the Niels Bohr Institute’ that distances itself from Russia’s invasion of Ukraine. The letter concludes with a parallel to the Danish physicist Niels Bohr’s activism against the use of atomic weapons. And it seems pertinent to bring this up in relation to the NATO collaboration on quantum technology.

»As Niels Bohr stood up against the usage of scientific progress for violence and destruction, we stand united now to contribute to the long-standing cause,« it states in the letter.

But Jan W. Thomsen finds it hard to draw a parallel between Niels Bohr’s activism against atomic weapons and the current situation with quantum technology.

»These are not offensive weapons. It is about ensuring secure communication between ministries and safeguarding our fundamental infrastructure.«

He acknowledges, nevertheless, that just as Bohr did not predict that his knowledge about the structure of the atom would end up being used for atomic bombs – so it is also unpredictable how quantum technology will be used in the future. One perspective, for example, could be that quantum computers’ immense processing power could be used to break codes, so that you can hack into sensitive systems such as banks.

»But the risk of the abuse of technology is in everything we do. When we do artificial intelligence, it can be used to help read out loud for the visually impaired, but it can also be used for facial recognition by oppressive regimes. We would have to work with these dilemmas, with a NATO centre or otherwise.«

But is there not a greater link between technology and the military here, a collaboration with a defence alliance, than in the other research areas?

»It’s not because I completely deny the link. But there would also be a link between technology research and the military if we did not participate. NATO reads our articles and has employees who understand science. And it may well be fine for us to have our focus in the West, so we can defend ourselves against, for example, cyber attacks.«

Jan W. Thomsen emphasises that it is not the Niels Bohr Institute itself that takes a decision on whether a specific technological solution is delivered to NATO – this will be made by the companies that they assist.

»It may well be that they, at some point, want to work with NATO. But it is their moral boundaries that will be tested when NATO at some point wants to use their technology for, say, communication between armies in the field.«