Owners had never heard of plan for 1,500 youth homes in their own property 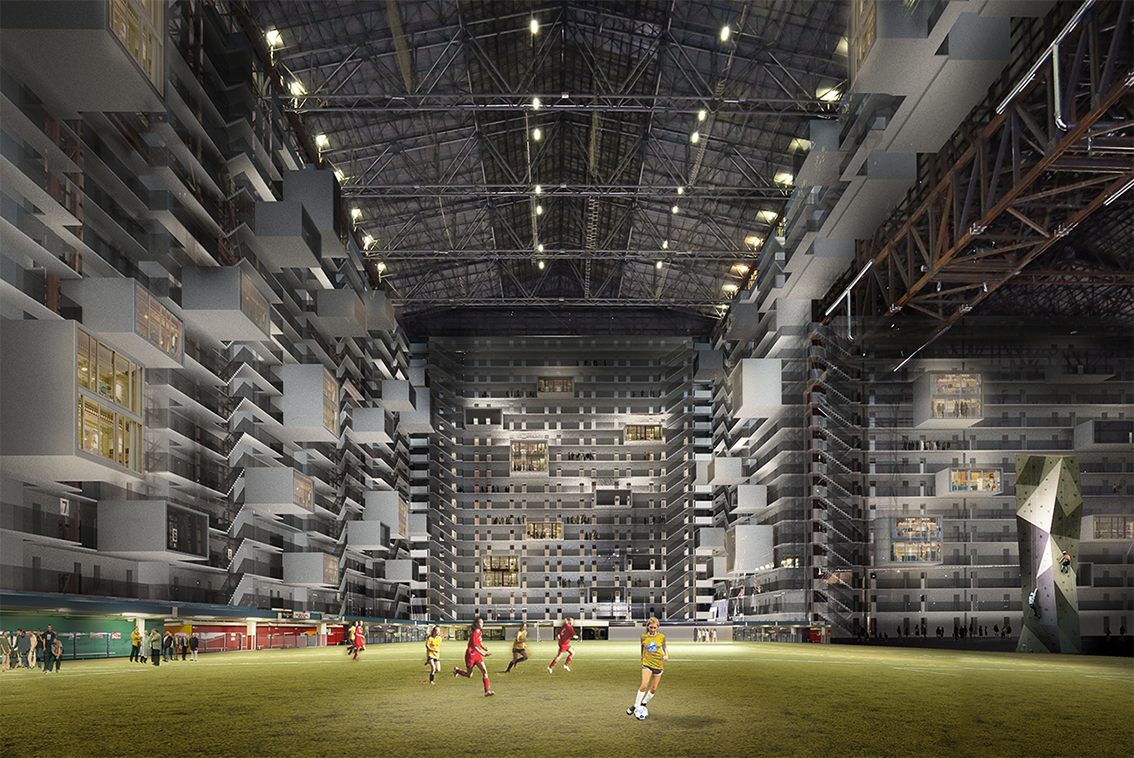 The architects’ visual of a combined hall and alternative housing for a large number of students.
image: Urban Power

Local politician Jonas Bjørn Jensen is collecting signatures in favour of youth housing for a couple of thousand students in the old B&W factory halls in the Refshaleøen island district. The current owners of the buildings had never heard of the project, but they don’t reject it offhand.

The large grey factory buildings of the former B&W shipyard on Refshaleøen in Copenhagen have in recent years been the focus  of the 2014 Eurovision Song Contest, which turned them into a political scandal after a rebuilding to make a concert hall broke the budget.

But if you ask the architects Urban Power, now is the time for yet another renovation. The architects want to line the building with 1,500 to 2,000 student housing units and maintain the interior as a hall where large-scale cultural events can take place.

If this seems familiar, its because the University Post wrote about the project already in 2014. But, according to the City Council representative for the Social Democrats Jonas Bjørn Jensen, the plans have in the meantime been reviewed by Urban Power.

From the architects’ webpage you can see that the drawings of this mega dormitory have also been exhibited at the Venice Biennale in 2016.

Now Jonas Bjørn Jensen is leading an election campaign to collect signatures to gain political support for the construction. He says this is no empty election promise.

“Of course, I am using the attention of municipal elections to draw attention to this project,” says Jonas Bjørn Jensen. “While there is a lot of talk about family housing at the moment, the lack of is not the theme it used to be.”

“The time is right for the project,” says Jonas Bjørn Jensen, who points out that the students have already moved out to Refshaleøen to temporary homes.

The signatures in favour of the mega student dorm are to put pressure on other politicians in the City Hall, because Jonas Bjørn Jensen says that current regulations make a dorm construction on Refshaleøen impossible.

He mentions the so-called Fingerplan for city development and the station principle, that is, that homes should be close to bus and metro.

“I’m in favour of that principle, but I think you can dispense with it when we talk about students. The students are a strong group who can ride a bike,” says Jonas Bjørn Jensen.

“If you want to live on the Refshaleøen, you need to accept that you are a pioneer and there is a lack of infrastructure in this area of ​​Copenhagen. There will not be daycare centers and schools, nor will be the same number of small businesses as elsewhere. But when I come out and talk to students, they welcome the project.”

In addition, the municipality has to give dispensation from an adopted sequence plan,which dictates that politicians develop urban areas, one at a time, in a given sequence.

“This plan may be a good thing, but there is also a trend towards a homogeneous urban development. If we do not use the opportunity to do something about the Refshaleøen district now, we risk it becoming it yet another area with ​​expensive apartments in a few years time.”

But what do the current owners of the Refshaleøen buildings think about the city politician Jonas Bjørn Jensen and the architects’ idea?

The owners are called , and it turns out that they had not hear about the three-year-old student dorm project in their property before the University Post called them up to inform them.

But they don’t reject the idea offhand.

“We are happy that the election campaign has a focus on the Refshaleøen district as future urban development and that students consider the area an interesting place to live,” says planning and tenants manager Claus Hovmøller Jensen.

“We have therefore also backed up the establishment of temporary student housing in the period ahead of an actual urban development. Specifically, the first units were inaugurated on 1st November on one of the area’s most attractive locations at the waterfront,” he says.

“We would like to hear more about the specific project on setting up of permanent student homes in S1 and S2 (the factory buildings, ed.), as there are of course existing tenants and complicated legislation that has to be taken into account.”

Jonas Bjørn Jensen agrees that the owners of the B&W buildings are an important stakeholder if the dorm is to be built, but he says that the first step is to make sure that the regulations allow for it in the first place.

“I have not seen any plan that does as much for the provision of youth housing as this plan. We have done some other things, like turning nursing homes into youth housing, for example, but each time you get the feeling that there are so many more people in need. If we build this project, it will make a big difference, it will be a quantum leap,” he says.