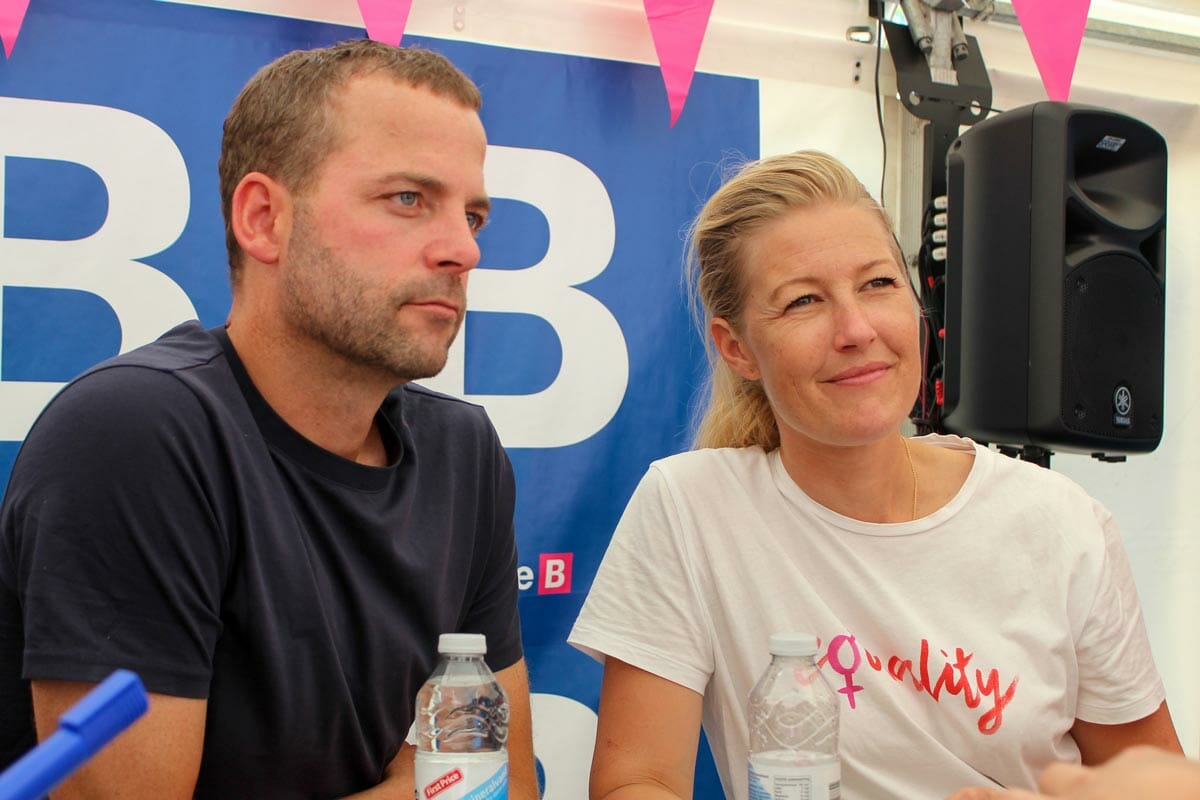 Party chairman Morten Østergaard and Sofie Carsten Nielsen, who have both been ministers for education and science, seen here at the political festival Folkemødet in 2018.
image: Radikale Venstre

Recruitment — Small centrist party wants it to be easier for highly skilled non-Danes from countries outside the EU to apply for jobs in Denmark.

The Social Liberal Party wants it to be easier to recruit highly qualified labour.

The party wants to restore a so-called green card scheme, and reduce the immigrant annual to obtain a residence and work permit from DKK 408,800 to DKK 325,000 a year.

This is one of the items which the Social Liberal Party wants fulfilled if it is to support a new Social Democrat-led government, it stated at the party’s summer meeting.

“After the next election, the Social Liberal Party will only support a new government that is independent of the Danish People’s Party’s (DF) policies,” the party chairman Morten Østergaard said.

The pay limit scheme
If you have been offered a job in Denmark with a high salary of at least DKK 417,793.60 a year.

The positive list
List of business sectors where there is a shortage of qualified labour in Denmark.

Fast-track scheme
To make it faster and easier for certified companies such as the University of Copenhagen to bring highly qualified, international employees with special qualifications to Denmark.

This was after figures from the Ministry of Employment showed that 70 per cent of highly skilled foreigners who had a green card were doing unskilled jobs in 2013.

“The companies that said they needed the staff, they have simply not used . We have therefore come to the conclusion that it was a mistake,” said Danish People’s Party spokesman on integration Martin Henriksen to Ritzau at the time.

The Social Liberal Party has not revealed how a new green card system is to be designed.

But in the former system an applicant had to achieve 100 points to get a green card.

A degree equivalent to a Danish bachelor’s degree gave 30 points, while a PhD gave 80 points.

There was also an emphasis on work experience, language skills, adaptability, and age in assessing the application.

“The problem is that this has turned into a byzantine system. It’s unnecessarily complicated to obtain work and residence permits. You need to submit several applications and if you happen to make a mistake, you have to start all over again,” the UCPH director Jesper Olesen said to Danish broadcaster DR in 2017.

He referred to the fact that UCPH had been reported to the police by the Agency for International Recruitment and Integration twice in one year. This was after researchers from countries outside the EU who were employed at other education institutions had been examiners without getting prior permission to work at the university.

In another case, the US professor Brooke Harrington from CBS got a DKK 13,500 fine for taking on work on the side when she presented to the Danish parliament’s Committee on Taxation.

A total of 13 foreign researchers have been reported to the police for taking on side jobs, before the rules were changed in June this year. Researchers can now take on extra jobs, without requiring a separate work permit.

This does not apply, however, to researchers employed on the pay limit scheme.

The Social Democrat chairman Mette Frederiksen has announced that the party will go to the elections on a minority government platform without its traditional ally, the Social Liberal Party, as the differences between the two parties on immigration policy are too great.

The introduction of a new green card scheme can therefore be expected to be unlikely, as the Social Democrats helped abolish the scheme in 2016.