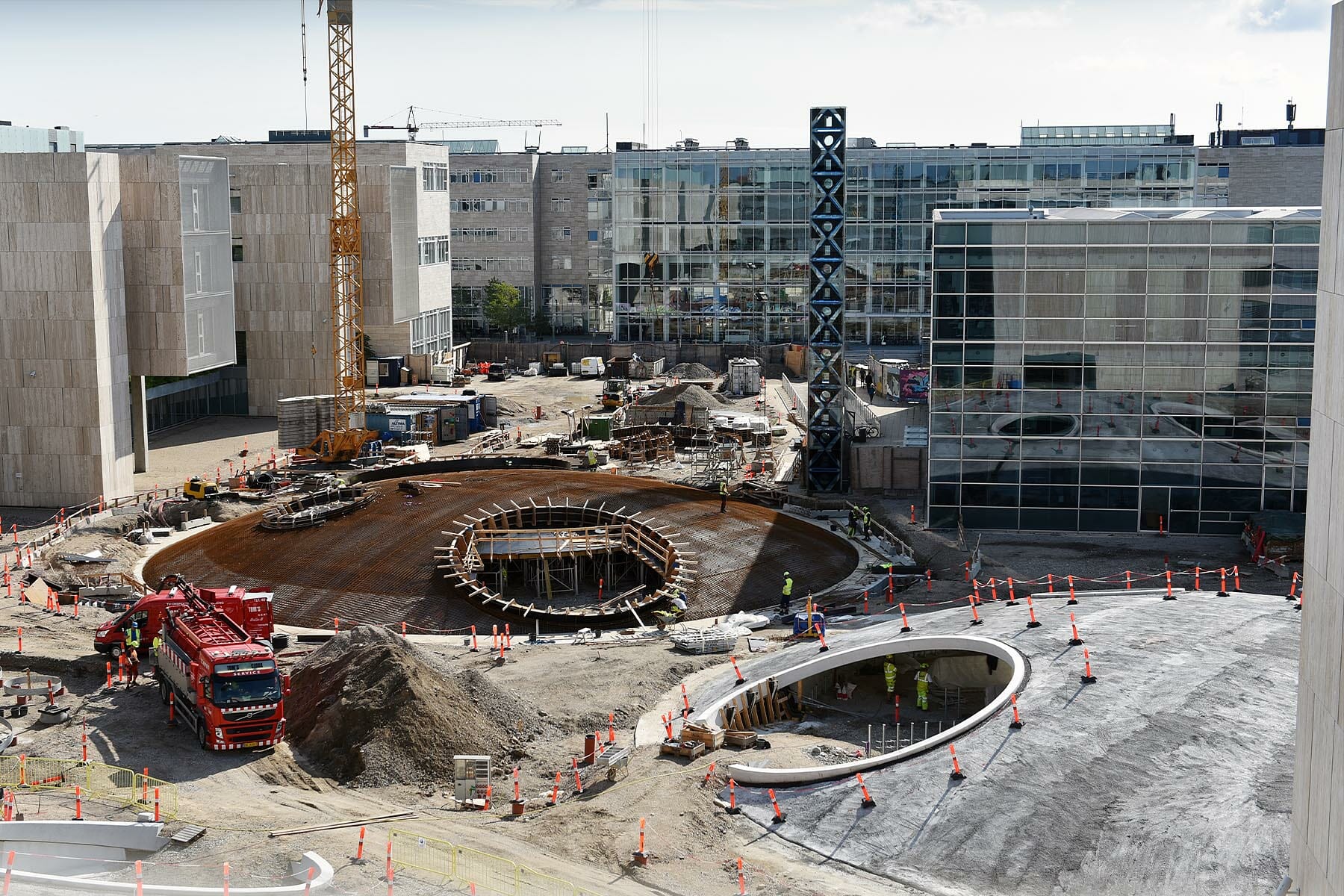 The north-eastern end of Karen Blixens Plads. KUA 1 is in the background. KUA 2 is on the left. The spherical hills are to be tiled and will serve as roofs for bike-parking areas (Photo: Anders Fjeldberg)
image: Anders Fjeldberg

Construction — It should have been finished in December, but Karen Blixens Plads at South Campus may not be ready until spring. But its Wi-Fi, covered bike parking and outdoor charging points, make it worth the wait, according to the university

More than 18 months have passed since the Law and Theology faculties, together with the School of Library and Information Science, moved into the KUA 3 complex at South Campus. But while their buildings were completely built when they moved in, others studying or working at the university’s Amager campus are still dealing with construction crews working to complete Karen Blixens Plads.

Eventually, the building site will become an L-shaped quad that will be bordered by Søndre Campus’s  and the Royal Library.

Originally, construction was to have been finished and the square handed over to the university on December 1. Now, though, it’s looking as if that will be delayed.

“We’re two months behind schedule, in part because we found some things we weren’t expecting when we started digging,” says Lasse Bang, of the Buildings and Property Agency, which is responsible for overseeing construction.

The unexpected finds include old foundations, pipes, wires and concrete chunks from previous construction projects at KUA that, instead of being hauled away, were used as fill – none of which was hinted at by the information the contractors were given.

The revised plan now calls for the contractor to be done on 31 January – if all goes according to plan. The last thing that crews will do is lay the concrete tiles and brick that will form the surface of the square. But the delay means the work will be carried out during the winter, making it susceptible to further delays. If the weather turns bad enough for long enough, it may be spring before they are done.

Kristian Boye Petersen, the director of the Faculty of Humanities, brushes aside the impact of any potential delay.

“Sure it would have been nice of the square had been finished on 1 December, and to have been able to put up a Christmas tree, but I’m sure we will find some other theme for the ribbon-cutting when it finally happens. The most important thing for us when we do the ribbon-cutting is that we have a completed square,” Petersen says.

One possible date for the ribbon-cutting, he suggests, is 14 April, Karen Blixen’s birthday.

COBE, an architecture firm, designed the square. Starting at the canal by KUA 1, the L-shaped space passes the Royal Library on one side and KUA 2 on the other. It then turns 90° continues past KUA 3 before ending at Amager Fælled.

One unavoidable feature of the new square are the three enormous spherical mounds that will serve as roofs for bike-parking areas with room for 2,100 bikes in total – and which have already earned the nicknames “Death Stars” and  . 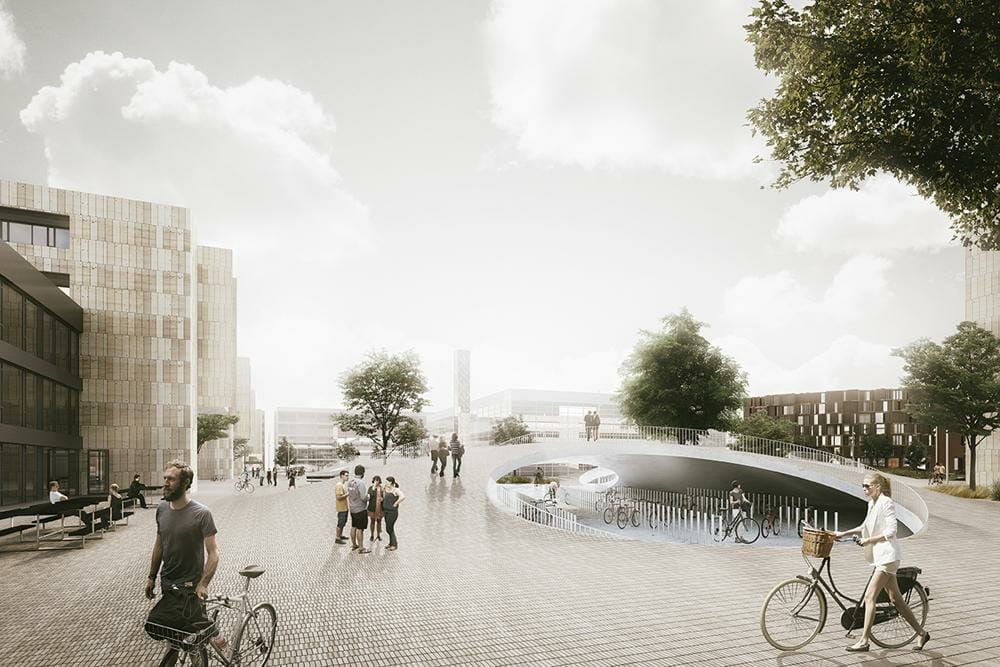 An artist’s conception of the northern end of the square, near Njalsgade, complete with Death Star (Photo: COBE)
image: COBE 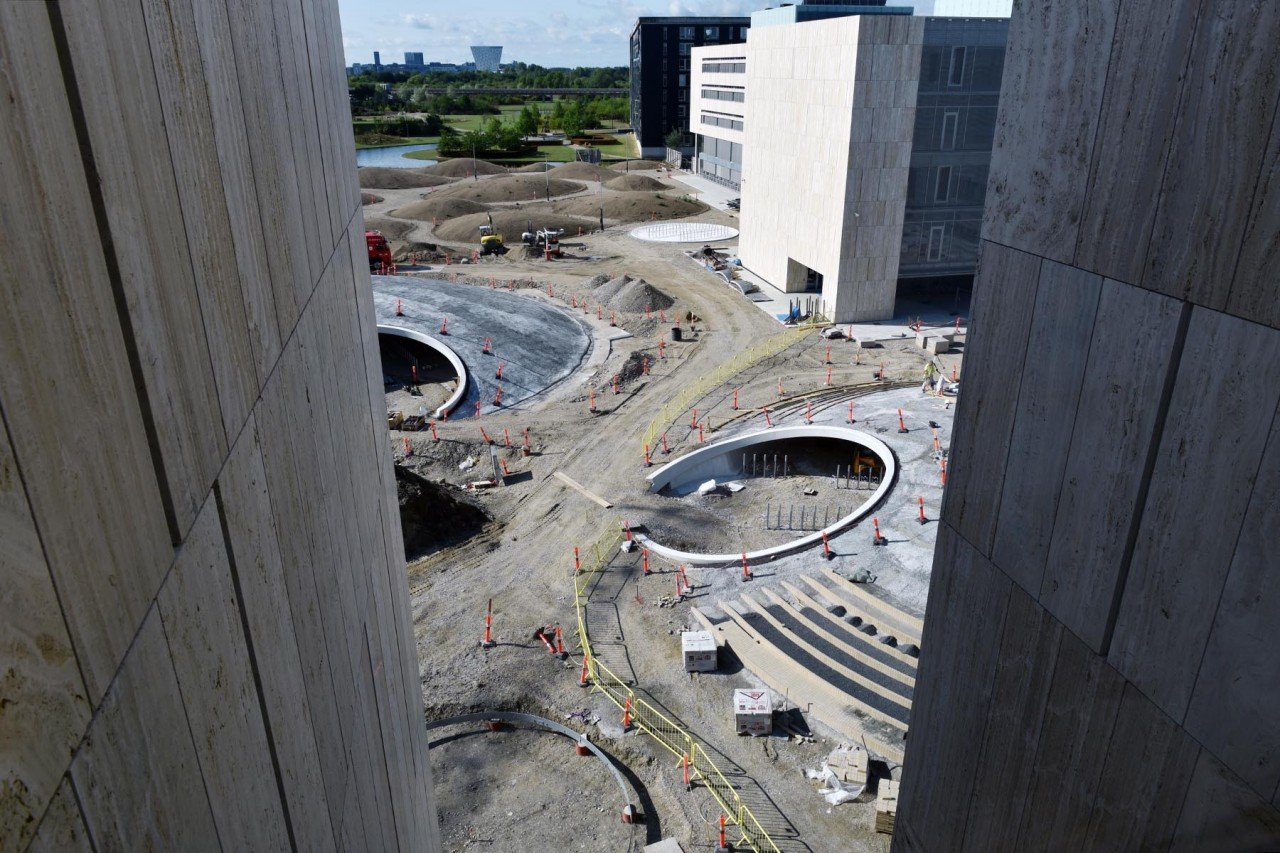 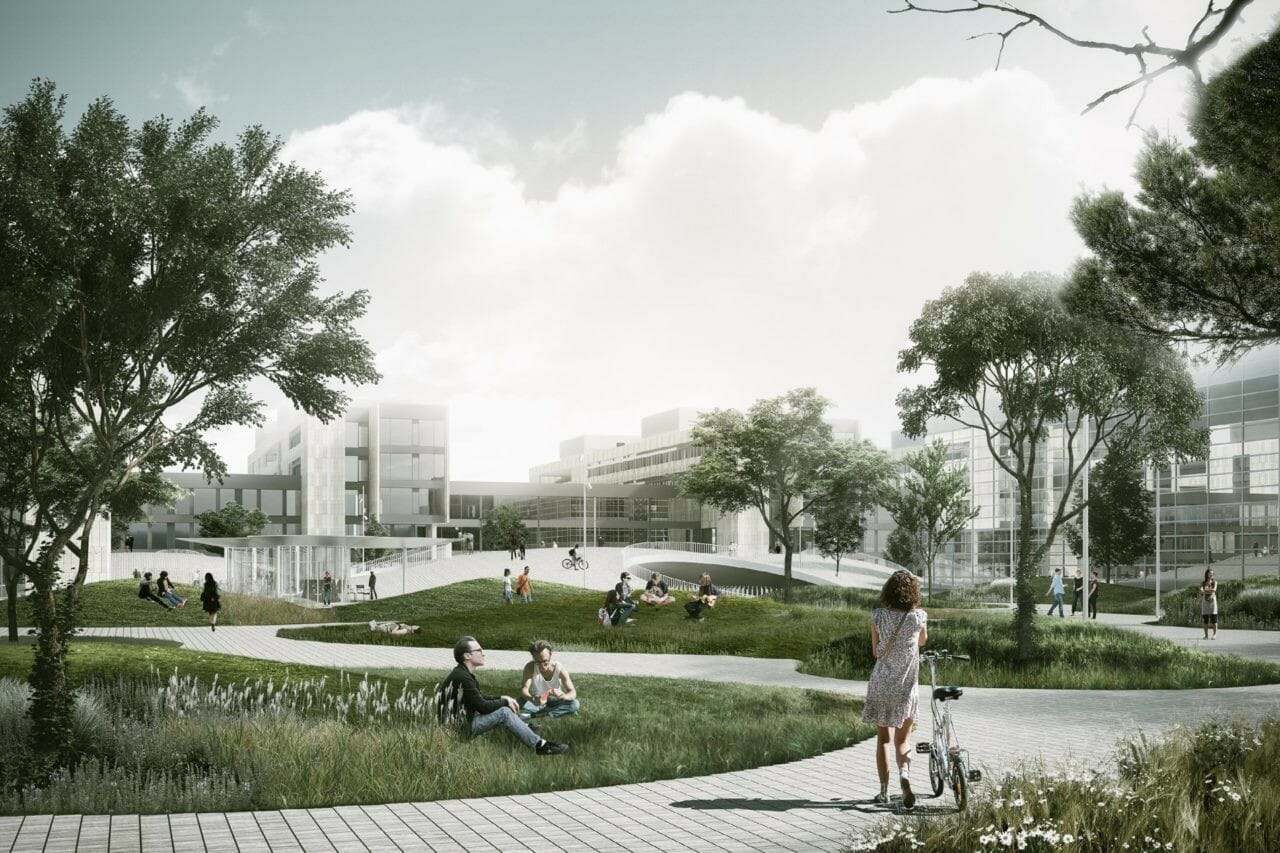 The southern end of the square – where it abuts the canal that marks the border to Amager Fælled – will incorporate more greenery than the rest of the square (Photo: COBE)
image: COBE

The mounds have steps up the side that the designers call an “informal auditorium”, which means that they can be used by students to relax on and that they can use used as seating for outdoor lectures and other events.

The steps are just one of the details the designers added to the square that Petersen thinks will result in it being used.

“Think the Spanish Steps in Rome during the summer,” he says. Other details he’s keen on include Wi-Fi coverage and outdoor charging points for people’s devices. In general, he thinks the square will add a dimension of mobility to the campus.

Kristian Boye Petersen, faculty director at the Faculty of Humanities

“It’s going to make the various faculties and the various forms of student life more integrated. It’s going to give students and faculty a place to meet each other informally. I can’t see how anyone that uses the square won’t appreciate it. If the neighbourhood’s residents also start using it, it could help create some of the life Ørestad Nord has lacked.”

Grand. Not so green

If there is one thing the square doesn’t lack, it is hard surfaces. There are plenty of paving stones – especially on the Njalsgade side – but there are few trees. And all of them are consigned to small, round planting beds.

“In my opinion, this is going to be a big, spectacular square. The downside of adding a lot of greenspace is that it needs to be tended. Besides, there’s a lot of grass and greenery at the Grønningen end (out towards Amager Fælled, ed),” Petersen says.

Once turned over to the school, the square, Petersen expects, is going to have a significant impact on life at South Campus.

“I’ve seen so many improvements in the buildings here. And I think you’ll find they feel the same way in the Law and the Theology faculties. There’s a lot more life here now, but once the square is finished we’re going to see even more.”