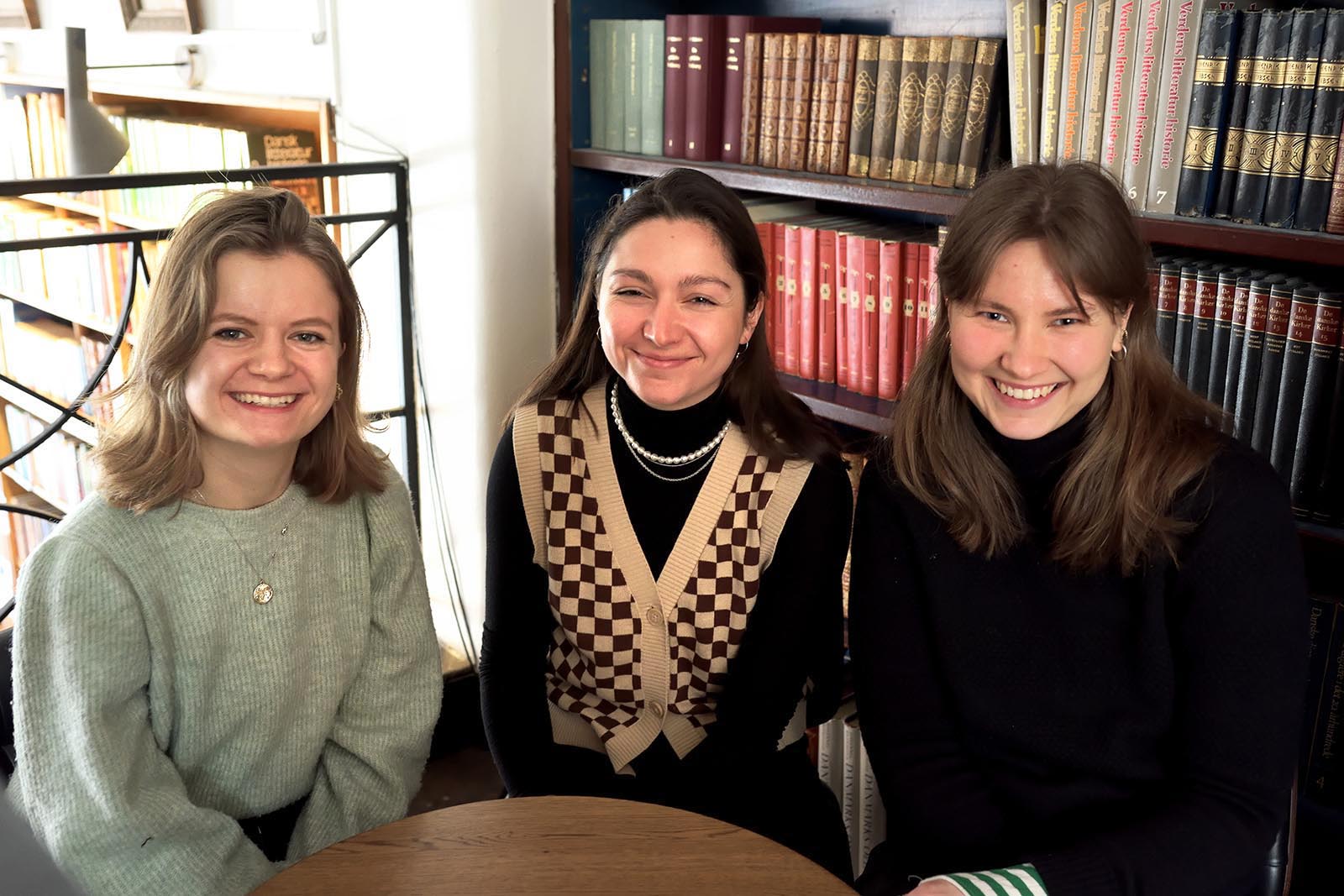 From the left: Fay Brasser, Cecilia Price and Astrid Bjerregaard. They are University of Copenhagen students, and have been involved in choosing and presenting a selection of films about how we can improve global health.

Global Health — Three students talk about their work with the film festival Global Health Film Days. They want to make more people aware of the world's health issues and set off a debate about them.

Global Health is the name of an area of research at the University of Copenhagen. It has also inspired the name of a film festival, Global Health Film Days, which shows films within nine global health themes and runs for 12 days from 25 April to 5 May.

The purpose is to show that the world’s health is not only about diseases and nutrition, but also about women’s sexuality, abortion rights, the health of indigenous people in the US, food security, the climate crisis and dementia.

»The film festival is to show global health questions surround us everywhere. This is a relatively new area, so there are probably issues within global health that others have never heard of before,« says Fay Brasser, a master’s student in Global Health at the University of Copenhagen (UCPH) who helped organised the festival.

Fay Brasser likes the fact that the film festival is a creative way of engaging with other people. She is one of three UCPH students which the University Post spoke to who has helped find and select the festival’s films and themes.

They hope that the films will make participants want to get involved in global health, even though some of the issues may seem heavy going.

Important to point to solutions

Astrid Bjerregaard is doing a bachelor’s degree in film and media studies. She explains why Global Health Film Days is important:

»It’s different from other film festivals, because we focus not only on the problems, but also on the solutions. And our goal is to get the audience engaged, so we know that when they leave the cinema, they will get involved in society,« says Astrid Bjerregaard.

She started work on the Global Health Film Days because she has an interest in societal issues.

All nine themes at the Global Health Film Days will be represented in Copenhagen. Find out more in the programme.

The Cinemateket in Copenhagen is doing ticket sales.

This is the second year of Global Health Film Days, and the University Post wrote about it last year also : »When you’ve seen this film, nothing is the same anymore«

You can read more about the study programme in global health at UCPH here.

»With the film festival, I have been given the opportunity to connect the creative film world with different societal problems,« says Astrid Bjerregaard.

About 15 students from UCPH have spent the last six months finding and selecting the films for the nine themes at the festival.

Each film represents an important issue in global health, and the students have focused on finding films that are likely to be new to a Danish audience.

Films great to set off debates

But global health is a very wide research area, says Cecilia Price, who is doing her master’s degree in global health. She is happy to have the opportunity to take a closer look at the selected themes.

»A film festival is a good way of delving into many of the research area’s issues within a short period of time, and film is a fantastic medium to shed light on issues unknown to the general public – and set off indignation,« says Cecilia Price.

Maybe the films can inspire a deeper commitment.

»My hope is that the films will give other people an understanding of some important issues, set off a debate and start some interesting conversations.«

The films’ duration are from five to 90 minutes, and each of the festival’s themes show 1-3 films.

All of the films have been seen by at least four students, who are also responsible for presenting the films to the audience.

»The fun part is finding the films, researching them, and seeing them. Then you have to decide whether you want to do a panel discussion after a film. If you choose to do this, you need to get some usually very busy people to commit their time and get involved. It’s a challenge, but it’s also fun,« says Fay Brasser.

She herself decided to organize a Q&A with the director of the film that she will present at the Global Health Film Days in order to foster as much debate as possible.

The film is called In Search… and is all about female genital mutilation. It recounts the story of a young woman who chooses to fight to get her genitals reconstructed by means of surgery.

Change can start with one person

Astrid Bjerregaard’s film choice was Gather. It is a portrait of a growing movement among indigenous peoples in North America who try to regain their cultural identity via food sovereignty.

»Food is also important for their culture, and even though it is now possible to get food transported from the other side of the planet, it can still be difficult for indigenous people to get hold of the foods they have always eaten,« says Astrid Bjerregaard.

The film is also about people in small societies and about their activism:

»One of the messages in the film is that change can begin with one person in a local community, and they are able to make a difference. The film follows a chef who opens a restaurant with local and original fare, to improve the general state of health of indigenous people,« says Astrid Bjerregaard.

A bit more creative this year

Cecilia Price has chosen to be in charge of the film Everything is Now, which is about dementia and the care that patients with dementia get – or sometimes do not get.

The film follows a family that is confronted with a family member who, after a long working life, cannot fulfil their dreams because of illness.

Cecilia Price has chosen to offer the audience a set of VR glasses after the film. With these on their heads, they can learn something about the types of therapy that can now improve the life of those that suffer from dementia.

»I hope it can help give the audience some hope. I also think that we students this year have chosen to be more creative in our way of presenting the films compared to last year,« says Cecilia Price, who for the second year running is involved in presenting the films at the Global Health Film Festival.