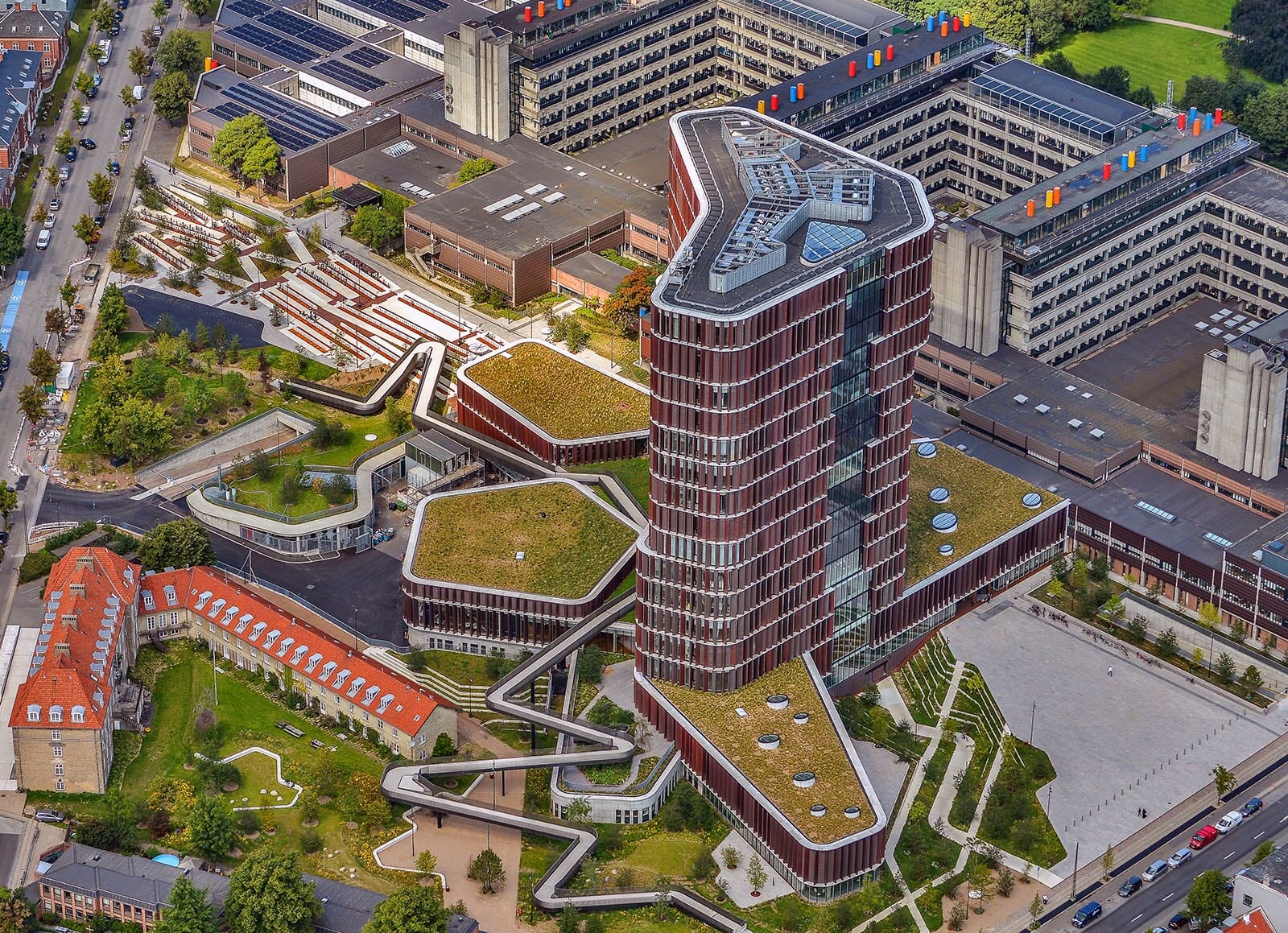 As a laboratory building, the Maersk Tower is a real drain of energy resources. But much has been done to implement green solutions and reduce energy consumption.
image: Grøn Campus/KU

Green innovation — The laboratories take up most of the space in the 15-storey Maersk Tower and turn it into a real energy drain. Yet through the course of its eight-year-long construction, it has succeeded in implementing many initiatives that save energy and resources

The Maersk Tower has been awarded prizes for its architecture. But it also has many remarkable features inside.

The building is, in principle, a giant laboratory packed with fume hoods – an advanced type of cooker hood for chemicals and experiments – and hundreds of researchers.

It was clear we had to see how we could cut energy consumption for ventilation, heating and cooling in the tower, says Project Manager for Energy & Sustainability Tomas Refslund Poulsen at UCPH. He has helped monitor the building’s green credentials right from the project’s planning stage in 2009.

Two of the six faculties of UCPH consume 88 per cent of the university’s total energy consumption, primarily because they have many workplaces in laboratories with fume cupboards.

UCPH had strict energy saving requirements for the construction of the Maersk Tower. This was so that it could contribute to the university’s own 2020 plan of cutting 50 per cent off the university’s total energy consumption, and 65 per cent of all CO2 emissions.

According to Tomas Refslund Poulsen, it is especially in the laboratories that you can save energy. It was important to be ambitious with the Maersk Tower, and to make sure that energy requirements were met.

Lars Ole Munch Nissen, the UCPH project manager on the Maersk Tower from Campus Service, says about the work on green innovation in the tower:

“The challenges have in particular consisted in the construction of the Maersk Tower being delayed, and in the financing. When the financing is tight, it is often the investments in green solutions that are cut back. We have nonetheless succeeded in upholding our original green ambition for the construction work,” says Lars Ole Munch Nissen.

This is remarkable, says Lars Ole Munch Nissen, because the Maersk Tower in comparison with a traditional office building is ‘ridiculously complex’. A raised bicycle path at the front of the Maersk Tower. The green innovation applies not only to financing and energy, but also plants and recreational areas. Image: Landscape architect company SLA
image: Landskabsarkitektfirmaet SLA

The building consists of kilometres of built-in ducts, pipes, cables with attached facilities to control heating, ventilation, cooling, gases and many other complex processes.

In addition, the waste from the tower is a big issue, and the Faculty of Health and Medical Sciences which is responsible for the daily operation of the building at UCPH, wanted to make sure that a large proportion of the total waste was sorted.

Recycles up to 85 per cent

Mærsk Tower has 15 floors, and 12 of them have laboratory activities.

This requires a lot of ventilation, and the tower’s total capacity to replace the air is 325,000 cubic meters an hour.

This corresponds to a 69 metre tall box of air. Every hour! 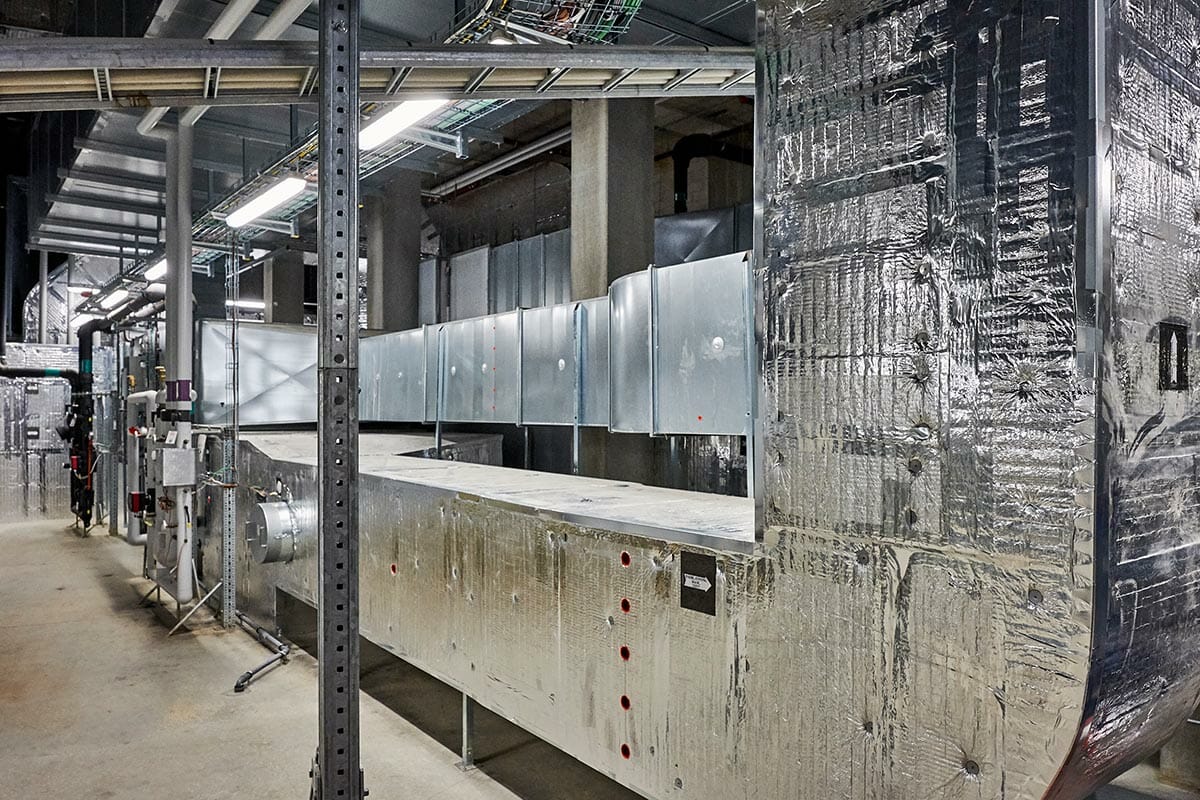 Part of a ventilation unit. Mærsk Tower consists of a total of 10 stations that take care of the necessary exchange of air in the tower.
image: Grøn Campus/KU 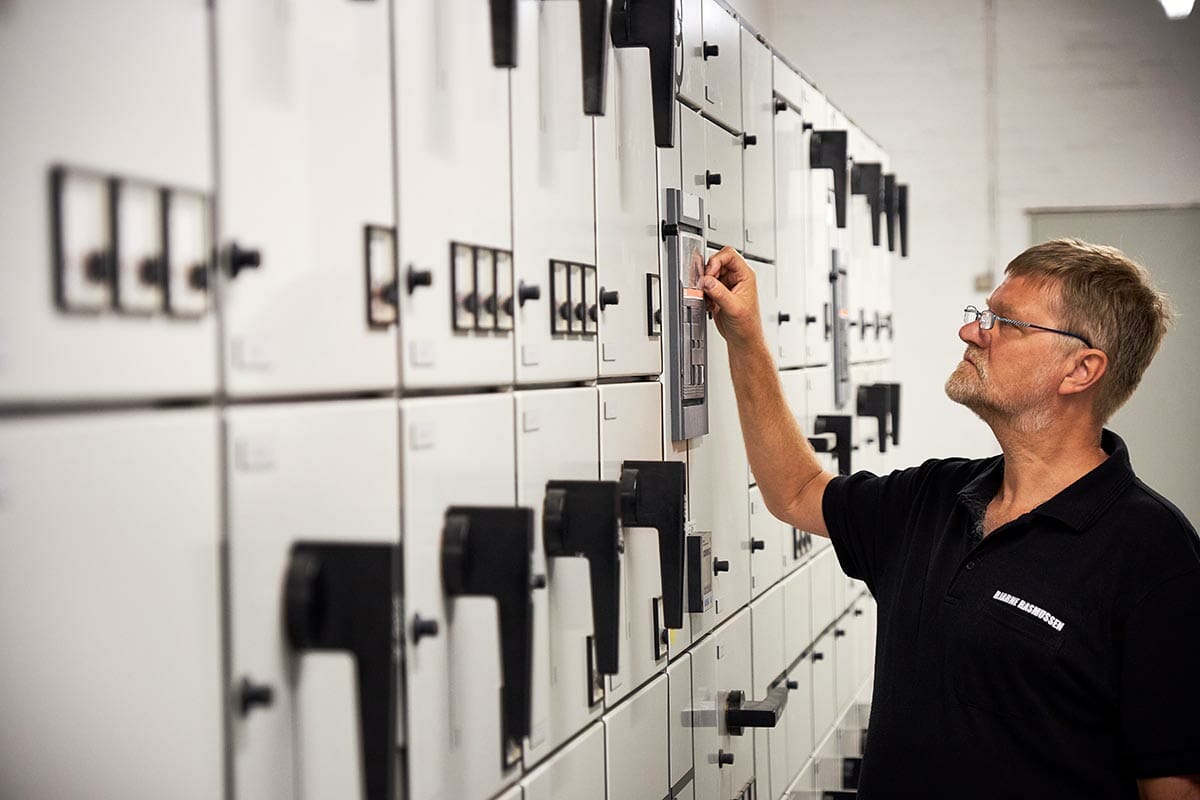 The air is heated by energy in the winter, but the tower uses a solution where the fresh air sucked in is heated by the warm, polluted air that is blown out of the building. This is done by means of large heat exchangers in the building.

In the summer, the air needs to be cooled down inside the building. There are copper shutters installed in front of all windows in the building. They can open and close with the sun and act as a sun screen, which reflects 75 per cent of the energy from the sun that hits the tower, but laboratories, computers, IT systems and other energy-consuming units produce so much heat that the tower needs a cooling system for a large part of the year.

For this, they use of a so-called remote cooling system, which means that cold water is pumped up in pipes from the bottom of the Øresund and deep into the Maersk Tower, where it helps to cool down the building and keep down energy consumption.

All the initiatives for sustainable and green solutions at Maersk Tower are described in a folder published by the Green Campus group at UCPH. It’s called Sustainability in the Mærsk Tower and is available as a PDF here (in Danish).

A selection of facts

40 per cent of the total energy consumption in the tower goes to heating up cold fresh air, that is constantly sucked in from the outside, warming up the many laboratories. They have a considerable ventilation need.

Lighting in the Mærsk Tower is exclusively from energy-saving LED bulbs.

The laboratory ventilation is subject to particular safety requirements, since the air that is is sucked out from the laboratories must not contaminate the fresh air that is drawn into the building.

1,500 square meters of solar cells have been installed in connection with the tower. However the Maersk Tower uses so much energy that they only contribute to a fraction of its annual, total energy consumption.

Rainwater is collected on, and in, the ground for toilet flushing inside the building, and for the watering of the landscapes in the campus park.

This can also be seen in the leaflet, where there are many other green features with plants around the building, grass on the roof, bike cellars, bike paths, facilities to absorb rain water etc.

Something for the local community too

Both Lars Ole Munch Nissen, and Tomas Refslund Poulsen are proud of what has come out of the many initiatives for green innovation.

“The Tower is also a contribution to the Nørrebro district. The green areas around the tower are open spaces, which used to be parking spaces, and it now possible to bike down through the tower basement and out on to the other side. The top of the tower, the 15th floor is open to all visitors, and the view from up there is fantastic,” says Lars Ole Munch Nissen.

The work on making UCPH greener is to continue. This goes for both the Maersk Tower’s energy consumption and for the other buildings and laboratories at UCPH. 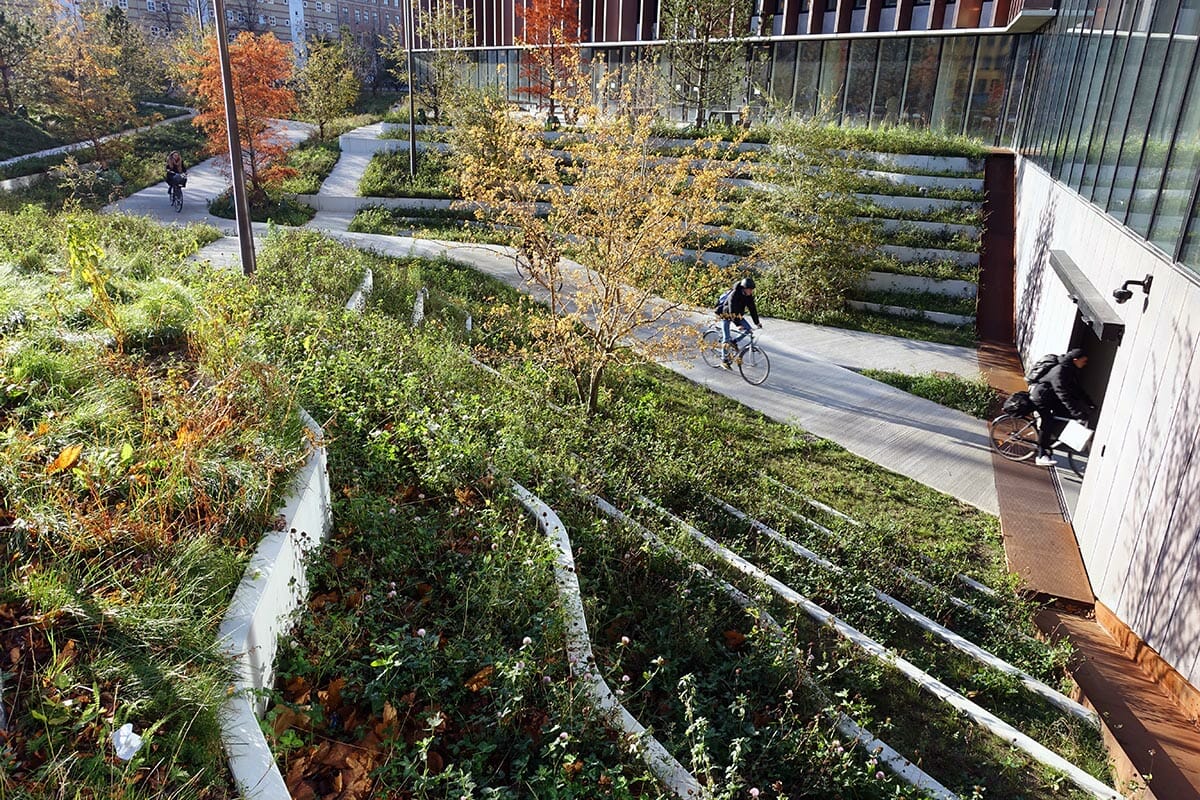 Cyclists can ride under the Maersk Tower.
image: Grøn Campus/KU 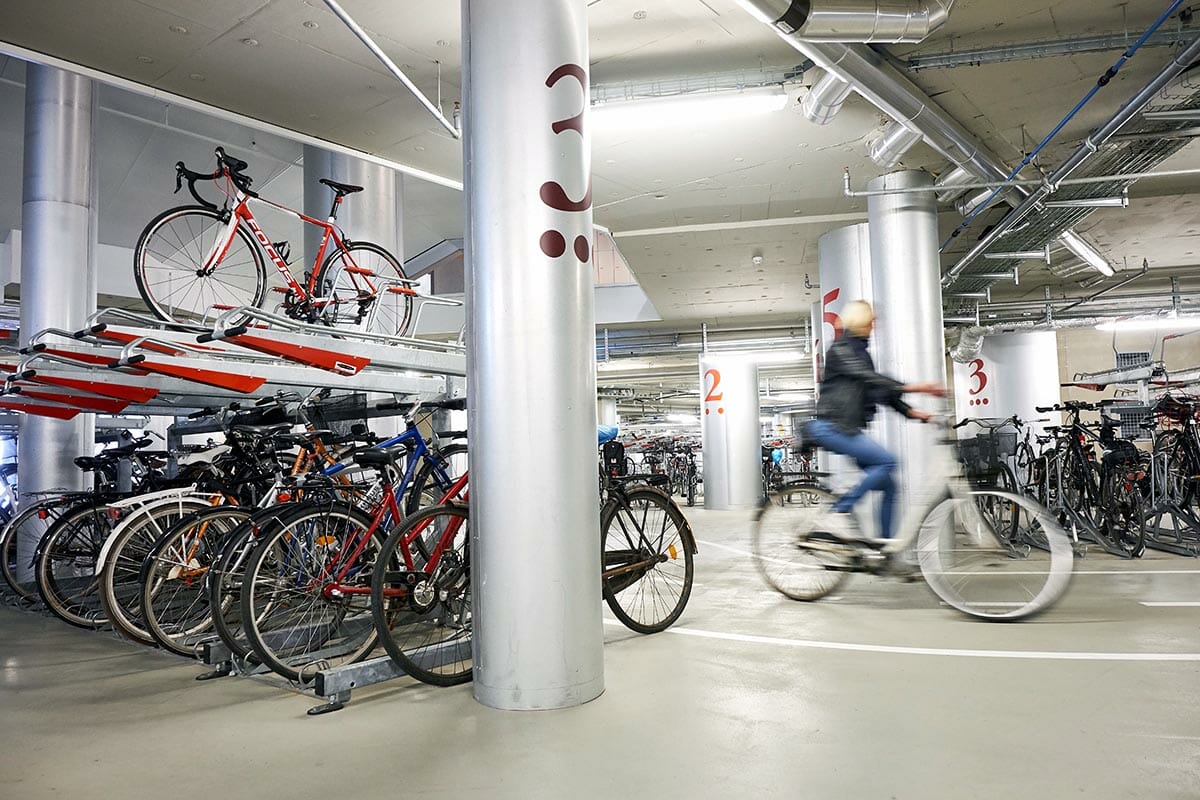 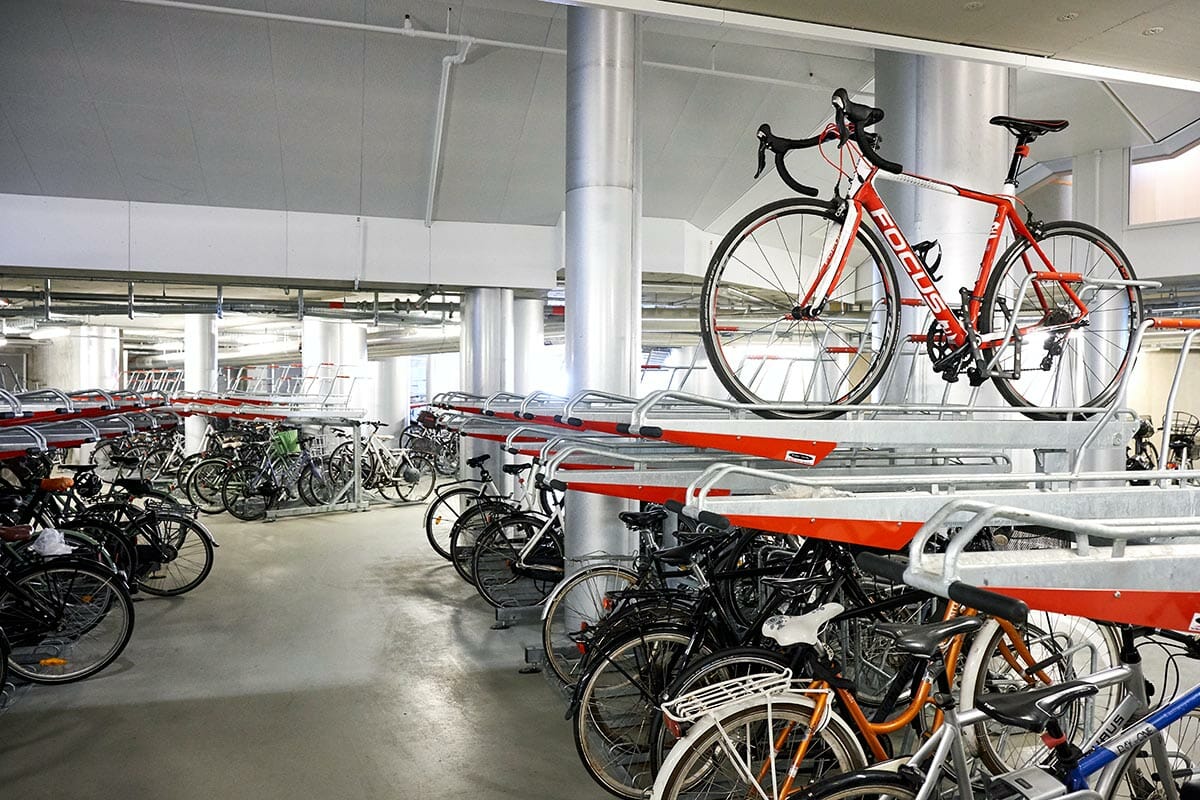 The bike cellar even has a workshop, which is at the employees’ disposal.
image: Grøn Campus/KU
Newsletter