The University of Copenhagen is to get an LGBT+ policy, the question is which 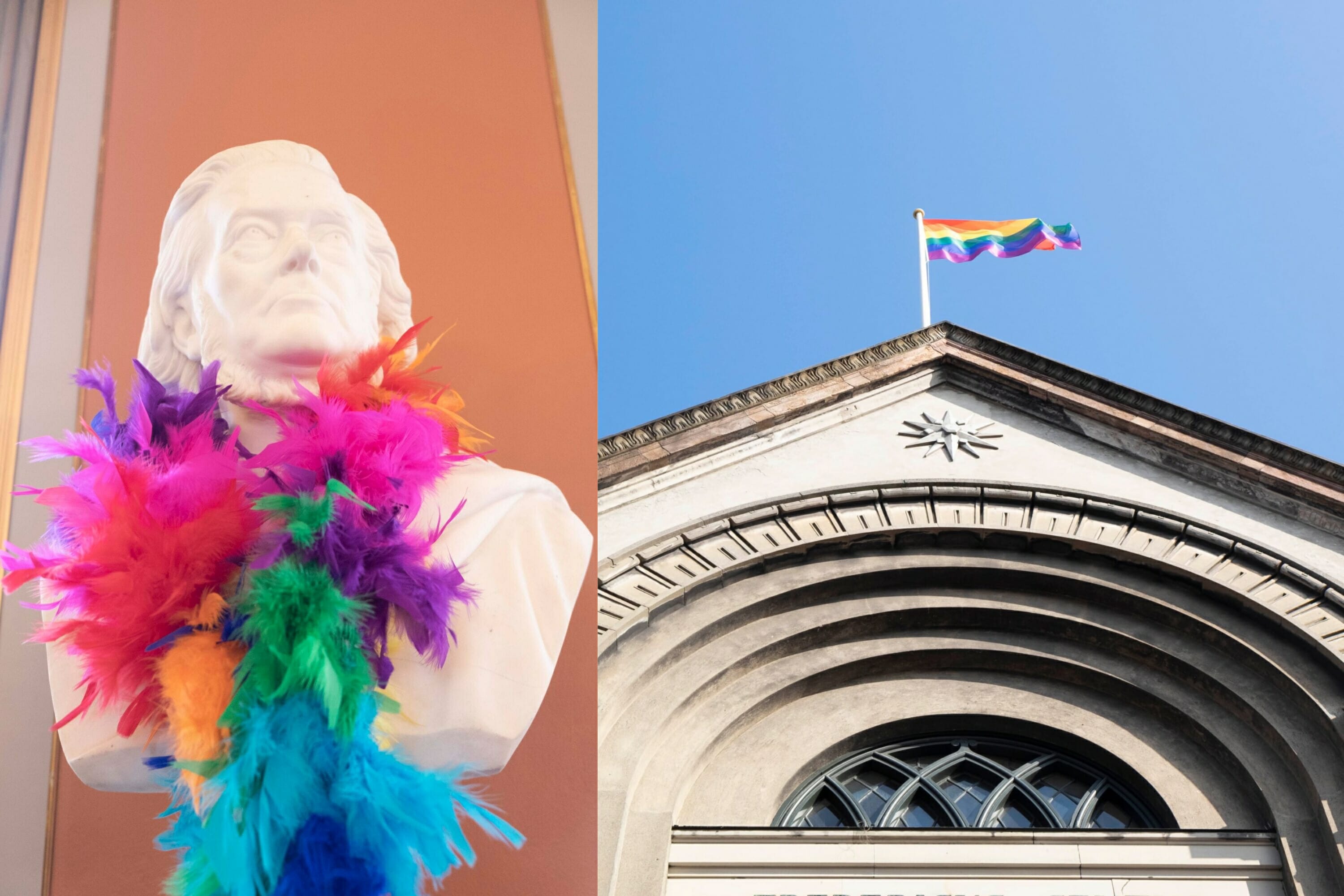 Pride — Over 700 people represented the University of Copenhagen at this year's Pride Parade, but the university does not yet have an LGBT+ policy. Something should be done about it, said Prorector Bente Stallknecht at a debate meeting with students and staff.

Dead white men keep an eye on us. The old Udvalgsværelse 3 room in the inner city campus is full of busts and oil paintings of the university’s greatest scientists. For this occasion, several of the busts have a rainbow-coloured feather boa around their necks. An okay attempt to make them appear a little  .  They are, nevertheless, in stark contrast to the motley flock of 60 students and staff who have appeared on a grey Tuesday to discuss the university’s LGBT+ policy, or the lack of it.

»The University of Copenhagen has a particular responsibility to ensure an inclusive and heterogeneous workplace. Unfortunately, we have not been particularly explicit about our policy on LGBT +, but we would like to change that now,« says Prorector Bente Stallknecht.

The panel consisted of:

That is why the university, together with the Student Council and the Studenterhuset, has organised this debate.

»It is important that we do not sit here in two years time and regret that the University of Copenhagen did not do anything proactively in the LGBTQI+ area,« says the university’s new diversity and equal treatment consultant Maria Mortensen.

A panel of seven participants is to discuss how the University of Copenhagen can be more inclusive.

»We have talked enough. Now it is time to act. And this requires more than a single debate meeting or a parade once a year,« says the chairman of the Student Council, Mike Gudbergsen. 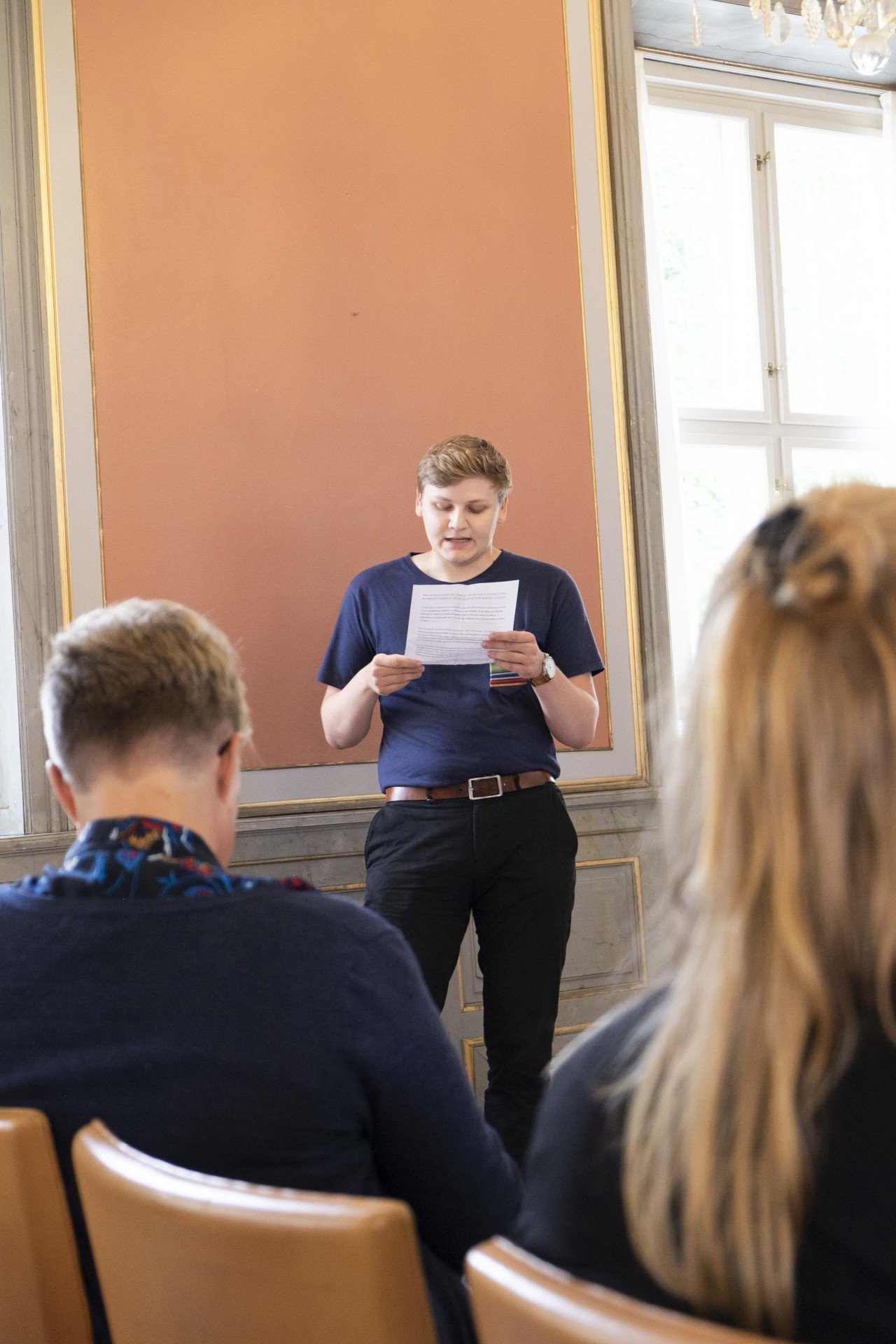 The chairman of the Student Council, Mike Gudbergsen, starts the debate meeting by saying: »We have talked enough. Now it is time to act. And this requires more than a single debate meeting or a parade once a year«
image: Drude Morthorst Rasmussen

Maria Mortensen is the new diversity and equal treatment consultant at the University of Copenhagen. She is one of the initiators of the debate meeting.
image: Drude Morthorst Rasmussen

This is the starting point for a one and a half-hour long debate. A debate that is not about whether the university should do something in the LGBT+ area, but about what it can do in practice.

Half of the time is allotted to discussing the challenges that LGBT+ people encounter at the university. The microphone is passed around between the panellists, who are from universities, organisations and the private sector. They all work with gender and sexuality in their daily lives.

Director of KVINFO Henriette Laursen says that institutions like the University of Copenhagen have to be proactive: »In Denmark we have an idea that we are automatically free and inclusive. This is a big part of the challenge.«

She proposes that the university should get better at supporting research in LGBT+, doing questionnaires among students and staff, and, not least, remembering to be norm-critical in, say, recruitment and teaching.

Lack of well-being and microaggressions

An electronic rainbow flag flutters over the panel participants and casts a bluish light over the audience. The power point presentation says that you can send questions to the debate via a ‘safeline’. The audience has been able to register anonymously, and they have also the opportunity to ask anonymous questions.

It bears witness to the fact that it is still not easy to come out of the closet as a LGBT+ person. Not at the university either, where most people are highly educated, according to Henriette Laursen:

»It’s important to say that this is about well-being. There is no doubt that many LGBT+ people do not thrive in the workplace like their colleagues,« says the director of KVINFO.

The concept of ‘microaggressions’ turns up several times in the course of the debate as a major challenge for LGBT+ people. A microaggression is a commentary or action that expresses a biased attitude to a marginalised group in a discreet and often unconscious manner.

»Microaggressions are like acid rain on a statue. It is not possible to see it on a daily basis, but over time, it is very damaging for LGBT+ people to be constantly subjected to non-inclusive behaviour. This requires a strong antidote from the top of the organisation,« says panel participant Marianne Egelund Siig, who works as a strategic management consultant and has previously been a ‘Head of Diversity’ at the bank Nordea.

Rainbow flags on all campuses

Sandi Rizvic can recognise the smaller, prejudiced comments from his daily life at university. As the only student on the panel, he can give examples of behaviour that makes students feel unsafe at a place like the University of Copenhagen. The university must prevent this, he argues:

»The most important thing is that universities need to be protected spaces for the students, so they feel safe and welcome. And we need to make sure that we are proactive,« says Sandi Rizvic, who is also a member of the executive committee of the National Union of Danish Students DSF.

The second half of the debate is about solutions. Here, the audience offered suggestions for making the university more inclusive. An employee proposes that the University of Copenhagen should raise the rainbow flag on all campuses. Right now it is only on the central administration’s buildings in the inner city.

Sandi Rizvic has also plenty of specific suggestions for where the university should start in formulating a LGBT+ policy:

»The universities could introduce gender-neutral toilets on all campuses, educate lecturers and staff in LGBT+ questions, and be more critical of the syllabus and curricula, so that we also meet more diversity in the actual programmes of study.«

For student Sandi Rizvic, it is important that students are able to feel safe at the university. This is something that the University of Copenhagen has to actively take care of, he reckons.
image: Drude Morthorst Rasmussen 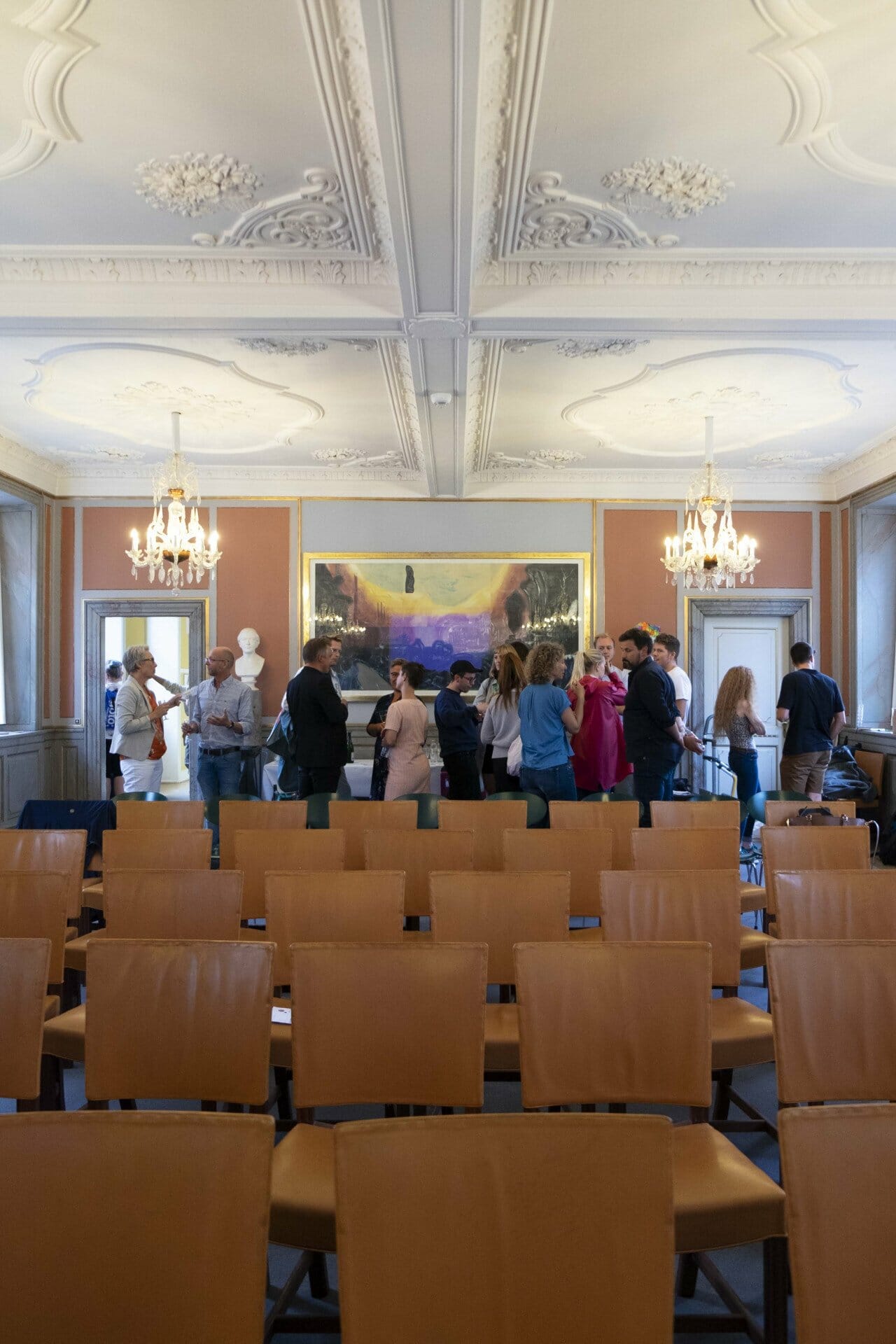 After the debate meeting, the university offered a glass of champagne, while the participants watched the rainbow flag being hoisted over the old buildings in the inner city. An employee proposes that the symbolic flag should also be hoisted across the university's many campuses in Copenhagen
image: Drude Morthorst Rasmussen

After the debate, the university offered a glass of champagne, while the rainbow flag was hoisted up over the old Kommunitets-building. Here is where I talk to associate professor at the Department of Biology, Jes Søe Pedersen. As a staff representative, he has been involved in an offence case at the Department of Biology, where a student criticised the use of biological gender in the teaching. He says that he is not in any doubt that the University of Copenhagen needs a LGBT+ policy:

»An institution like the University of Copenhagen must have a general policy on LGBT+. The question is how to implement the policy so that it also reaches the individual students out at the faculties,« says Jes Søe Pedersen.

At the Department of Biology, they have tried to introduce a course on gender in the Science Theory subject, according to Jes Søe Pedersen. He proposes introducing compulsory instruction on gender to the rest of the University of Copenhagen in the same way.

»As a teacher in the field of biology, I think it is very important for the students to understand that gender has many different academic angles. And that the biological one is only one of them,« the associate professor says.

There is still a little way to go before the University of Copenhagen can come up with major specific initiatives in this area, according to Maria Mortensen, diversity and equal treatment consultant. For the time being, the university has set up a forum on the joint intranet Kunet for LGBT+ staff, and this, with the debate meeting and other initiatives, is to lead to a larger piece of work on the university’s LGBT+ policies:

»We have received lots of good ideas today, which we will continue to work with. But it will be a longer process,« says Maria Mortensen.