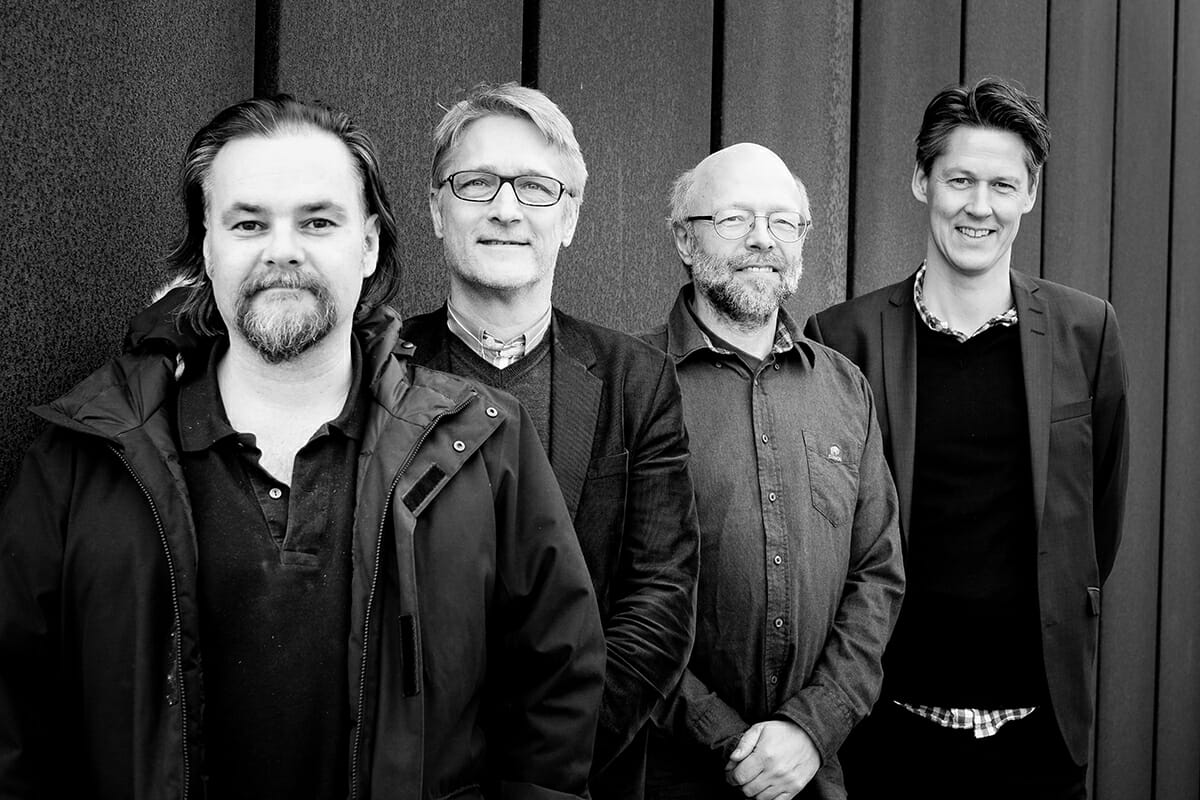 The Chairmanship of the Economic Council proposes turning the Danish SU student grant into a loan for master’s students. Chairman Michael Svarer is on the right.
image: De Økonomiske Råd

SU — The chairmanship of the Danish Economic Council, the so-called economic wisemen, are not against the Danish SU student grant system. But Denmark gives too much of it away, they write in a new report. A more fair system would turn part of the SU grant into a loan, they say.

The free Danish SU student grant has come under renewed attack in a report on the Danish economy for the spring 2018, which appeared on 29th May. The authors of the report is , which in Denmark is colloquially named the economic ‘wisemen’.

The wisemen propose, in short, that the SU grants for master’s students, in the future, be turned into loans. The proposal is a lot like a proposal from the Liberal Party in 2016 that it did not have the luck or energy to implement. The difference is that the Liberal Party would reduce the grant to all students, while the wisemen only want to change the terms for students doing their master’s. Previously both the OECD and the Danish Council of the Labour Movement AE have also argued for turning part of the SU into loans.

The new, or revived, proposal to cut the SU has been met with immediate and massive criticism from both student organisations, the University of Copenhagen (UCPH) student council and the main academic trade unions (according to Ritzau). The politicians do not seem to be

Minister says the proposal is interesting

New Minister for Higher Education Tommy Ahlers (Liberal Party) does not take a position on it, but according to the Børsen newspaper, he calls it ‘interesting’, while education spokesman for the governing Liberal Alliance party Henrik Dahl has stated in advance that the SU will not be touched before the next election. (In an email to the Univeresity Post he writes that this “does not have anything specific to do with the SU grant. It is because parliament does not have much decision-making power so close to a general election.”)

In the media Føljeton, the editor Lars Trier Mogensen writes that there are no votes in cutting the SU grant, and that this will be protected because the middle class 68’ generation – the grandparents of current students – will ”not accept cuts that target young people.”

But the SU debate returns at regular intervals, and the wisemen report will also be there after the next election. The fact is that Denmark differs from Norway and Sweden (and as far as we know, all other countries) by the fact that the student grant – that is, the part of the SU grant that you can get free of charge without having to pay back – is much higher here. This is sometimes taken up as a problem by politicians who claim that too many students from other EU/EEA countries travel here to get a free education, SU grant, and SU loans which can then be hard to recover.

The SU grant rates have increased by a factor of 2.5 in real terms since the mid-1970s, and the annual DKK 20 billion a year cost makes up a large part of the total government investment in education. The subsidies to university education programmes, for example, cost about the same as what university students in total get in SU student grants. 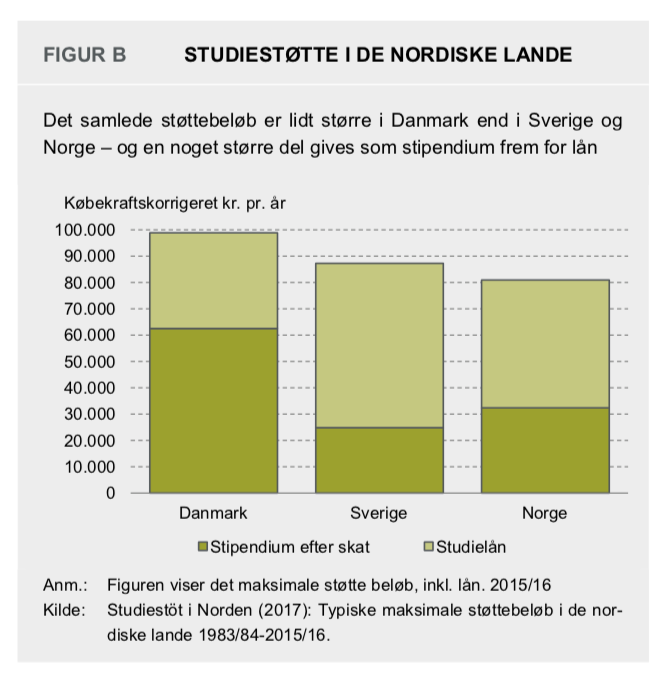 The figure from the Economic Council's report shows that Danish students can get a larger amount than their Norwegian and Swedish fellow students, and that a larger chunk of the aid does not have to be paid back.
image: De Økonomiske Råd

The new wisemen report concludes that grants for young people in education are generally a good idea.

Highly educated people subsequently earn a lot and pay a lot of money back in taxes that benefit society. But the tax on the work you get after graduating is a problem.

Chairman of the Economic Council and professor of economics at Aarhus University Michael Svarer puts it like this:

“Economists like us always think in terms of incentives. We think that people are rational, and that they think about what they get out of it when they make choices. So the calculation says that if you, for example, study economics, like I do, then you get to earn a high salary, and then you also have to pay a higher tax rate than you would do if you had not gone to university. The higher tax rate paid because you have a higher education reduces the incentive to follow an education programme that leads to a high salary.“

“But we want people to educate themselves, so to eliminate this distortion of incentives, we support education,” says Svarer.

The problem with the current SU grant is just that, according to the wisemen, the level of support is currently higher than it needs to be. This is the so-called tax neutrality argument to turn the SU grant into a loan in Denmark.

“In principle, I should have the support that exactly corresponds to the higher tax that I pay when I have graduated. If I get this, then the tax system does not affect my decision to enrol in a higher education programme. Then there is tax neutrality,” Michael Svarer says.

The chairman emphasises that this is a crude calculation and that it contains uncertainties. But it gives an indication of how much the support to people in education should be if there is to be tax neutrality. And, according to the wisemen, the grants are considerably higher than the level that would give tax neutrality.

According to the report, education is subsidized at 61 per cent, but a tax neutral level for a person who pays the top tax bracket throughout life is only 47 per cent – and only about 30 per cent for those who are not in the top tax bracket. (To see how the subsidisation is calculated, you can see the calculation in the report on page 124.)

“From a tax neutrality argument, we are oversubsidizing education,” says Michael Svarer. “But there may be other good reasons to support education. Education counteracts crime, highly educated people cost less in terms of health care etc. If I have a higher education, it will also improve my colleagues because I can share knowledge with them. These are the so-called external effects of education, but the literature that we have used does not point to large effects from this.”

Argument 2: The SU student grant redistributes wealth from the poor to the rich

However, the main arguments for changing the SU student grant are not tax neutrality, says Michael Svarer. There are at least two better arguments.

“If you look at SU for master’s students, it helps to increase economic inequality,” he says.

“It helpings to increase inequality in society if you pay SU grants to people like me on my master’s degree. Usually we want grants to reduce inequality, but here you have something that actually creates inequality. It is an argument that we are using taxpayer kroner to create more inequality when we actually want less.”

The fact that SU to master’s students leads to increased inequality is based on a calculation of averages, says Michael Svarer.

It may well be that there are some people who would not take a master’s degree if there was no opportunity to get a high SU grant, and these are perhaps precisely the people on the lower end of the socio-economic ladder. If you come from a home where you are not accustomed to higher education, and your parents do not have as much money to fall back on if you fail, then there could be a micro impact on inequality, where someone, who otherwise has the skills, deselects an education programme.“

So you would have to help these people in other ways?

“Yes, exactly. If you go down this road, you also have to think about how you can organise the system so that people who have to quit their education programmes or who do not have the opportunity to pay afterwards, have conditions that will not make it unbalanced, says Michael Svarer.

Argument 3: Changing grants to loans will not change admissions numbers

“Another argument is to look at what happens if we change the SU student grant and approach the Norwegian and Swedish situation. Will it have a significant influence on how many people start and complete an education in Denmark? The literature that we have been able to find does not indicate this,” says Michael Svarer.

According to the report from the wisemen, a reduction of SU by 10 per cent combined with a corresponding increase in the amount that students can borrow, would only “reduce the proportion starting on a higher education programme by 0.2 percentage points, while the proportion completing a higher education is expected to be reduced by 0.3 percentage points.”

From the point of view of government, the debate on education is often about getting young people to go for the return on investment. The Productivity Commission, for example, suggested in 2014 that society should take steps to get students to

“Our proposal goes a little in this direction,” says Michael Svarer. “If you turn the grants into loans, like we are proposing, and people are able to pay back the loan, it can have the consequence that students think a little more about what education programme it is that they are about to embark upon, and to a greater extent take what leads to a high probability of employment and a decent salary.”

What would happen if you took all the money from the SU student grant and instead increased the amount of support to education institutions?

“We have not taken a position on how you should spend the money, and what would happen if you, say, freed up one billion kroner from the student grants and spent it on the education system. One thing is clear, however, and that is that you would still oversubsidize compared to the level of tax neutrality.”