UCPH has an exceptionally high number of prayer rooms 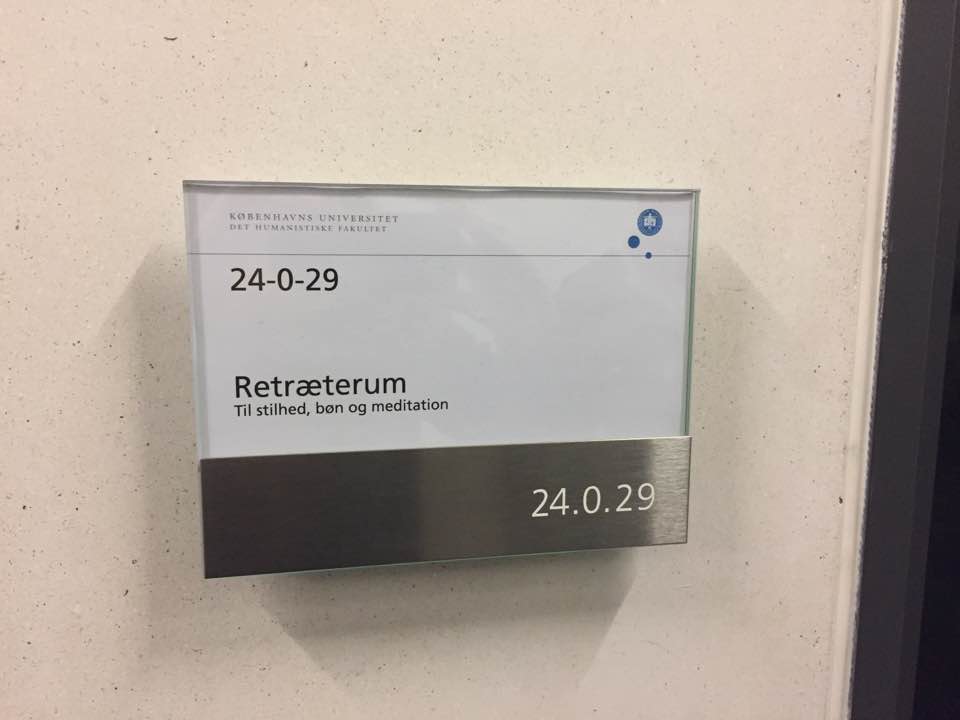 Prayer rooms — The Danish parliament can now take stock of the nation’s prayer room situation. Universities differ from other education institutions in that almost all of them have rooms you can pray and meditate in. The University of Copenhagen in particular has quite a few.

10 out of 37 higher education institutions have prayer rooms

The tally is actually research in honour of the politicians who this year will be voting on a resolution by the Danish People’s Party to ban prayer rooms at educational institutions in Denmark.

Facts: 10 out of 37 higher education institutions have prayer rooms. But they are largely concentrated on universities.

While, for example, maritime colleges have no prayer rooms, there are prayer rooms in six of eight Danish universities, with one of the universities (Roskilde) having until recently two rooms, one of which was closed due to cuts.

The tally shows that only universities are well-equipped with prayer rooms, in this way drawing a slightly different picture than what the media portrayed as a widespread presence of prayer rooms in the many educational institutions belonging to the Ministry of Education like primary and secondary schools.

Only 27 out of 1,774 of the education ministry’s institutions had prayer rooms. And of those that did have them, according to the education institutions, the users were mostly Christians, not Muslims, such as members of the Danish People’s Party, and an advocate for the abolition of prayer rooms Marie Krarup has claimed.

The fact that there are prayer rooms in most universities does not mean that they support students’ and employees’ religious activities alot. Several of them write in their reply to the Ministry that they are secular institutions, and no university actually uses the term ‘prayer room’.

The users are, according to the education sites themselves, mostly Christians, not Muslims.

UCPH is exceptional by having a total of seven retreat or silence rooms. The other universities typically have only one.

Roskilde University (RUC) previously had two ‘devotion rooms’ which were closed ‘in conjunction with the university’s space optimization.’ However, the student priest still has a room at RUC.

At SDU, the reflection room is devoid of religious decorations. »There must be chairs and nothing else in the room,« writes SDU. But at SDU there is also room for a student chaplain.

DTU writes in its reply to the ministry that »DTU does not make prayer rooms available to students, as DTU defines itself as a secular university«. But secular or not, DTU still has a student chaplain.

The student priest initiative at UCPH

Student priests (Christians) supervise the rooms in several places, and this is not coincidental. At the University of Copenhagen a modestly controversial retreat room on South Campus was established after an application by a multi-faith group under the local student chaplain.

According to the criticism by the Danish People’s Party the prayer rooms, or whatever we choose to call them, are in practice used by Muslims, but the historical background of the interior design of these premises is actually multi-faith, according to the research on the subject:

Rather than being the room for ​​one religion, the premises can be seen as expressions of religious groups’ opposition to secularization and an attempt to define a multi-faith public practice that can function in modern society without arousing indignation.

Read the University Post’s background article on the prayer room research: Retreat rooms are not Islamic – they are made for something called multi-faith

The IT University of Copenhagen (ITU) has no room for prayer or other religious activity.