US student just wants to study in Denmark: »I really did not expect that it would be such a hassle« 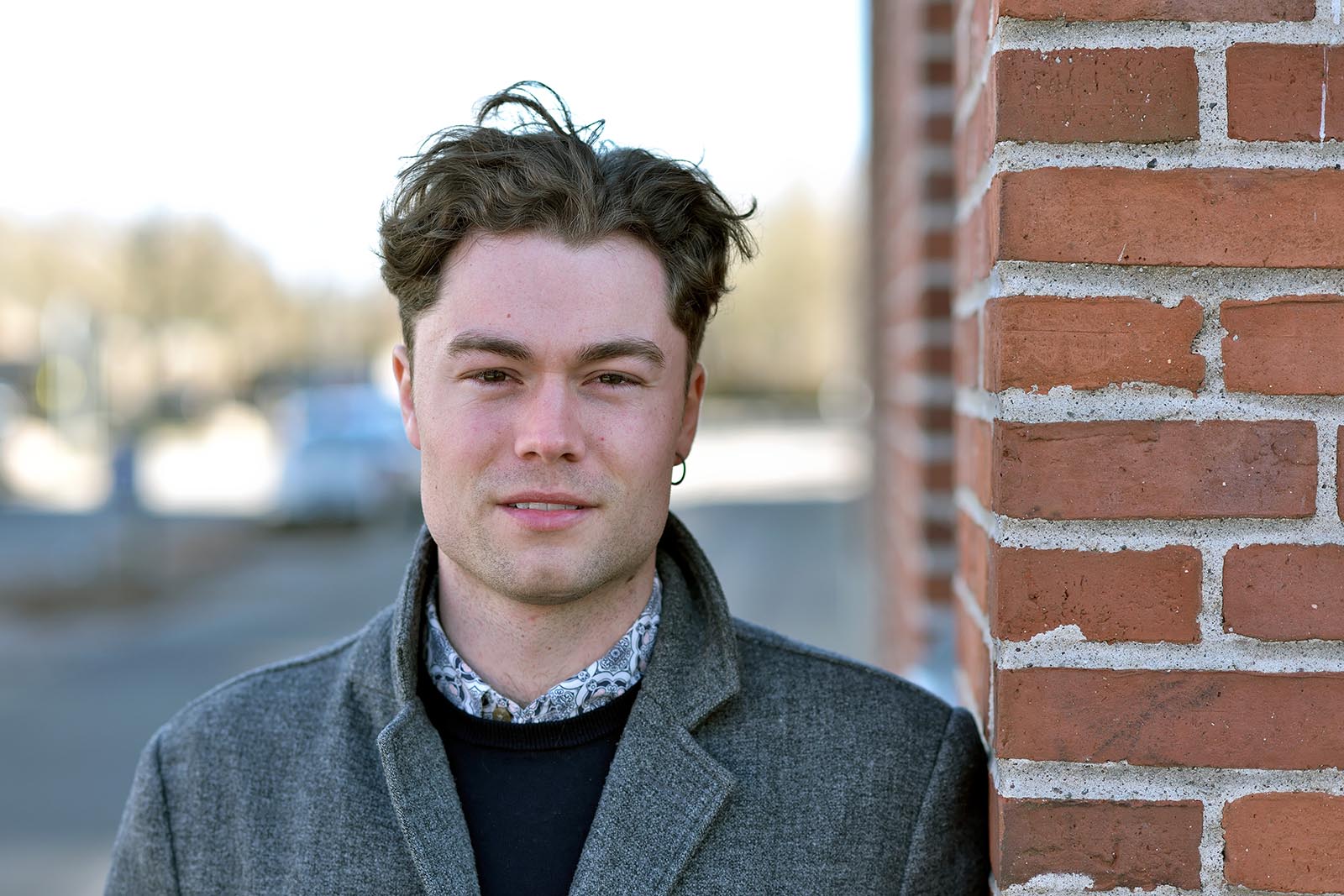 Christian Pedersen's father is Danish and his mother is American. He wants to study and start his adult life in Denmark.
image: Anders Fjeldberg / Uniavisen

Christian Pedersen is American. But he has a Danish father, speaks Danish and has a rather Danish-sounding name. This has turned out to be more a hindrance than a help in his encounters with the Danish immigration system. For the fourth year in a row, he is struggling to get a student visa.

The University Post recently described how a Chinese student was sent back to China because she was unable to renew her residence permit in time.

The story of Bingzhi Zhu’s repatriation is the tale of a system that greets foreign students’ with inflexible rules and non-negotiable deadlines. And she is not the only student who has become embroiled in Danish bureaucracy.

Christian Pedersen, who studies musicology at the University of Copenhagen, has a similar story.

»I have experienced something similar to this,« he wrote to the University Post after reading the article about Bingzhi Zhu.

For the fourth year in a row, the Danish-American student is struggling to get a student visa in Denmark. This has forced him to interrupt one study programme and start over with another, cost him a large amount in tuition fees and left him feeling stressed and uncertain about the future.

»My plan was to do my education here and establish a life in Denmark. But I really did not expect that it would be such a mess,« he says.

Christian Pedersen’s father is Danish, and his mother is American. When he was four years old, the family moved to the United States, but at the age of 18, he decided to return to his homeland and attend a [Danish residential, ed.] folk high school for a year.

His stay at the folk high school made him want to continue his studies at the University of Copenhagen.

After spending a year studying for the necessary science qualifications in the United States, he applied for a bachelor’s programme in natural resources at the University of Copenhagen. And he was accepted.

But something went wrong in Christian Pedersen’s dialogue with the university. He says that he approached the student counsellor just after he found out that his application had been accepted. But he was not told until October that he had to take the first steps in the residence permit application process, and that the university would only be able to fill in their part of the application afterwards, he says. He filled out the application and thought that everything was in order.

»I was so happy because it looked like it was going to work out. I wrote to the University of Copenhagen to remind them to start the process of applying for a residence permit for me, and I was just looking forward to starting the programme,« he says.

Unlike Chinese Bingzhi Zhu, Christian Pedersen has a Danish-sounding name. When he speaks Danish, there is no indication that he grew up abroad, and his appearance does not stand out.

But none of this benefited him. Quite the contrary.

A few days after Christian Pedersen arrived to start his first classes, he received an email from the Education and Students unit at the University of Copenhagen.

In the email, which the University Post has seen, the Education and Students unit apologises for not having informed him that he must pay tuition fees. »Unfortunately, you were registered in our system as Danish,« the email reads.

I do not fit into any category.

According to Christian Pedersen, he was later informed on the phone that the error had occurred because he has a typical Danish name, and that because of that, he ended up in the wrong category in the system. For the same reason, the university did not complete its part of his residence permit application, according to an email that the University Post has seen.

»I do not fit into any category, and every time I talk to an authority, people just wonder why I do not have citizenship. You are a Dane, what are you doing here? That is what they ask when I go to the Danish Immigration Service’s citizen service centre. Yes, I wonder that too,« he says with a laugh.

It was at this point that Christian Pedersen started to get nervous. He started the application process, but it was already too late.

»My tourist visa had already expired. I was at SIRI (The Danish Agency for International Recruitment and Integration – the authority in charge of residence permits, ed.) to have my biometrics done. I thought everything was fine, but suddenly the employee who had spoken to me for half an hour went off to talk to a caseworker. When he came back, he told me that I was in Denmark illegally and had to leave. I had no idea,« he says.

While Christian Pedersen’s fellow students completed the first module of their bachelor’s degree, he was forced to travel back to the United States.

»I was about to take my exams and had bought all of the books and paid for the first semester at the time,« he says.

His first application for a residence permit in Denmark was rejected because he had started the application process while he was unwittingly in Denmark illegally. Therefore, he sent another application from his parents’ home in the United States. This was also rejected.

The explanation for the second rejection was that the authorities suspected that Christian Pedersen did not really intend to study in Denmark. After his stay at the folk high school, he had worked for a few hours for a charity before he discovered that he was not permitted to work using his student visa. He also believes that it made a difference that the first application was rejected because the process was initiated late.

»If the first one had gone through, they probably would not have investigated second application. The whole process may have been a bit easier. The fact that I was rejected because I was in the country illegally without realising it, is a factor in whether or not I can get a residence permit,« he says.

The situation became so messy and stressful that I had to drop out of the programme.

Christian Pedersen eventually dropped out of the bachelor’s programme in natural resources.

»The situation became so messy and stressful that I had to drop out of the programme. I had already paid DKK for the first semester,« he says. »But I had missed so much teaching, and it did not seem like I would get a new residence permit, so there was no other option.«

Christian Pedersen decided to try again in the spring of 2020. He was determined to study in Denmark, so he applied to the University of Copenhagen once again. This time for the bachelor’s programme in musicology.

To his surprise, he was granted a temporary residence permit due to his Danish ancestry and close ties to the country. According to Christian Pedersen, he was told at first that he had not been accepted into the musicology programme. But then he received a phone call, he says, and was informed that a mistake has been made and that had been accepted after all.

But amidst his joy at being given a second chance, more complications arose. Christian Pedersen asked if he would have to pay tuition fees, and was told that he did not have to due to the type of residence permit he had been given.

»That meant that I would save DKK 300,000, so it was great. But a few months after I started, I got another email stating that a mistake had been made and that I had to pay DKK 47,000 within three weeks, otherwise I would be unenrolled from the programme. It was terrible. I do not just have DKK 47,000, and neither do my parents, so we had to take out a loan,« he says.  The University Post has also seen this email.

Christian Pedersen’s temporary residence permit expires in the autumn. Then he will have to go through yet another application process.

»It’s really exhausting to not know whether I will be allowed to stay.«

In retrospect, there are things that Christian Pedersen could have done differently, according to him. He could, for example, have checked more thoroughly whether he was allowed to work after his stay at the folk high school.

»It was silly of me to work. But I was only 19 years old and in a new country. And the rules are really complicated. I have asked for help so many times, but every time I contact an authority, they tell me something different.«

He says that he does not think that the rules were made to affect him.

»I am here to educate myself and contribute to Danish society in the long run. I have paid a huge amount of money to study here, and I do not get [the generous Danish student grant, ed. ] SU. So there is no way that I can be a parasite on society,« he says.

»I think I should at least have the right to complete my education. That would be in Denmark’s best interests, too. The Danish authorities already seem to think that I am a Dane.«

Get an email with our top stories in your inbox