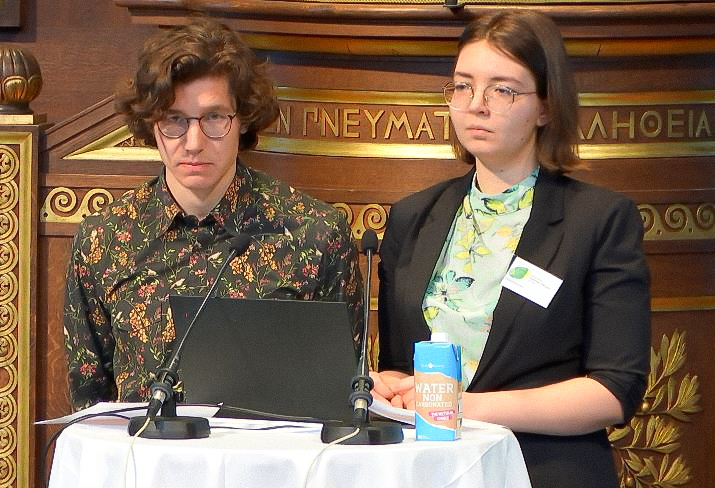 Two Ukrainian PhD students called on scientists throughout the world to stand with the Ukrainian people at the celebration of the Niels Bohr Institute's birthday. See their speech here.

The world of physics must stand together to support Ukraine during Russia’s occupation. This was the message when two Ukrainian researchers went up to the rostrum during the celebration of the Niels Bohr Institute’s birthday at the beginning of March.

Russian troops had invaded Ukraine a few days before, and two Ukrainian PhD students used the opportunity to address their peers. The message: Science can lead to peace.

»We are a community without borders, and it is in our power to stop the war and save our colleagues in Ukraine and Russia,« Mykhailo Flaks says in the speech. Tetiana Kozynets, a PhD student at the Niels Bohr Institute added:

»We would like to emphasise that, among all the other terrible things, the Russian attack on Ukraine is also an attack on science,« she says.

You can see the full video with Tetiana Kozynets and Mykhailo Flaks’ speech at the bottom of this article.

READ ALSO: CNBC, Time Magazine and France24: Suddenly, everyone wanted to talk to Yevgeniy Golovchenko about his research

In the speech, the two scientists called on their international physicist colleagues to act in the fight against the Russian invasion of Ukraine.

»We need to raise awareness about what is happening. We need to sign open letters and to make common cause in our contacts with our governments. And we must suspend, not discontinue, the publication of scientific articles from Russian state institutions,« Tetiana Kozynets says.