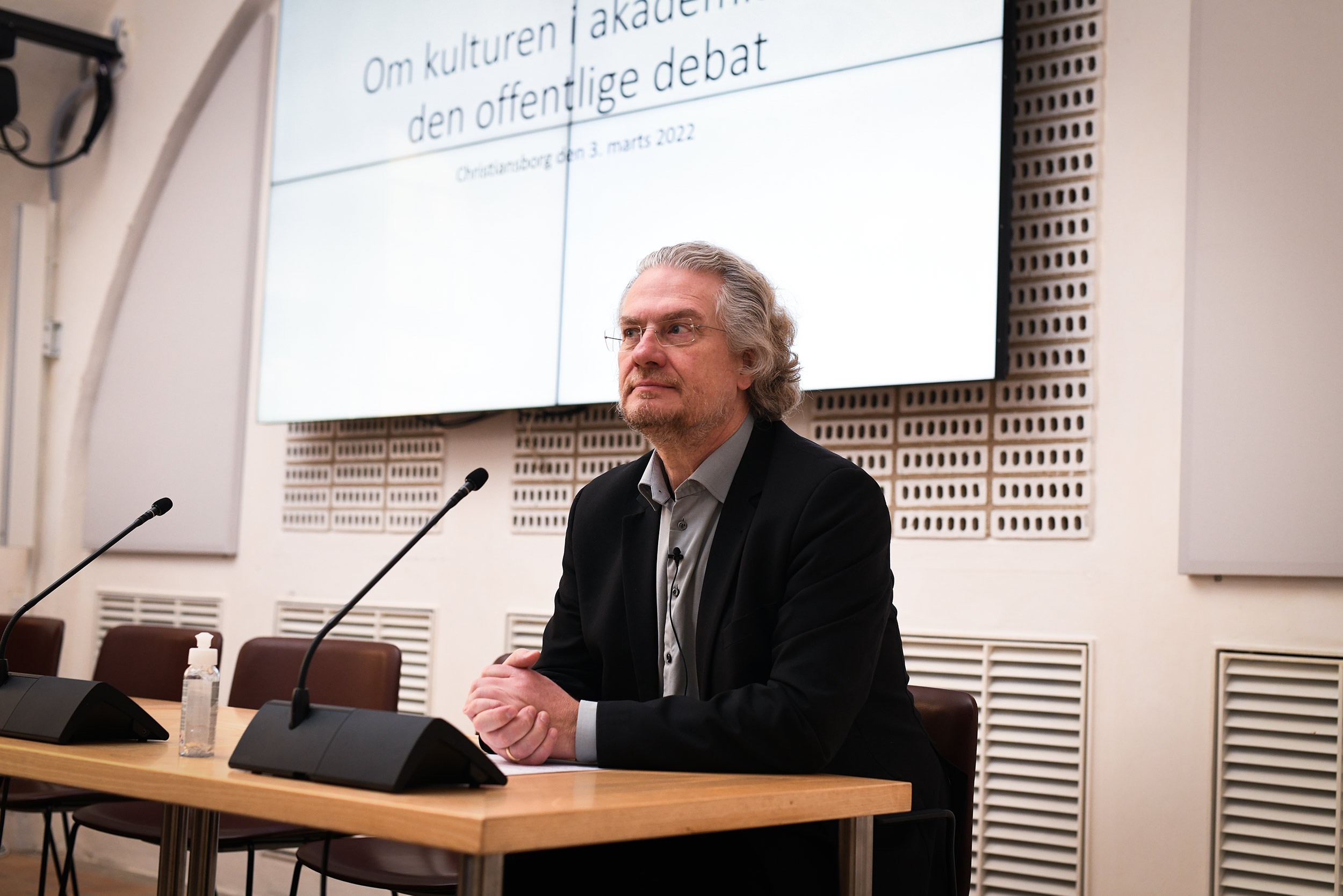 Identity politics and activist research threaten the soul of the university. And it needs to be stopped – now. This was the message from a number of determined researchers at a hearing organised by Danish politicians Morten Messerschmidt and Henrik Dahl at the Danish parliament.

She feels like she has been frozen out of academia. Shamed, bullied, and subjected to an ideological witch hunt.

She now speaks to an assembled host of like-minded peers.

Marianne Stidsen had actually withdrawn from the public debate, but she emerged again in the Danish parliament buildings Christiansborg on Thursday 3 March to recount the story of her resignation from the University of Copenhagen.

She left not for her own sake, you need to understand. But to reject the cancel culture which, according to the #metoo critic, »forced« her to leave her associate professor position on the Department of Nordic Studies and Linguistics after a series of plagiarism charges.

»It is as if they totally ignore us who have experienced the consequences of this identity-political movement. Again and again, the argument is repeated that the problem does not exist. I honestly find this to be an insult.«

Next to her, the new chairman of the Danish People’s Party Morten Messerschmidt nods, and touches his chin with his thumb while Henrik Dahl, education and research spokesman for the Liberal Alliance Party, leans back into the chair and looks out over the approximately 50 people present.

The two politicians host a hearing at the Danish parliament on the universities’ culture – after the adoption of a text in parliament last year claiming »excessive activism in certain research environments«..

All of the speakers at the hearing subscribe to the same narrative: Identity politics exists and it is thriving at universities. And it threatens core scientific values like intellectual freedom, free speech, and the scientific method.

They cast themselves as a type of freedom fighter. Those who dare to say no to »the identity-political elite«. Unlike many of their colleagues who are supposedly too scared to speak up.

»Many of my former colleagues dare not speak up for fear of provoking the activist elite and the subsequent rain of sanctions that this will entail. For their sake, I really hope that someone changes tack and puts a stop to this.«

When she has finished speaking, Morten Messerschmidt acknowledges her:

»Thanks for your struggle. I think I speak for a broad majority in the Danish parliament when I say that you can expect us to support you as much as we can.«

The time has come to take on this struggle, says Nicolai Foss,a professor at the Department of Strategy and Innovation at Copenhagen Business School (CBS).

The »sensible majority«, which he and the others in the room are supposedly a part of, need to stand up to what he describes as a small, aggressive and loud minority. Stand up to the research »that is systematically, and consciously breaking the fundamental principles of science«.

There will be more and more of this, if you are to believe the professor. He mentions the autoethnographic method, fat studies, critical racial theory – or to sum up: Research that does not respect the difference between what something is, and how something should be. And research where the results are determined in advance by a certain political point of view.

While he goes through a number of examples, the audience several times breaks out into laughter, and one person yells »this is insane!« when Foss takes up an article that supposedly is about people entering into a dialogue with rocks.

»You smile,« says Nicolai Foss, while he paces back and forth in front of the audience.

»And you can ask yourself whether something so obviously ludicrous can have any real effect? Is this not just something that takes place in the ivory tower of academia?«

»The thing about towers is that things can fall out of them. Much of this miserable stuff comes out of the universities, in particular the humanities, and sometimes they end up in the rest of society. You should not take anti-scientific research lightly.«

He calls on his fellow researchers to stand up and to join the cultural struggle for scientific values at the universities.

Too many old, white men

Many of the ills are already prevalent on the political science programme at the University of Copenhagen, says Christian Holst Vigilius, national chairman of the Conservative Students group.

He describes his programme as a left-wing, feminist and identity-political cloud-cuckoo land that both students and researchers are deeply embedded in.

»There are some perceptions of reality that are dominant, which the students have taken on. A short example: I don’t know how many times an instructor has complained that there are too many white, old men on the syllabus.«

»No way,« exclaims one member of the audience, while several others shuffle around in their chairs.

»Yes, this has happened many times!« says Christian Holst Vigilius.

This is an example of how the identity politics of the universities threatens society as a whole, he reckons. As the students of political science are the politicians and government officials of the future.

»A generation of academics is indoctrinated in these feminist and identity-political ideologies, and it is an elite that has a large influence on how society will develop.«

»We need to do everything we can to fight this totalitarian identity politics movement.«

Most people in the room agree. Praise each other, laugh and nod. But in the middle of the room there is one participant who does not share the perception that identity politics is the greatest threat to the universities.

In fact, Laura Horn, an associate professor of political economics at Roskilde University, is one of the initiators of the open letter that criticised the politicians for adopting Dahl and Messerschmidt’s text on excessive activism.

She is disappointed with this hearing, she says to the University Post.

»I came here because I had hoped to hear some good, evidence-based arguments, because I think the discussion is important and relevant. Instead, there was a lot of ridicule, and a number of absurd examples that are difficult to discuss. It was a missed opportunity.«

»I am more afraid that this discussion will lead to more political intervention into the universities. This is the real threat

And there may be more political intervention on the way.

The Danish parliament is debating a proposal to set up a national research board that will »strengthen the effort against questionable research practice and scientific dishonesty«. And there is a consultation on the way about the so-called Chicago principles, Henrik Dahl says to the University Post.

He supports both initiatives.

»Legislation is only needed if university managements do not intervene. If everyone does like the University of Southern Denmark (SDU), we are happy. Then we have achieved our purpose,« says Henrik Dahl, and mentions that SDU has started to write down their values with a focus on academic freedom.

»What we find hard to accept is the claim that the freedom of speech is not under strain. Because it is.«