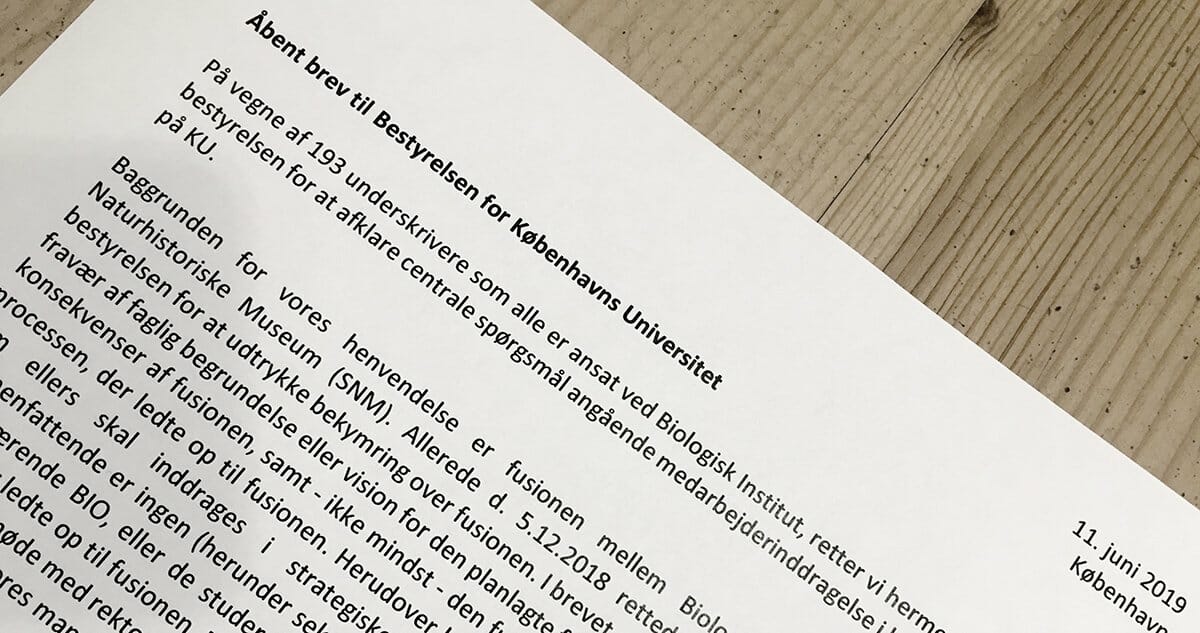 Collapsed merger — Employees at the Department of Biology spent months battling a now-cancelled merger between the institute and the Natural History Museum of Denmark (SNM). Now, they have sent a joint letter to the board criticizing UCPH’s management for ignoring employee perspectives.

A painful battle was resolved recently when the five research centres at The Natural History Museum of Denmark (SNM) were collected under the Faculty of Health and Medical Sciences (SUND). All parties were satisfied: the centres were located in a completely new institute – Globe Institute – with more resources for conducting their research. At the same time, the University of Copenhagen (UCPH) could hold on to several of its most prolific researchers.

In the subsequent press release from UCPH, one of the researchers – DNA professor Eske Willerslev – said that he hoped that he and his colleagues could find »peace and stability« at the new institute after a »chaotic period.«

It seemed like a new start. But for employees at the Department of Biology – which was supposed to house the five research groups under the original merger plans – there is still a final word to be said.

After criticizing the merger on several occasions, which members of the department say has undermined all progress at the Department of Biology (BIO) over the past six months and failed to incorporate employees into the decision-making process, the personnel have now issued a letter to the board of UCPH with 193 signatures.

FULL TEXT (IN DANISH): The letter from the 193 employees.

READ ALSO (IN DANISH: The Board of the University of Copenhagen admits that staff had not been sufficiently involved in the decision making on the merger.

The letter culminates in four critical questions, one of them being: »Does the board believe that the BIO-SNM merger process has sufficiently involved employees?«

There is no doubt about what the personnel themselves believe:

»It is our clear opinion that this unhappy situation could have been avoided if management had involved personnel in the merger process before undertaking the decision. Instead, management have repeatedly neglected the possibility of employee involvement via a series of careless and unclear management decisions,« reads the letter.

The employees have long tried to express their concerns to management without success. Therefore, say several of the staff, they are now addressing the board for the entire university.

The outcome is precisely what we had warned against

The personnel also attempted to communicate with the board in December 2018. Back then, they were met with silence, so this time they are demanding a clear answer.

The timing is no accident, says Lars Ellgaard, professor at BIO and a co-signer. The letter is a direct response to the news of the Globe Institute, which according to the employees confirms their long-held fears since the merger plans were first announced on 1 November 2018.

The merger has now been completely abandoned: The Natural History Museum will be spun off from BIO again when Globe Institute is finally established.

»They have crossed the t’s and dotted the i’s and revealed the strange situation that has emerged out of the entire process. The outcome is precisely what we had warned against,« says Ellgaard.

The Science Faculty, which BIO forms part of, is therefore losing several of its most prominent researchers and the huge external grants which follow along with them – not to mention prestige: Eske Willerslev appeared on Danish television program Aftenshowet recently to describe another one of his groundbreaking discoveries: the discovery of a new kind of people based on 31, 000-year-old teeth. Meanwhile, Minik Rosing became an international name a few years ago when he demonstrated that life on Earth emerged 300 million years earlier than previously believed, while big names such as Carsten Rahbek, Martin Bizarro and Tom Gilbert are also among the university’s most cited researchers.

The new Globe Institute will also have a budget of DKK 20.7 million annually, of which 15.2 million will come directly from UCPH’s general sources, according to a document accessed by the University Post. Meanwhile, UCPH confirmed to Danish media Politiken that the institute is DKK 15 million more expensive than the original merger plan involving the Department of Biology.

It is difficult to take the system seriously, when they say one thing and do something else

This extra expense stands is in stark contrast to the merger’s intention as a savings measure, which aimed to address SNM’s financial problems.

In the letter, the Department of Biology employees write that management has sought to address a bad decision (the BIO-­SNM merger) with a solution which is completely illogical considering the academic fields (the move to SUND).

»There have been a lot of decisions which all employees believe are unfounded and senseless, and now there is no economic advantage, either. On the contrary, the move will end up an expense instead. So this is a senseless decision which has also been unnecessary,« says Olaf Nielsen, a professor at the Department of Biology and co-signer of the letter.

However, the staff letter focuses far more on the process than the ultimate result. The chief critique from the personnel is the lack of employee involvement in the decision-making around the merger.

In the letter, employees ask whether the board believes that management has upheld national university regulation. More specifically, paragraph 10, clause 6, which reads:

»Management must ensure that employees and students are involved and their concerns are incorporated into important decisions.«

»Fundamentally, we cannot understand why more is not being done to uphold the regulation. It is a good rule which ensures that decisions are taken on the best possible grounds,« says Caspar Elo Christensen, an academic staff member at the Department of Biology and also a signatory to the letter.

»There is no doubt that the regulation has been violated here. It’s just that nobody has done anything about it.«

He says that management should have discussed the proposals with the section leaders and Academic Council rather than just informing employees of »a decision that was already made.«

Besides violating regulations, the process has also harmed confidence in management at the Department of Biology, reveals a study of the work environment – APV –  which was recently carried out at the institute.

In the study carried out by the university, only 14 percent of employees agree or completely agree with the statement »I have confidence in the dean’s way of managing the faculty.« Over half responded that they disagreed or completely disagreed.

There have been a lot of decisions which all employees believe are unfounded and senseless, and now there is no economic advantage, either. On the contrary, the move will end up an expense instead.

This translates to a score of 2.3 out of five, the lowest in the study and a 0.4 percent decline relative to last year’s APV. Everything under three prompts a red colour in the study.

The rector has also scored low: more than every third employee disagrees or completely disagrees that they feel confident in the rector, resulting in a 2.7 out of five result, 0.7 percent lower than the average UCPH score.

»You can feel it. It’s something we discuss a lot. This entire case has created strong mistrust of management, so we don’t really believe that we will be more involved in what we consider to be important decisions,« says Ellgaard.

»It is difficult to take the system seriously, when they say one thing and do another,« adds Elo Christensen.

Couldn’t it be said, that the five research groups have a co-responsibility? They have, after all, played a large role in defining the merger plans?

»I still think that we have been left with an institute that is far too big. the Department of Biology was previously one of the largest institutes, and cohesion was already a challenge. If you add the museum and the five research groups, it would become completely unmanageable. It is completely understandable that the research groups did not want to get on board with that,« says Elo Christensen.

»The five research group leaders have proved very talented at getting what they want. This is not a criticism of them. The rector and dean have simply underestimated the impact of the merger.«

Confidence will be difficult to restore, says Ellgaard. However, he adds that he hopes the institute will get a fresh start when the current dean at SCIENCE, John Renner Hansen, is replaced at the end of the year – five months early.

»We hope that the board will provide clear confirmation that employees will be listened to in the future,« says Ellgaard.

»We are lacking reflection on the entire process from the rector and board. We need someone with influence to say we can see this was a mistake, it will not happen again. To reach that point, we have written the letter.«

The board put the merger on the agenda for its meeting Monday, June 17.

Response from the rector

»I’m the first to acknowledge that the process has been far from optimal and that it has interfered with progress on other initiatives within BIO. This is a case of a merger, that we have now opted not to carry out. In Spring 2018, the local collaboration committee within the Department of Biology and IGN proposed a model whereby the five researcher groups were transferred to the institute. However, the final decision around a merger between the Department of Biology and SNM was adopted in Autumn 2018 after a long process which included a 12-person committee set up by the dean, where several different approaches were discussed. The chosen solution is primarily in response to requests from employees within the SNM research groups that all groups remain together and that the museum and research groups belong to the same expert research institute. A merger with the Department of Biology was the best solution, academically and financially-speaking.«

On the aims and reasoning:

»I do not agree, that these were not good grounds for a merger. It’s important to remember that many of the SNM groups came from Biology just a few years ago. The idea was that the research centres from the museum would be anchored at one or several departments with management and an administration which was exclusively focused on institutional operations and the development of research and education. This could have strengthened and synergized the fields of biology and geology and impacted future financing in a positive way. This could also have strengthened research-based education. Furthermore, it could have done the work of embedding some of the centers after cuts to fundamental research centre grants. As a side benefit, the management of SNM could focus its attention on developing the museum, including realising the demanding and complicated museum construction and improving the use of the new fantastic frameworks for collections and exhibitions.«

Why the Faculty of Health and Medical Sciences?

»I acknowledge that from the outside it can seem strange that the new Globe Institute will fall under SUND. But several of the groups will now direct some of their research towards health and medical sciences and contribute to a better understanding of how illnesses arise and develop. Earlier in the process, the five researcher groups have rejected the idea of an independent centre within SCIENCE, referring back to the dean who identified SUND as a good solution. This has been endorsed by management and the board.«

After this article was first published, the Board of the University of Copenhagen admitted that staff had not been sufficiently involved in the decision making on the merger.