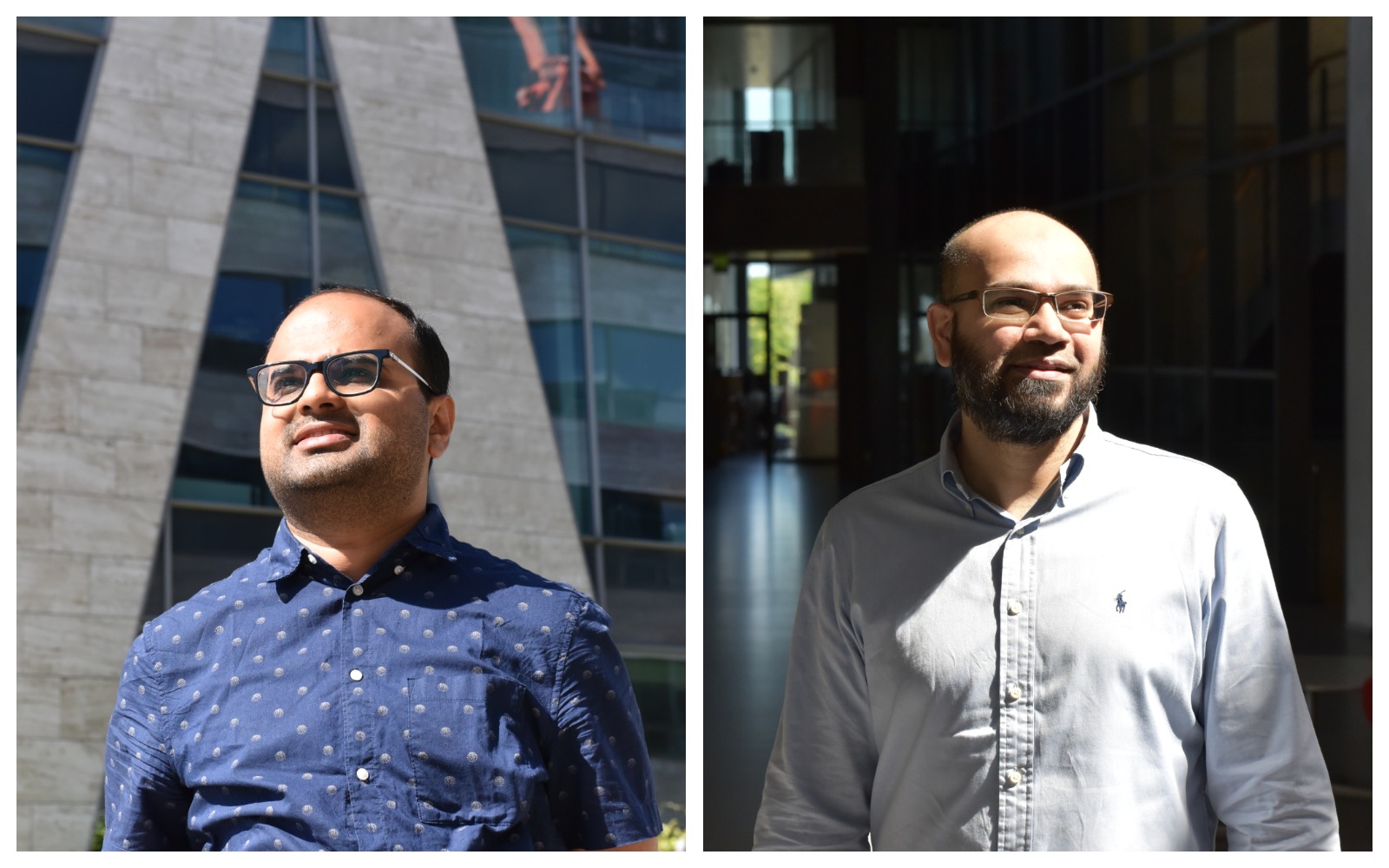 Navneet Vasistha (left) and Muhammad Shoaib (right) have both been busy, very busy, after the corona crisis delayed their projects.
image: Rasmus Friis/Uniavisen

Impossible deadlines, money running out, and a future that is suddenly uncertain. This is the situation for two foreign researchers at the University of Copenhagen.

Not easy when the laboratories where he works have been virtually deserted for more than two months. In fact, everything suggests that it would be impossible.

This is not because Muhammad Shoaib, an assistant professor of molecular biology, has been shut off from his laboratory. On the contrary, he has been working intensively on his experiments during the lockdown – for the past two months he has only taken a couple of days off, weekends included. His colleagues accepted that he would have to be one of the two people that the research group were allowed to have at the university for a long period of time.

His predicament comes from the fact that French and German researchers, who had to analyse his data, and who have also been separated from their work, can only deliver their contributions in July or August. After the time, in other words, that Shoaib’s contract has expired.

The options are narrowing, and it’s hard to think about the next steps you have to take.

»I need this data to complete my article. This means that the project is completely at risk right now. I don’t know what will happen,« he says.

Shoaib’s plan was that, after seven years in Denmark – and before that seven years in France – he would go back to his home country Pakistan, where a large part of his family lives, and where he wants to start his own research group.

Now it’s not even certain that he will be able to get on to a plane to Pakistan during the summer. And even if he does secure himself a job in his home country, he will be forced to continue working on his BRIC projects, free of charge, during his spare time.

He has spent too much time, and too much money, to achieve his results, and then just drop them.

»The question is how I can solve it? I’m probably going to have to complete everything from home while waiting for a new job. This is not the best solution, but I am willing to continue working without funding. I just can’t leave the projects at this point, because this is the result of the last two to three years of my work,« says Muhammad Shoaib.

Ten months’ work in half a year

Muhammad Shoaib is one of the temporarily hired researchers who, according to associate professor and union representative for temporary staff at the Faculty of Humanities, Dan Hirslund, is feeling the consequences of the crisis more than most people. Many research projects have been delayed while the universities have been empty, but the grants that many employees are taking their salaries from are not automatically extended. This means that, during the lockdown, the researchers have emptied a good portion of their funding without being able to proceed, and they do not have the prospect of having it filled up again, even if they are given more time.

At the same time, it increases the uncertainty for many international researchers that they do not have a permanent base in a country, but still have to find a new destination during a time of closed borders and hiring freezes.

My project is in danger right now. I don’t know what will happen

This applies, for example, to the Indian postdoc Navneet Vasistha, whose contract expires at the end of March 2021.

Unlike Muhammad Shoaib, he has not spent many hours in his laboratory at BRIC while the university has been closed, and it has cost him more than just a couple of months.

He is doing research on the neurological preconditions for mental disorders such as schizophrenia, autism and epilepsy. As a central part of his project he is examining the illnesses in experiments with mice. These kinds of experiments take a long time to carry out. The mice have to be bred in a certain way, for example. But Navneet Vasistha had to interrupt this complicated process when the Danish government, from one day to the next, shut down large parts of the country.

Instead, he just had to keep the population of mice at a level that he and his colleagues could handle, even when they only had to visit the university every now and then.

So while many researchers have been able to resume their projects after the Danish parliament allowed the reopening of parts of universities 27 May, Navneet Vasistha has had to start over.

»We need to spend the first few months increasing the number of mice before we can start our experiments again. This has set us back three or four months,« he says.

Behind him, the offices are empty. Only the footsteps of one other researcher interrupts the silence of BRIC’s sun-lit corridors.

Navneet Vasistha does the calculation: He only has six months to do the work he should have done in ten months, until his Bridge Fellowship, a postdoc programme supported by the Novo Nordisk Foundation, expires at the end of March next year.

This puts him under »tremendous pressure,« he says. Even though he is prepared to use a good part of his waking hours at the university in the coming months, he fears that the research that comes out of these efforts will not be of the quality that he is used to producing.

Ultimately, this could influence his future in the academic world.

The hope is, he says, that his research project can be extended. Then he can get the results he was aiming for before the lockdown, which can lead his career forward.

I firmly believe that when an accident or crisis occurs, then there are also opportunities.

Navneet Vasistha has not yet heard anything from the University of Copenhagen or the Novo Nordisk Foundation suggesting that he can continue as a postdoc, also after March 2021.

»I don’t know what will happen,« he says.

And Muhammad Shoaib does not have great hopes for a paid extension either:

»From my point of view, it would, of course, be best if I could be extended for a few months, but this was a situation that no one could have predicted. BRIC has already made plans for the period after June, and new people are on their way here. So it’s hard to expect that you can just get an extension.«

In the crisis, there is hope

The two researchers have to now face the fact that the corona crisis has left them in dire straits.

Navneet Vasistha, for example, has had to cancel conferences during the corona crisis, where he was to have presented his results and met future co-operation partners. These are opportunities that have simply disappeared.

At the same time, he knows that it is probably more difficult to secure a permanent job in the academic world, when universities throughout the world have to pay bills due to delays and – possibly – declining funding from governments, foundations and companies.

»The options are narrowing, and this makes it hard to think about the next steps you have to take,« says Navneet Vasistha, but then adds:

»It makes no sense to me to spend time worrying about it now. In six months, I will know what the consequences have been.«

Muhammad Shoaib has to deal with the consequences now. He has not heard from the university in Pakistan where he has applied for a permanent position, because, as he says, the universities are currently just trying to avoid firing staff, not hiring new ones.

But he has a contingency plan: If he is unable to find a job in molecular biology, where labs and large sums from foundations are needed, he is considering changing tracks to bioinformatics because he, during his research career, has analysed large amounts of data. In addition, he will train himself further in online courses, he says.

»This is a completely new, improvised, contingency plan. I firmly believe that when an accident or crisis occurs, then there are also opportunities. You just have to not lose faith, and to seize the opportunities that arise.«