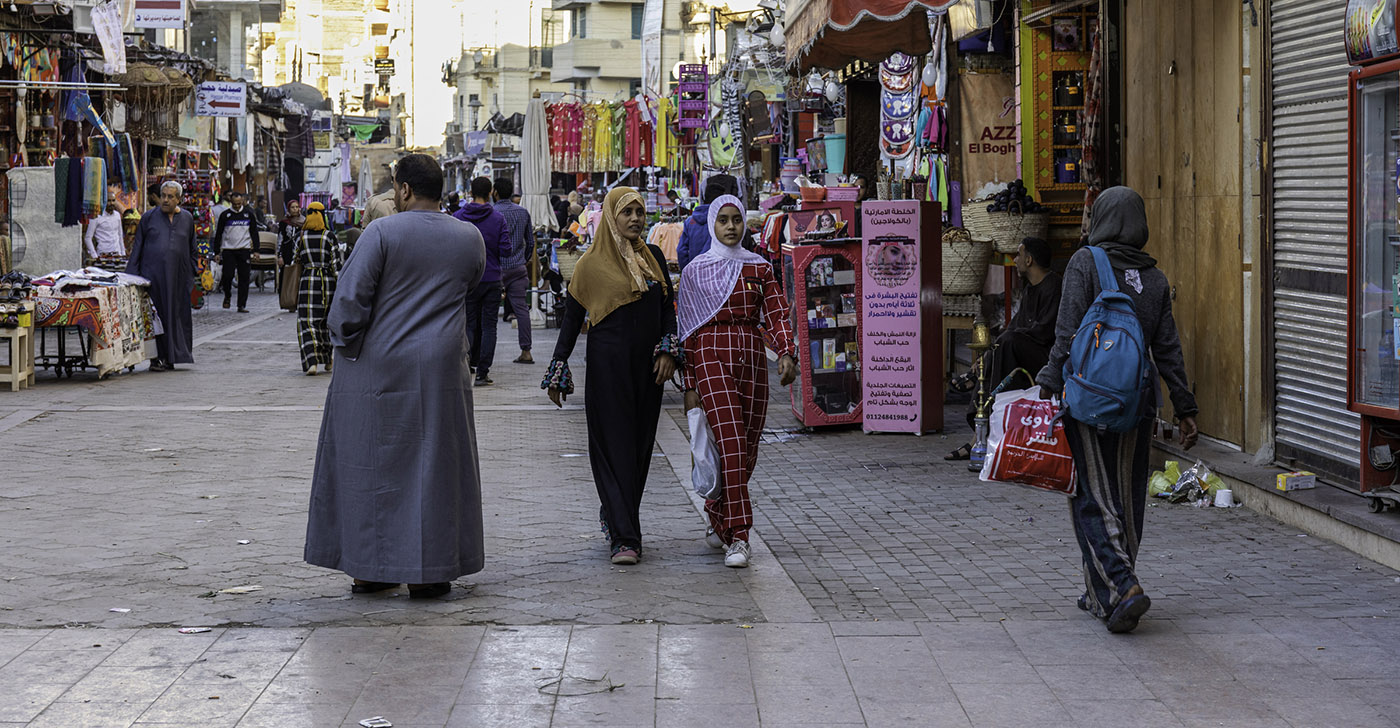 Some students find the representations of the Middle East they find in their teaching texts problematic. Especially regarding the position of women. Others see themselves in the texts. (Photo from Aswan's Old Souk, Egypt).
image: GarySandyWales/istock.com

Some students criticise the teaching materials on their Arabic language course. They are outdated and should portray a wider range of lifestyles in the Middle East, they say, and suggest adding a disclaimer to the textbooks, to remind the reader that they were written in a different era.

A message thread in an internal Facebook group for students of Middle East studies at the University of Copenhagen caused a stir last week.

The first texts that students encounter when learning Arabic are problematic, according to the authors of the thread. Texts about war, for example, reinforce existing prejudices about the Middle East, instead of disproving them.

»The first texts you read on the course are important. We learned terms related to war before we even learned how to say how old we are or talk about our hobbies in Arabic. When I learned French, the first thing I learned was how to say what I like doing, what my name is, and how old I am,« says Solaf Masoud.

She is doing her second semester of Arabic and is one of the students who started the debate.

We learned terms related to war before we even learned how to say how old we are or talk about our hobbies in Arabic.

Following the online debate, the students met with the associate professors who originally created the teaching material.

The debate on the Facebook thread was described in a featured comment on the Danish-language version of this site here.

»A few first-year Arabic students find it problematic that words such as ‘terror’, ‘poverty’ and ‘housewife’ are included in the introductory courses in Arabic language,« writes Middle East studies student Karoline Thomsen in the article.

Later, Danish newspaper BT published an article about the debate under the headline Language students criticise the inclusion of the word ‘terror’ in the Arabic curriculum [in Danish].

But the students say that the articles were not entirely accurate. While the online debate was about certain words, their aim was not to remove specific terms from the curriculum.

»We are aware that these are realities that exist in the Middle East. It is not our intention to delete words, but we just want to see more realities represented in the material,« says Margherita Aroli, another second-semester student of Arabic.

The students are, of course, aware that there are housewives, war and terror in the Middle East, she says. But she wants these themes less prominent in the texts.

»It is a pity that what we read about and the words we learn very early on in the process often feed into the narrative that the Danish media promotes. Why not include other perspectives that show what the Middle East also has to offer? It is a shame if people get the impression that these are the only realities that exist,« says Margherita Aroli.

Climate change and feminism are absent

On 24 March twenty-or-so students met online with the two associate professors responsible for developing the teaching materials 18 years ago, June Dahy and Ulla Prien. The University Post was allowed to attend the meeting.

At the meeting, students gave examples of texts they consider to be outdated.

… we just want to see more realities represented in the material

One student mentioned a text about women in the Gulf countries who are told that if they get bored, they can go shopping. Another pointed to a text about an Egyptian girl who stays home from an outing because her father says that she should. A third highlighted a text that states that some Muslims do not want to attend weddings because music is played.

»We want more topics we can reflect upon,« said Solaf Masoud after the meeting. She does not think that the themes in the texts represent the positive aspects of the Middle East, and cannot understand why she has to read these texts in particular.

»Climate change, feminism, or the Arab Spring for example. It should not be about seeing the other as a contrast, but rather seeing yourself in others.«

At the meeting, a working group was created to look into how the texts could be updated and developed. But it takes time and money to change teaching materials, as the students are well aware.

But they have an alternative suggestion for what to do with the texts in the meantime.

»We were inspired by watching Aladdin. At the start of the film, Disney warns viewers that the film contains stereotypes and negative portrayals of people and cultures. Instead of removing the film, Disney wants to raise awareness about its content so we can talk about it and learn from it,« says Margherita Aroli.

They propose adding a similar disclaimer to the textbooks for the Arabic course.

»It’s not that their [Disney, ed.] intentions were bad at the time; rather, it is an acknowledgement that the film was made in a different time. In the same way, the intentions behind the Arabic texts were not bad, but they belong to a different era, not 2021.«

Other students on the Arabic programme cannot see the problem with the texts, however.

The text about music at weddings is »still very current and authentic,« says Fatema Juriah. She lives in Iraq and is studying Arabic at bachelor level via distance learning. She has completed the introductory language courses.

If I am attending a wedding and there is music, I might turn up and say hello and congratulations, but then leave again.

»Many people would not participate if there is music. I’m one of them. I see myself as a devout, practicing Muslim. If I am attending a wedding and there is music, I might turn up and say hello and congratulations, but then leave again.

»It’s nice for me to be able to identify with the texts,« she says.

Magnus Arvid Boes Lorenzen, a student of Assyriology and Arabic, does not think there is anything wrong with the themes in the texts either.

»In a scientific institution, it is important to make peace with the fact that we have to talk about things that exist in reality, even though they may be difficult to address.«

Not a sociology textbook

The discussion about the Arabic language texts can be seen as part of a broader trend where students take a critical look at their curriculum.

Most recently, psychology students criticised their curriculum for being too one-sided and empirically focused.

The two associate professors who wrote the teaching materials and who still teach the Arabic language courses welcome the discussion and the students’ input.

»We want to look ahead and see what might need updating. We would very much like to collaborate on this, and it would be very useful to have input and feedback from the students, who have started a committee. We already took some steps last year to figure out the practical implications of different types of updates,« says Ulla Prien.

We want to look ahead and see what might need updating.

When the two associate professors wrote the texts 18 years ago, they thought more about the linguistic content than about the themes. It was about teaching the students some words and grammar, according to June Dahy.

»Many of our considerations when creating the material revolved around language learning.«

While taking the introductory courses in Arabic language and throughout the programme, the students have other subjects that will teach them about Middle Eastern culture, history and society.

»We did not see it as a textbook in sociology, and our material does not stand alone. The texts should provide the students with input that helps them to learn the language and work with grammar,« says Ulla Prien.

Many texts are still valid

There are some places in the texts where it would be easy to alter the tone slightly, according to her.

»One of the examples the students mentioned is that in one of the texts it is said that women can just go out shopping instead of being bored. It is a reproduction of authentic conversations, but you could consider whether they should be going to martial arts or another sport instead,« says June Dahy.

Many of the situations and conversations that are described still take place today.

We do not claim that the texts show ‘how Arabs are’.

»There is a lot that is still valid. It is true that there have been new developments that are not depicted. But the situations portrayed in the material are not situations that you never experience anymore. You can still encounter a father who thinks his daughter should study for her exams instead of going on an excursion. I do not accept the premise that people think that Arabs are terrible people because of that example,« says Ulla Prien.

»We do not claim that the texts show ‘how Arabs are’. If we did, it would be justified to sound the alarm bell,« she continues, pointing out that in the text in question, the rest of the group of friends leave without parental intervention.

Snapshots in time and space

The Arabic speaking world is vast. With 22 different countries with their own traditions and customs, the texts can only ever be snapshots in time and space, says June Dahy.

»Texts cannot really be anything other than snapshots when they are written down. Culture and language never stand still.«

The two associate professors do not think it is necessary to warn readers that the texts are 18 years old with a disclaimer, they say.

»I do not think that is a good idea. Instead, you should have a discussion about how society has evolved. That is a conversation we could easily have in class,« says Ulla Prien.