Briefing: The Danish Study Progress Reform from cradle to grave

A controversial chapter in Danish education policy history draws to a close.

The Study Progress Reform, the focal point of student protests and politics since 2013, has this summer got what looks like its last push into the abyss by the governing Liberal Party (V).

The reform could be on its way “into the grave”, the Liberal Party Minister for Education, Jacob Engel-Schmidt, said at the end of July on the Danish news site Politiken.

A message that a number of parties in parliament will back up when politicians return to Christiansborg after the summer recess.

The introduction of the reform, the mitigation, and now possible abolition of Study Progress has always been in dispute, even though study completion times have been drastically reduced.

The University Post outlines here the most important events in the reform’s short, tumultuous life.

It had been on the cards for a long time. Denmark needed to reduce the time students needed to complete their studies.

Danish students – and especially those from the University of Copenhagen (UCPH) – were notorious among Europeans for their tardiness, according to OECD reports, and in the spring of 2013, the Danish parliament in Christiansborg castle acted.

It started out peacefully at Christiansborg when the talks began. There was wide political agreement on the reform. All parties except the far-left Red/Green Alliance (EL) voted for it, when the then-governing coalition of the Social Democrats, Social Liberals and Socialist People’s Party tried to reduce students’ completion times.

Objective: To shorten the average time to completion by 4.3 months by 2020.

How to do it: Obligatory enrollment in subjects and exams equivalent to 30 ECTS points each semester. Students would lose their SU student grants if they missed a step and were delayed for more than six months.

“Students should be full time students,” the minister behind the reform, Morten Østergaard of the Social Liberal Party, said at the time. And in the face of warnings by experts that the Study Progress Reform had a downside, he stood firm.

“I am convinced that I would have been a better student if I faced the reform’s requirements,” said Østergaard, when the University Post asked him in 2013 why he himself had spent nine years completing his Political Science studies at Aarhus University.

The ink from the signature on the progress reform deal had barely dried before the first student protests began.

“I am convinced that I would have been a better student if I myself faced the reform’s requirements,” said Østergaard, when the University Post asked him in 2013 why he himself had spent nine years completing his Political Science studies at Aarhus University.

Blockades, meetings and minor demonstrations were a part of everyday life at UCPH in the spring and fall of 2013, and in November the country’s students bared their teeth with a major demonstration in Copenhagen.

Slogans like “reformed is deformed” and “academic spirit – not the assembly line!” were painted on banners when up to 9,000 students marched through the inner city and gathered in front of the UCPH rector’s office to show their dissatisfaction. 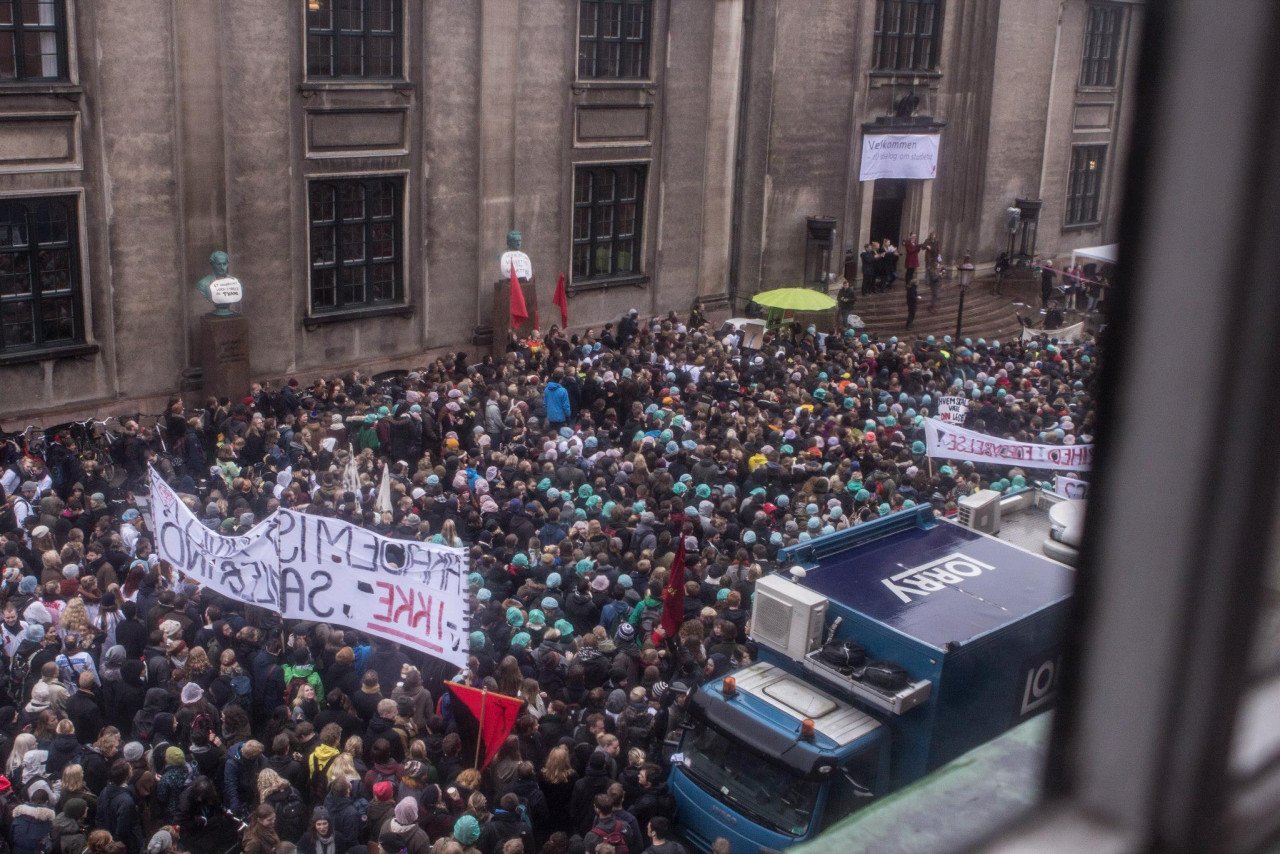 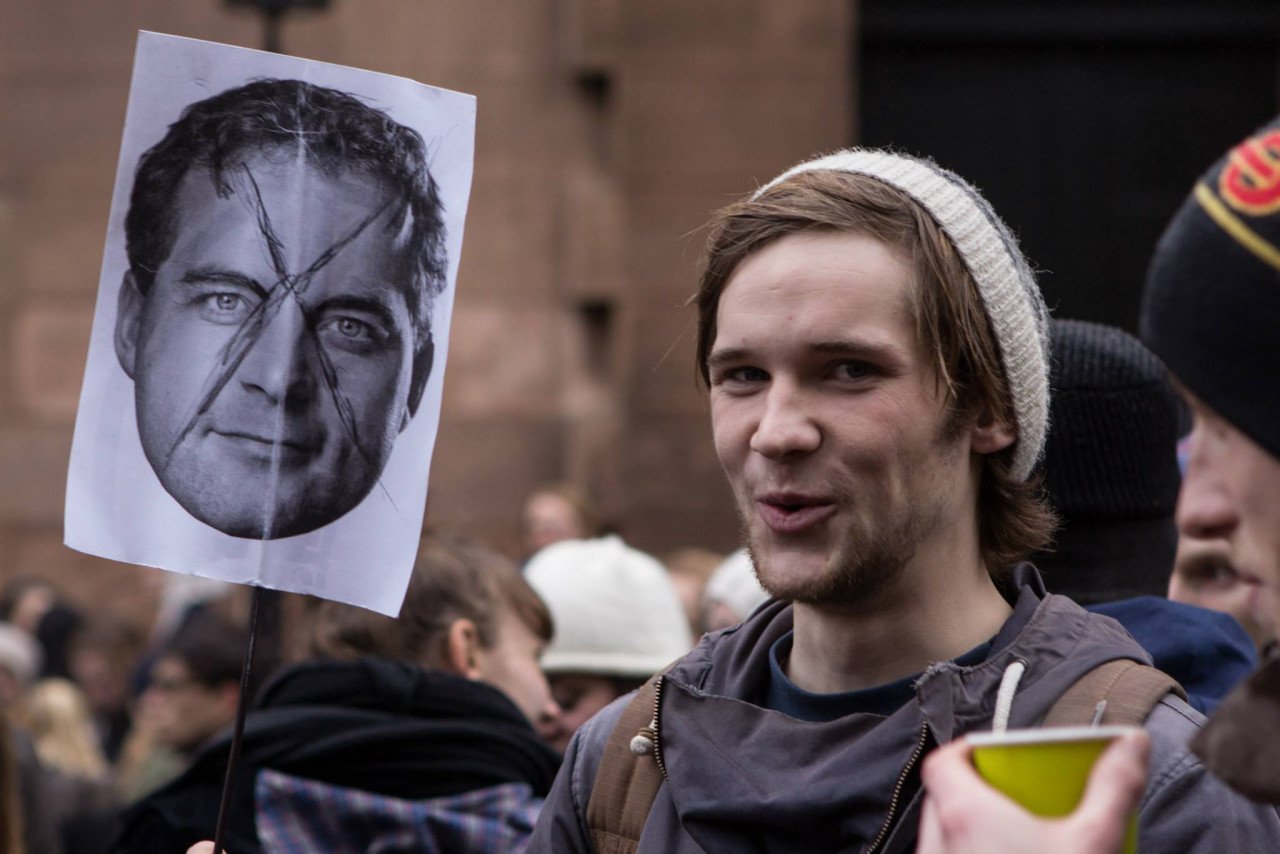 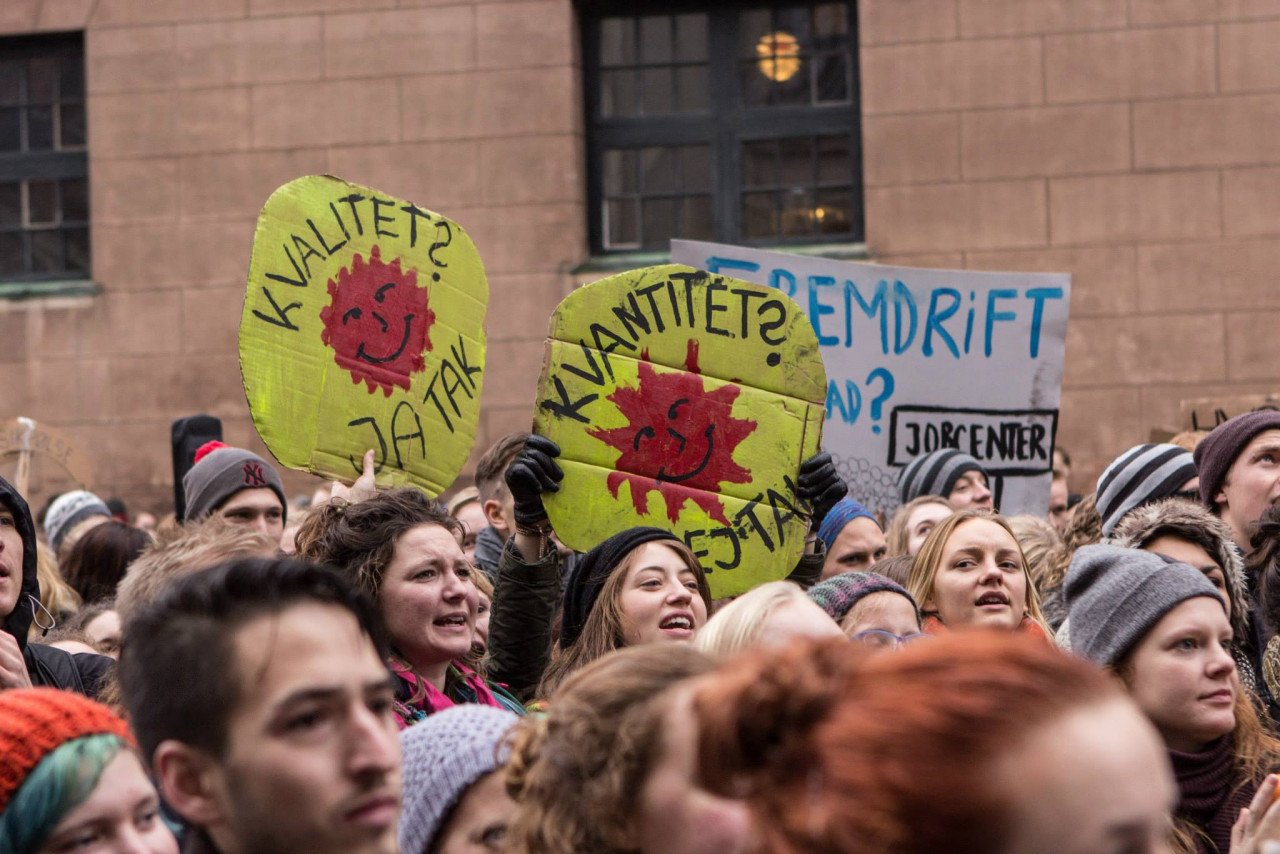 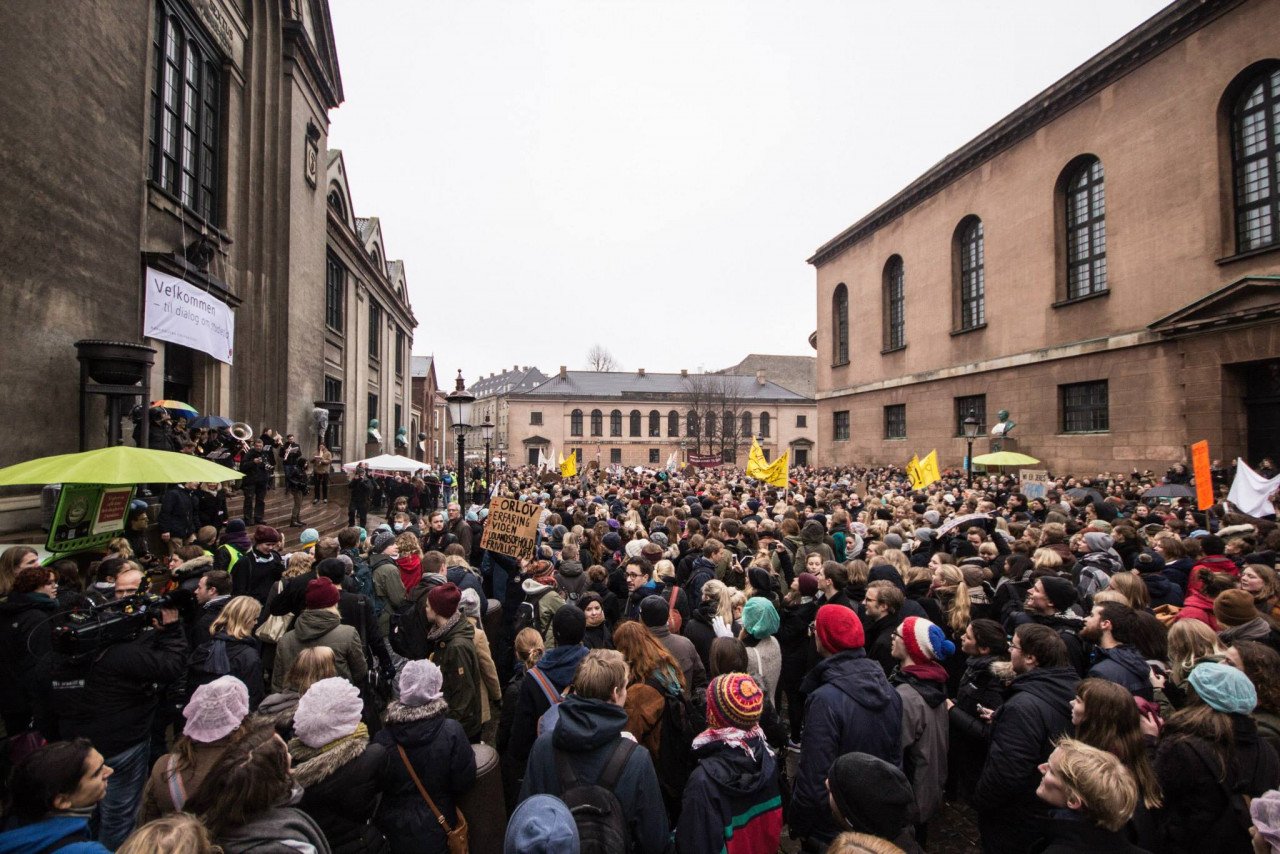 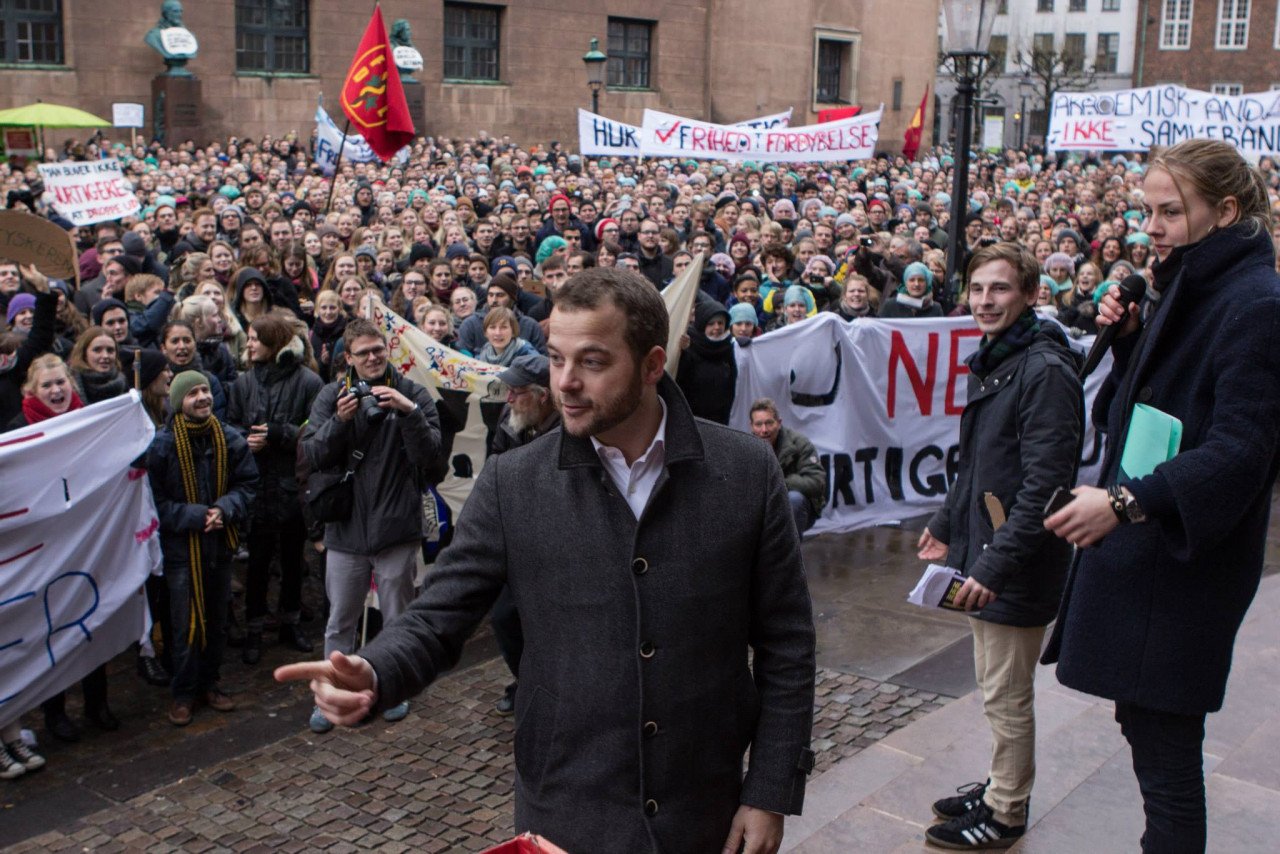 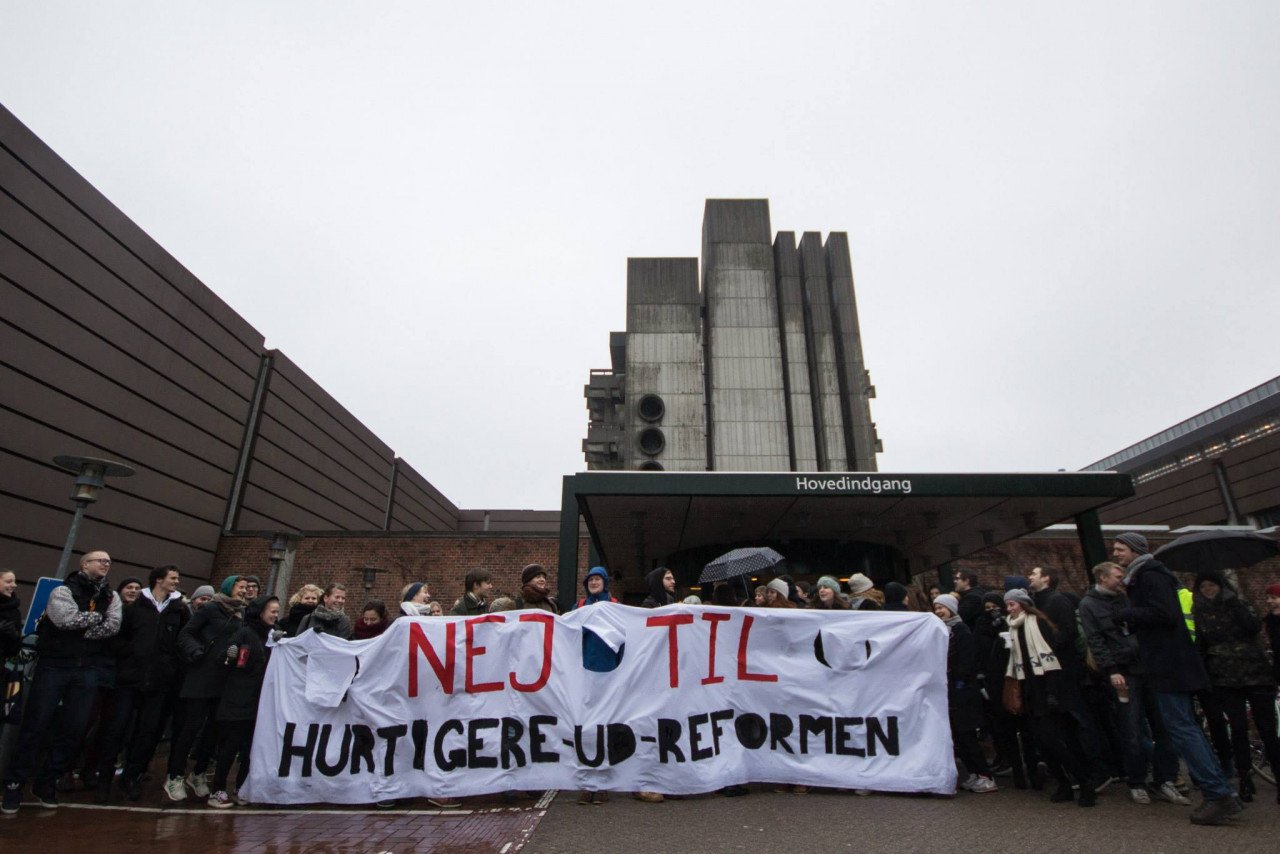 There were blockades of the Panum Institute and other places at UCPH before the demo at Frue Plads square
image: Rasmus Preston

The Rector of UCPH also argued against the politicians’ requirements, and for once, management and students found common ground in criticizing the politicians.

“We understand that the students are concerned about this. The situation is very messy. After six months, the minister has still not presented how they will administer this,” the former rector, Ralf Hemmingsen, said to the site Politiken.

Time after time, UCPH management pointed out that the reform would be almost impossible to implement without it ending in administrative and bureaucratic chaos.

The longer the progress reform moved towards becoming a reality, the more difficulty it became to implement.

This could also be seen by Morten Østergaard and his coalition signatories, and after the autumn’s demonstrations, the Minister for Higher Education called in all the parties behind the Study Progress Reform for a crisis meeting. It ended in a (small) victory for those who resisted the reform. It was to be postponed one year. Students who were already admitted to universities were now to be hit by it in 2015, while new students were to face the new Study Progress rules from September 2014.

May 2015: One step forward and ten backwards.

The 1-year postponement proved to be the first in a wide range of mitigations which the coalition was forced to concede on the progress reform.

But it would get bad before it could get better.

In May 2015, the reform was only one year old, but it was still racked by childhood diseases.

The University Post listed in May 2015 ten backward, regressive steps caused by the progress reform, each one more absurd than the other.

One was the case of the biology student Ditte Staffelt. Prior to her biology programme, Ditte had spent a year studying theatre science, but had regretted her choice. 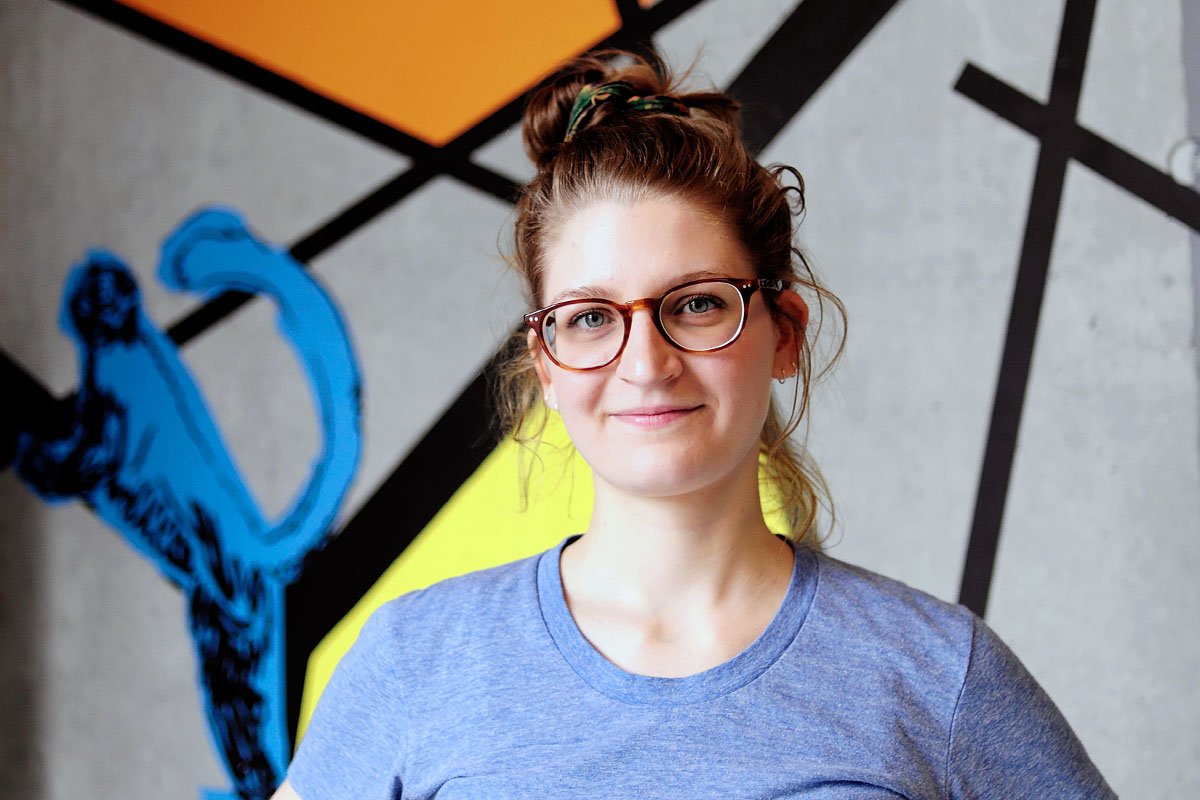 Ditte Staffelt got credit, but against her will
image: Anders Fjeldberg

Now the progress reform’s requirement of obligatory credit kicked in, and she could suddenly look forward to becoming a biologist with a specialty in theatre science.

At the same time, the number of re-examinations at UCPH exploded by 270 per cent, as the post-registration for electives disappeared. Positions as instructor remained vacant, as far fewer students dared take a teaching job next to their studies.

There was no comfort to be had from the University of Copenhagen’s study administration which according to the Prorector for Education Lykke Friis was simply following orders:

“The Study Progress Reform is not a flower that has grown in our garden on its own, and all the controversy can be traced back to it,” Lylle Friis said to the University Post.

“The study progress reform does not work well enough.”

This was the swift judgement of the new Minister for Higher Education, Esben Lunde Larsen (Liberal Party), in November 2015.

Prior to this, the Social Liberal Party, which had been perceived as the architects of the reform, had been given a thrashing by the voters at the parliamentary elections of June 2015.

Half of the party’s voters had disappeared over the course of four years, and within the party, according to the Politiken site, the speculation was that especially young people had punished the party for the hated reform.

The winds of politics had changed direction, and the new Liberal Party government sat down with the Social Democrats, the Social Liberals, the Socialist People’s Party and the Conservative Party to soften the rigid study progress reform.

The compulsory enrollment requirement for 60 annual ECTS points disappeared, and course credit should, in the future, be professionally relevant.

But the ‘study progress’ was not dead.

Major parts of the reform still remained after the adjustment in November. And the parties in parliament noted with satisfaction, that they had already shaved 1.4 months off the average study completion time.

“We give the institutions better opportunities for local solutions, and more freedom so they can focus on the education programmes where students are delayed the most,” Esben Lunde Larsen said, and left it up to the universities to find out how another 2.9 months could be cut off average completion times.

Working under the threat of incurring a huge financial penalty, UCPH management began in spring 2016 the difficult negotiations on the Study Progress Reform at UCPH. In May 2016, of these talks, was received with mixed emotions.

The Student Council’s Malou Astrup praised the fact that the ECTS strictures had been relaxed, and that it was now again possible to enroll on electives.

“The students can breathe a sigh of relief. Students at UCPH now have more flexibility – you can now take less than 60 ECTS a year without landing in the ditch,” she said.

But critics, on the other hand, argued that the new agreement – which is  still valid today – is worse than the original reform.

“How can you present the abolition of unjustified leave on your master’s degree, the adoption of a 45 ECTS “pass requirement” and a reduction in the maximum number of years at study as the end of the Study Progress Reform?”, a critical University Post reader asked in a comment thread.

The University Post can’t be the referee in a debate between Study Progress 1.0 and Study Progress 2.0, but simply requotes the former Prorector Lykke Friis’ comment when the new agreement between students and management fell into place last spring: “It has been a give and take process”.

After the mitigation of the reform and the new set of rules for UCPH, the storm surrounding the progress reform has abated.

At least until now.

The fifth consecutive minister since the launch of the Study Progress Reform, the Liberal Party’s Søren Pind, has taken over the Ministry for Higher Education and Research – and he plans to leave an impression.

“It [university, ed.] has to be difficult,” Søren Pind, said to the University Post when it met the charismatic Liberal Party politician earlier this year.

What this means is hard to discern. But if you read interviews with Søren Pind since his accession, it is clear that the quality of education should be more important than getting through your studies quickly.

The clearest statement of what the future holds for the Study Progress Reform came when the VLAK-coalition government and Søren Pind announced their proposed university grants reform.

The government wants to change fundamentally the way higher education programmes are financed in Denmark.

“If we get our grants reform through parliament, then I see it (the Study Progress Reform, ed.) put to rest,” Minister for Education, Jakob Engel Schmidt said to the site Politiken.

The question is whether the Study Progress Reform will, actually, be put to rest with the new grant system – or whether it resurrects itself as an evil spirit.

The University Post could, following a released sketch the reform, note that it could be financially disastrous for the University of Copenhagen, making administrators long for a return to the good old days of Study Progress.

Søren Pind wants to make ten percent of university grants dependent upon whether students complete their studies on time and upon how quickly they get jobs.  This is a parameter where UCPH is notorious for its low performance relative to other Danish universities.

And to make it even more confusing, the Jyllands-Posten news site could report last week that the Study Progress Reform, as it stands, seems to be working. Students have certainly speeded up and are now completing their studies 3.9 months faster than five years ago.

At the same time, the latest message from the Social Democrat education spokeswoman Mette Reismann is that they should keep the costs down and leave the Study Progress Reform as it is.

“The Social Democrats are pleased with the way the reform works now. It had some objectives, and it has had some positive effects, for example, in the form of reduced student completion times. There may be a few details in it that should be mitigated, but we have not been presented with anything that make us believe it should be abolished,” Mette Reissmann said to the Forskerforum site on 7th August.