Researchers in search of the good party

Big data — Anthropologists are combining big data and their field notes to map out what it is that constitutes a good party. They hope to be able to test classic social science theories.

Almost 1,000 students voluntarily allowed their smartphones to be monitored when they started at the Technical University of Denmark (DTU) in 2013. Their anonymised meta-data on their calls, text messages, and geo-locations, were extracted for several years, and analysed by researchers from both UCPH and DTU.

It sounds like something out of a George Orwell novel. But the anthropologists and sociologists of UCPH actually used the data for something that the students themselves might find useful. In the innovative social data science experiment, they mapped out what it is that constitutes a good party by comparing the different types of data from mobile phones with in-depth material from anthropological field studies.

“The purpose is to develop a method by which we can quantify and compare different types of social atmosphere. If it is possible to develop this method, this will have far-reaching consequences,” says Professor of Anthropology Morten Axel Pedersen.

Taking Big Brother to the party

HOW THEY DID IT

Almost 1,000 first-year students at DTU were issued with a smartphone in 2013.

This was in connection with the two interdisciplinary research projects ‘Sensible DTU’ at DTU and ‘Social Fabric’ at UCPH. Today, they are known collectively as the ‘Copenhagen Social Networks Study’.

People dancing on the sofas. Lights flickering. Two human faces poke out of the necks of a pair of animal torsos in soft fleece. Others practice a choreography on the dance floor in the midst of a stream of shuffling party-goers.

This is how PhD in anthropology My Madsen describes a party that the research project is based on. In 2013, she enrolled as a student at DTU as a part of her PhD project, where she did an in-depth ethnographic study by participating in teaching, the introduction programme, and the social events during the first year of the engineering study programme.

The field study belonged to the interdisciplinary research project ‘Copenhagen Social Networks Study,’ and My Madsen was herself given a Big Brother smart phone. In 2017, My Madsen, Morten Axel Pedersen and four researchers at the Department of Anthropology and the Department of Sociology compared the two types of data. This led to an exceptional mapping out of the party, she says.

“When you are at a party, then there is no doubt in your own mind about whether it is a good or bad party. But it’s hard to put your finger on exactly what it is. In the digital data, you cannot see how something is experienced or felt. This you can see, on the other hand, in the ethnographic data,” says My Madsen.

"When you are at a party, then there is no doubt in your own mind about whether it is a good or bad party. But it's hard to put your finger on exactly what it is.

My Madsen and the other students’ phones always had their bluetooth enabled. Every five minutes her mobile phone measured exactly how close it was to the other phones. The researchers were then able to see how people were placed in relation to each other, says Morten Axel Pedersen.

The data from the phones could show, for example, how many people attended the party, where they were placed in the room, and how different groups or ‘parties within the party’ were formed and dissolved over time. This gave a completely different overview, according to My Madsen:

“On the other hand, you could see the larger interactional context of the digital data. And you can also map out the social relations and networks more precisely. When you are at a party as an ethnographer, it is impossible to see all 200 people in the room. So this kind of overview is impossible to achieve,” she says.

The party is more than just a party

The ‘Copenhagen Social Networks Study’ was one of the first research projects which began to take social big data seriously, according to My Madsen. In the years since, researchers from UCPH and DTU have produced an extensive amount of new research based on this unique data set. At the Department of Public Health, researchers are working to identify young people’s sleeping habits in connection with their smart phone use, and a group of economists, sociologists and physicists have previously looked at what you can predict about people’s behaviour on the basis of their social networks.

A party, in this sense, is a place to explore what a social atmosphere is.

Does this mean that you have found the formula for a good party?

“No. Sadly no. If we had done this, we would probably be millionaires. But we have come a long way in terms of developing ways in which you might be able to do so in the future,” says the professor.

You can potentially use the same techniques and methodologies to understand and perhaps even predict other social atmospheres. And their research indicates that both the light, temperature, volume, level of activity, interaction and location all have an impact on how good the party, or the atmosphere is.

“Can we begin testing classical and influential theories within social science by using social big data? These have often been tested via qualitative methods, but this allows us to test them both qualitatively and quantitatively.”

Morten Axel Pedersen says this about the prospects for research which combines ‘large’ quantitative data with ‘deep’ qualitative data like My Madsen’s field study at DTU. In this way, the research has become a kind of pilot project, the design of which can be used on other social data science projects according to the professor. 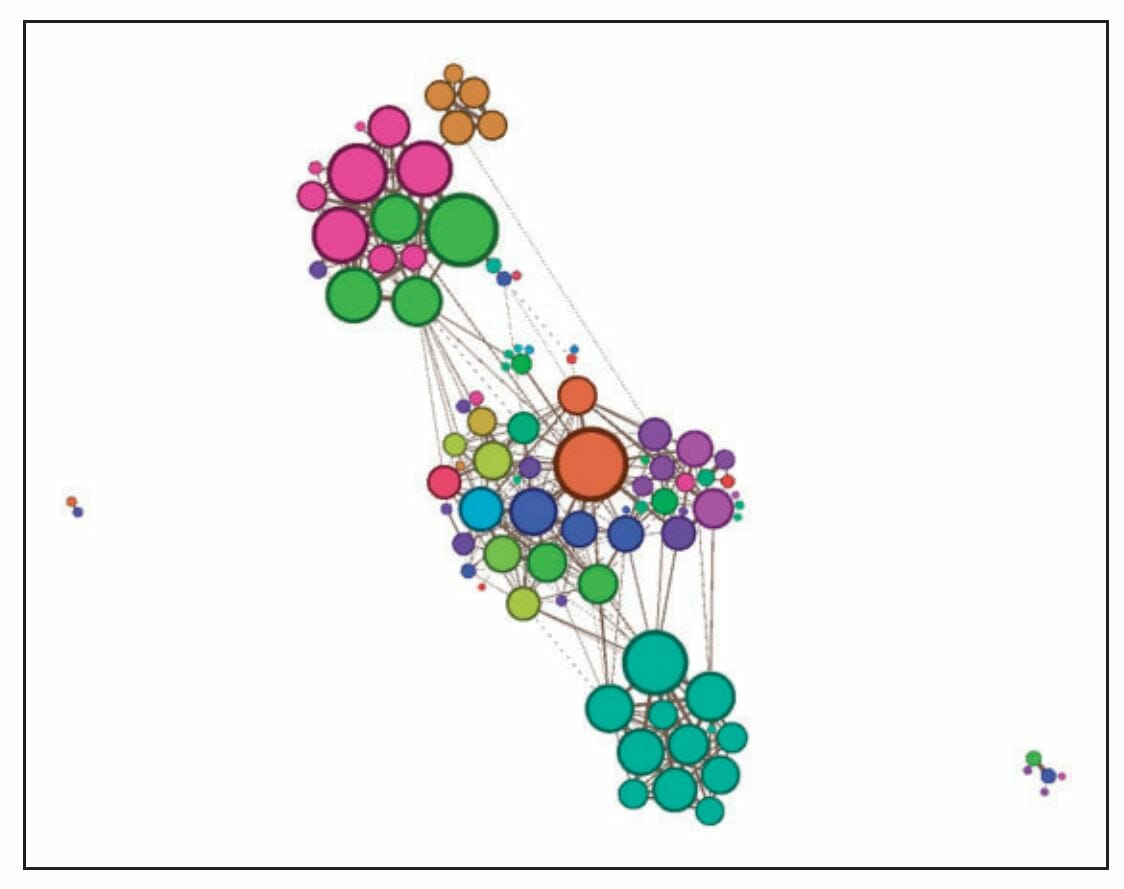 In the scientific article, the six researchers from the Department of Sociology and Anthropology Department map out different types of formation at the party. The circles show the people who have been less than 2 metres from each other. The colours show the fields of study.
image: Blok et al. (2017)

You could, for example, test Durkheim’s idea of ‘collective effervescence’, that is the special sense of community that occurs during religious or national rituals, demonstrations or sporting events. And the integration of the two approaches to the research is important, says Morten Axel Pedersen:

“In the article, we are testing potential ways which make it possible to quantify the social atmospheres. But we also show that quantification of social data is never enough in itself. You have to compare it with some observational data grounded in ethnographic or other qualitative methods like My Madsen’s data.”

Take a master’s in big data

The method can also be used to optimize a knowledge-based workplace, so that more people get good ideas and a better working environment. According to Morten Axel Pedersen it has to be done in an ethical and legally defensible way, to improve people’s social relations and welfare. And not just to get people to work faster, or exact control over them in other ways, the professor emphasises.

The physicist might have extremely refined ways to reap big data and create statistics, but it is at least as important to know the social science theories, and to have the analytical skills to explain the relationships.

The methods, the theories, and the interdisciplinary collaborations have already become institutionalised in the Copenhagen Centre for Social Data Science (SODAS), which is an interdisciplinary research centre located at the Faculty of Social Sciences. The same centre is to play a crucial role in the development of the new master’s degree programme ‘Social Data Science’ which begins to train new students in 2020, according to Morten Axel Pedersen.

The new study programme has huge promise and prospects of job opportunities, according to the professor. Because the social sciences are needed to determine how you code algorithms to handle big data, and later to analyse the data, says Morten Axel Pedersen:

“The physicist might have extremely refined ways to reap big data and create statistics, but it is at least as important to know the social science theories, to have the analytical skills to explain the relationships, and to be able to evaluate the wider social, economic, and political consequences of social big data. At SODAS and on the new programme, we want to combine the best of both worlds”.

Maybe the new big data graduates will find the formula for the good party?