They select different degree programmes: Are women and men born with different interests? 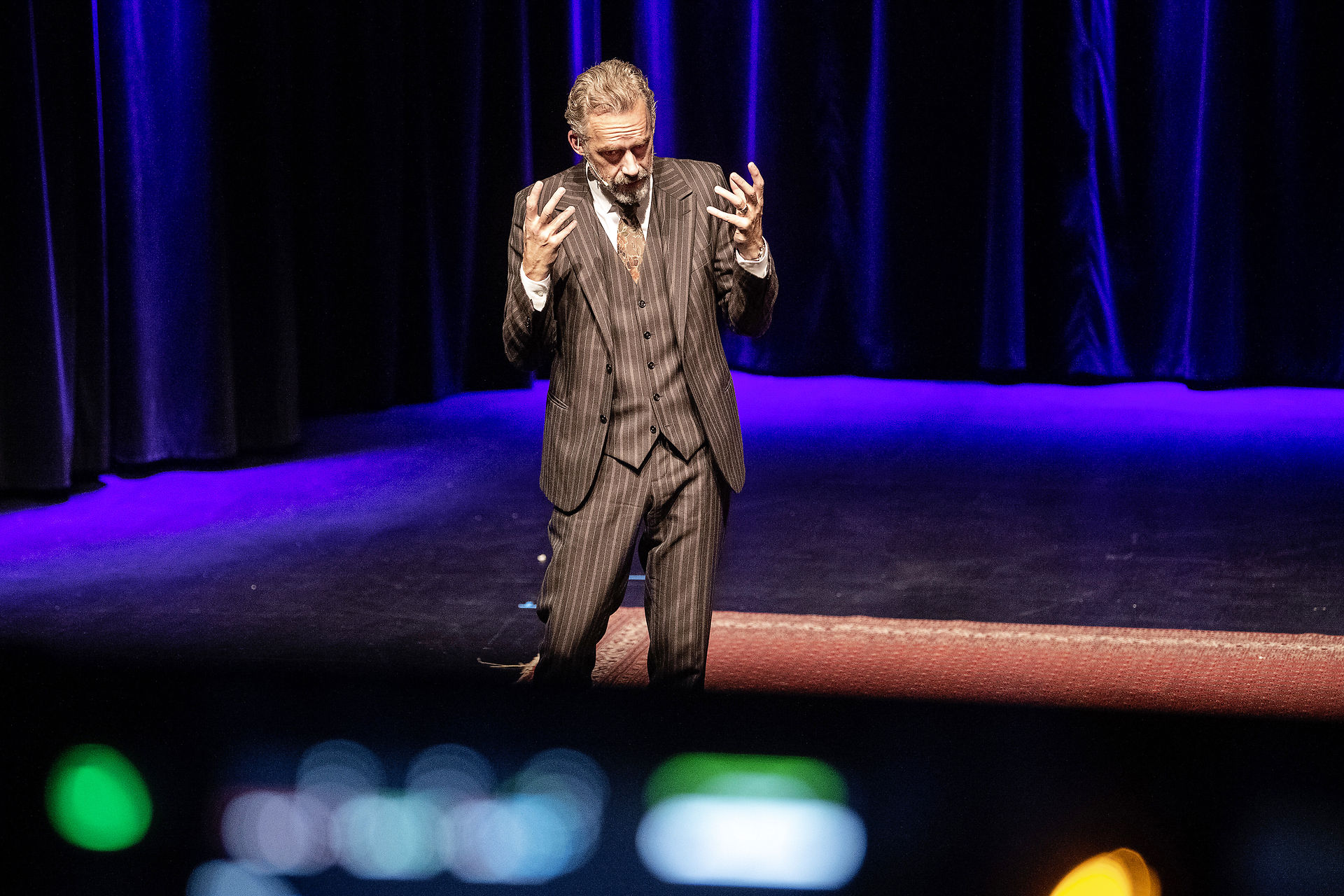 In 2018, the Canadian psychologist and thinker Jordan Peterson published his self-help book '12 Rules for Life: An Antidote to Chaos', which shot up to the top of the bestseller lists, afforded him cult status on YouTube and sent him out on a world tour. Here he is speaking to a sold-out Bremen theatre in Copenhagen.
image: Nils Meilvang/Ritzau Scanpix

Gender — A controversial theory claims that women in progressive and wealthy countries like Denmark opt out of IT, mathematics and engineering because they, by nature, are less interested in these subjects than men are. But a Danish professor in the field of cognitive neuroscience says that the research does not support this conclusion.

The interviewer has not even completed the question before Jordan Peterson pounces up and responds with these words.

The interviewer has mentioned something that the Canadian psychologist has spent much of his public intellectual career fighting against: The growing perception that reality is socially constructed.

Everything is not relative. People are different, according to Peterson. Not just because of nurture, socialisation and cultural influence, no, people are born different, biologically speaking.

READ ALSO: Gender numbers lopsided and skewed in Danish higher education. This is a big issue

It is here in the interview from the Aspen Ideas Festival in 2019 that Peterson refers to the phenomenon that, according to the psychologist, illustrates the Gender Equality Paradox. In short: With more gender equality in society, fewer women will, relatively speaking, study .

If you accept the theory, it may be part of the explanation for the fact that men and women cluster together in different higher education degree programmes in Denmark. At the University of Copenhagen, 207 out of 250 new students of computer science are men, while 171 out of 192 students are women in veterinary medicine. And these are just two out of a wide range of examples.

When Peterson refers to the Gender Equality Paradox, it is mainly due to the researchers Gijsbert Stoet from the University of Essex and David C. Geary from the University of Missouri, who in 2018 made the point that gender imbalances in STEM subjects were highest in countries with high levels of gender equality, for example in Scandinavia. These countries are also wealthy, and where young people are therefore presumably able to choose degree programmes with their hearts without thinking about the financial consequences. Women, in other words, are not forced to choose traditional male subjects in Scandinavia.

Stoet and Geary’s conclusion was that men and women choose differently when they have freedom of choice because there are biological differences in their interests. This is, according to the two researchers, the Gender Equality Paradox.

The question is: Is this true?

According to Christian Gerlach, professor of cognitive neuroscience at the University of Southern Denmark, the answer is a bit disappointing. As it is actually impossible to say with certainty whether it is biological or social conditions that get men to apply for, say, IT and engineering subjects, and women to choose, say, subjects in the healthcare sector.

This is mostly due to the fact that it is hard to carry out experiments that clearly delineate cause and effect. You can’t just change the gender of your subjects, turn men into women and so on, and then find out what effect it has.

»We can’t control all the variables, which means that it is extremely difficult to find causality. It turns into guesswork when you have to say whether one factor or another is decisive. This is the fundamental problem.«

We don’t believe that there is a gender equality paradox.

Sarah Richardson, Professor in the History of Science, Harvard

Gerlach is sceptical about the robust interpretations made by Jordan Peterson and the authors of the article.

He is particularly sceptical of the explanations that point to biology as a decisive factor behind the genders’ different interests.

»It has been incredibly difficult to associate complex patterns of thinking and acting to biological things like hormones,« says Christian Gerlach.

»I myself have a background in the biological part of psychology, so I should be open to the fact that you can explain a lot of these differences biologically. But I don’t personally think so. I think it has more to do with socialisation.«

Difference between Jude and Judith

He says that we affect each other in subtle ways and he mentions an experiment:

A baby sits on a carpet in a laboratory with several different toys in front of it. The researcher invites a test subject into the laboratory and asks the person to keep an eye on the baby while the researcher goes outside the door.

The researcher indicates each time whether it is a boy or a girl, and this is precisely what turns out to be decisive for the experiment.

It turns into guesswork when you have to say whether one factor or another is decisive.

Conclusion: There’s a difference between being named Jude and Judith.

»When you ask the subjects afterwards, it is clear that they have not done it consciously. It is an example of how this works slightly outside our field of attention,« says Christian Gerlach.

You can also find studies that support the opposite hypothesis, however. Researchers have, in a couple of experiments, showed that monkeys also prefer the toys that many humans would connect with their gender. Male apes, for example, choose to play with cars rather than dolls.

One of the researchers behind the first experiment, Gerianne Alexander, said to New Scientist that you should be careful about over-interpreting the results. But she added:

»It is probable that there is a biological tendency, that is then amplified by society.«

Criticism of the gender equality paradox

Studies like these are easy to criticise – and it is difficult, if not impossible, to gain any certainty from them.

The question is whether the same goes for Stoet and Gearys study of the so-called Gender Equality Paradox.

READ ALSO: Psychologist: Enrolment numbers are a wake up call for young men

The researchers faced a backlash after Harvard Professor Sarah Richardson and colleagues decided to examine the report and found many dubious calculations in the study.

Just because there is a biological cause behind something does not mean that we should organise our society after it.

On their blog, they enumerated a number of methodological problems and stated that they had not been able to reproduce the results of Stoet and Geary.

After the criticism, Stoet and Geary had to author a new version of their article in which they corrected errors and elaborated on their methodological choices, but they stood by their conclusion.

In an email to Buzzfeed, Stoet explained that the problem with the criticism is that »the critics cannot explain the phenomenon we have described«.

Richardson and her colleagues subsequently maintained that the researchers based their calculations on a measure for women’s ‘tendency’ to get a STEM education that does not hold. To Buzzfeed she said: »This appears to be a case of massaging one’s data … to produce the narrative that you want to see«.

She rejected the claim that the large fluctuations in STEM-educated women between countries can be explained in one simple causal relation:

»In the end, we do not think that there is a gender equality paradox.«

According to neuropsychologist Christian Gerlach, this is not likely to be a deliberate distortion. But generally speaking, researchers – and everyone else – tend to emphasise details that confirm their own assumptions about the world. That’s what you call confirmation bias.

And this is a challenge you have to take seriously when it comes to research into gender differences.

»When we are in an area where it is difficult to conduct experiments, this becomes fertile ground for a selective approach. I don’t think anyone is trying to distort things, it’s just a tendency that we end up doing it.«

He interprets the research to mean that biological conditions may play a role, but generally speaking the theory of socialisation is stronger.

But he also asks the question: What does it actually mean if the causes are biological or social? Basically, it’s all about what society we want, according to Gerlach – and not what is »natural«.

Earlier in history, it was, for example, advantageous to be born aggressive because it increased your chances of surviving. Today, this is hardly an excuse that you can use to justify yourself if you punch a random passer-by on the street.

»Just because there is a biological cause for something does not mean that we should organise our society after it.«

»We can say the same in the field of education. Even though there is a slight biological bias that favours one over the other, you could consider it important that we have equal gender representation in all subject areas. Here we enter the realm of politics, where you have to decide whether you think this should be an objective in itself.«