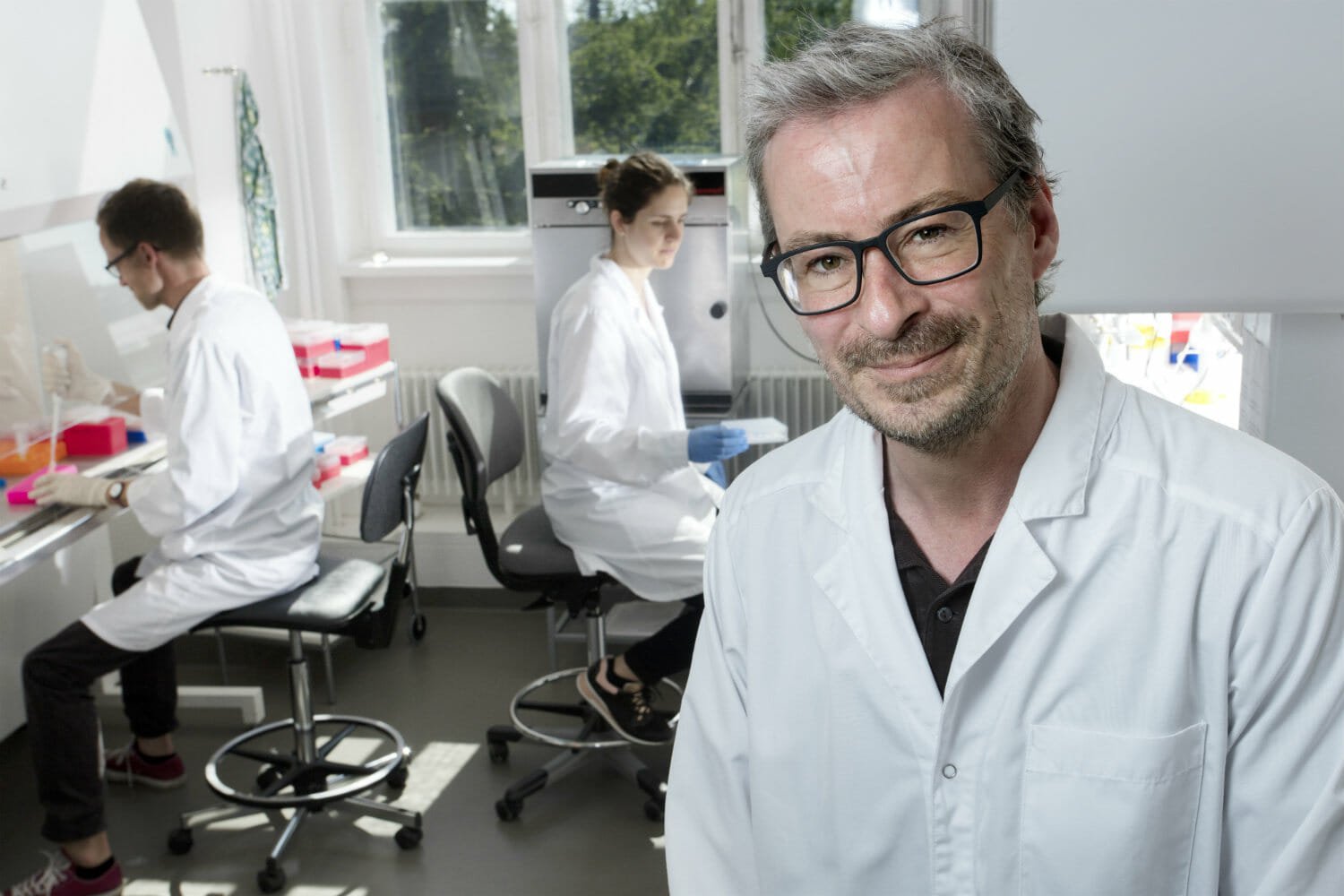 Uncertainty — The merger between the Department of Biology and Natural History Museum of Denmark has developed into »an intolerable situation«. This is according to head of the Department of Biology Niels Kroer in a newsletter. The trouble is that a couple of the museum's highest profile researchers – the professors Eske Willerslev and Tom Gilbert – seem to be looking for a new home for their research. Maybe at the Faculty of Health and Medical Sciences.

It was a discouraging message which department head Niels Kroer could share with employees at the Department of Biology on 11th March.

The message was a status update on the merger of his own department and the Natural History Museum of Denmark (SNM). The merger had been announced in November 2018 to howls of protest from staff at both departments.

»The old adage ‘no news is good news’, cannot, unfortunately, be applied to the merger process,« Kroer wrote in the internal newsletter BIOUpdate.

»The fact is that there is still uncertainty about the merger process due to a failure to clarify what the future connection of the research sections from the former SNM will be.«

Later in the newsletter he says the situation is »intolerable«.

They, and three other successful researchers – the geologist Minik Rosing, the biologist Carsten Rahbek and the cosmochemist Martin Bizzarro – aired their dissatisfaction with the prospect of a merger of the Natural History Museum of Denmark and the Department of Biology in November. A merger that would disconnect their research sections from the museum and move them into the Department of Biology.

»I find it incredibly sad and a great loss to Danish research … I find it difficult to see how interdisciplinary, top international, research can continue in the new constellation,« Eske Willerslev said to the news site Politiken at the time.

Now Willerslev and Tom Gilbert have, by all accounts, both set out in search of a new home for their research sections at another faculty. In BIOUpdate Niels Kroer writes that the researchers are currently in negotiations to move their centres from the Faculty of Science to the Faculty of Health and Medical Sciences.

»Negotiations are [taking place] for a transfer of the Section for GeoGenetics and the Section for Evolutionary Genomics to the Faculty of Health and Medical Sciences. It is currently unclear where these negotiations will end up,« the department head writes in a newsletter dated 25th February.

A month later, on the 25th March, he adds in a new newsletter that the Department of Biology has sent budget statements from 2019 to 2022 »as a basis for Dean of the Faculty of Health and Medical Sciences (Ulla Wewer, ed.) ‘s decision making«.

No clarification from management

It is still an open question what will happen to the merger if Willerslev and Gilbert slam the door on the Faculty of Science.

The University Post has asked Niels Kroer to elaborate on what the plan is, if Eske Willerslev and Tom Gilbert leave. He answers briefly that the department will consider it, »when we know what’s going on«.

»The work on the academic and organisational merger between Biology and the SNM has been put on hold until there is clarification on where the research groups will end up,« he writes.

Dean John Renner Hansen confirms that the negotiations have a direct impact on the merger:

»If one or more of the researchers from SNM move out of the Biology setting, then this will of course change the plan. But it is too early to say anything, before an agreement is in place,« he writes in an e-mail.

The University Post has asked the management at the University of Copenhagen how they see the negotiations between Gilbert, Willerslev and the Faculty of Health and Medical Sciences. It has not been possible to get a comment from Rector Henrik C. Wegener.

»We cannot comment, from the outside, on a group wishing to move from one faculty to another before the case is completed. Various models and their financial aspects are currently being discussed,« writes the deputy director for communication Jasper Steen Winkel in an email response.

The researchers that are looking to find a new home are big-league. Tom Gilbert and Eske Willerslev are both among the most highly cited researchers in the world, and they have often had publications in the reputable scientific journals Nature and Science.

Even outside the research community, many people have heard about Willerslev’s discovery of DNA traces from prehistorical humans, from Greenland to North America. In a Danish context he is known from a series of tv shows entitled ‘The DNA Detective’ on the public service broadcaster DR.

In 2018, the artist Kristian von Hornsleth set up a crowdfunding campaign to build a three-metre high bronze sculpture of Eske Willerslev for the promotion of science.

Their research sections have, apart from the prestige, huge grants – including from the Danish National Research Foundation, which has invested DKK 100 million in Willerslev’s Centre for GeoGenetics alone. Most recently, the company Illumina that does DNA sequencing machines, has entered into a partnership with Willerslev’s centre to explore the evolution of genetic diseases (read more about this in our latest Weekly Intel here). When researchers like Eske Willerslev and Tom Gilbert start looking for new pastures, they draw funding and researchers with them.

It is at the same time expensive for the university to accommodate research sections that have been set up on external funding. This is one of the reasons the Natural History Museum of Denmark (SNM) in recent years has been hit so hard on its finances that it has resulted in layoffs. The strained finances at the museum are one of the reasons behind the museum being slated to merge with the Department of Biology in the first place.

»No grants to researchers at the Faculty of Science are fully financed from private and public foundations. For SNM this has meant that there is a considerable strain on the SNM department’s basic grant, as there, unlike other departments, is no to draw on for, say, salary costs.« the Dean of the Faculty of Science John Renner Hansen explained in November 2018.

In the meantime, employees at the Department of Biology who have been critical of the merger see the research groups’ plans to jump ship as the culmination of a distressing process.

»You go through all this, just to return to something that looks a lot like the starting point. Maybe one or two of the research groups have been transferred, while the others have been atomised and placed in other faculties and departments. Then you have to ask yourself: Has it been worth it?« says Jakob Winther, a professor at the Department of Biology.

This is yet another sign of poor faculty management

»But it will not, however, be the same department, we go back to. Too many bad things have happened for us to just go back and start again. Some decisions have been taken here which no one has been happy with. The final outcome of these decisions could, and may still, end in total disaster. This makes for a lack of confidence in management and in the system. And this is hard to rectify.«

He is supported by John Mundy, professor and a former associate dean at the Faculty of Science:

»This is yet another sign of poor faculty management. Something that many employees have come to expect from the current Dean’s Office,« he writes in an email response.

He recommends that you keep the museum as it was before the merger, and »find a way to finance it«. He calls at the same time for a »replacement of certain management positions«.

Academic employee at the Department of Biology Caspar Elo Christensen criticised management for not involving the employees sufficiently when the merger was presented last year. And he says that there is not much that has changed since then.

»It is sad that you have to go through all this. It reflects the lack of staff involvement and co-determination, that the entire process has been suffering from. The result is that you do not qualify your decisions, and therefore end up making bad decisions, that you have no control over,« he says.

The researchers’ dissatisfaction is directed at management rather than against Eske Willerslev and Tom Gilbert. Jakob Winther will not speculate on the researchers’ motives, but John Mundy says that he doesn’t mind Willerslev moving to the Faculty of Health and Medical Sciences, if the faculty, rector and he himself so desires.

Dean John Renner Hansen states that he would like to see one good reason why the research groups from SNM are trying to move away from the Faculty of Science.

»A lot of excellent research is taking place at the Department of Biology, which is a world class department. It is not clear to me why Biology should not be an excellent venue for researchers from SNM,« he writes in an e-mail.

The University Post would have liked to have asked Professor Eske Willerslev, why he is in negotiation with the Faculty of Health and Medical Sciences, but he writes in a text message that he »has no comments at present«.

The message is the same from Tom Gilbert: This »is something that I, for various reasons, would rather not comment on at this time,« he writes in an e-mail.