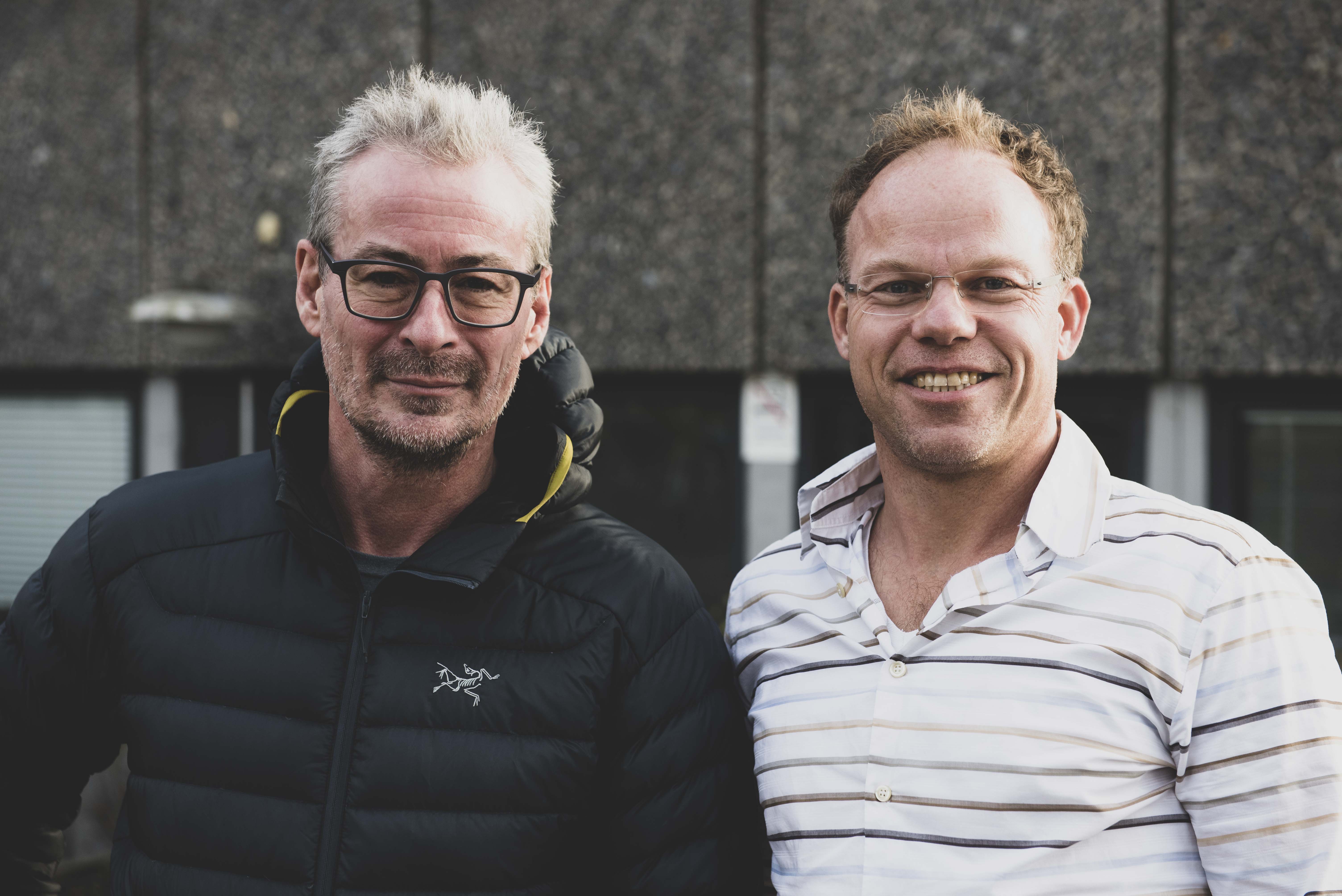 CANDIDATES FOR THE BOARD — Top-down management has had disastrous consequences for the university staff and created several problems for the administration according to Eske Willerslev and Jesper Grodal. Both are running for seats on the board of The University of Copenhagen in an effort to involve researchers in the decision making.

Eske Willerslev and Jesper Grodal are familiar with the platforms of their running mates in the board election, and they are aware that their key issue—involving researchers in decision making at the university—is far from a unique standpoint.

Still, they do not regret naming their party-list ‘Inddrag forskerne!’ (Include the researchers!), a party-list which in addition to Eske Willerslev and Jesper Grodal includes 13 other researchers from across the university (see a list of the candidates at the bottom of the article):

»It may not be to our advantage in a tactical sense, but the fact that this is such a popular issue just goes to show that the concern is real,« says Director of Centre of Excellence GeoGenetics, Professor Eske Willerslev.

He has served on the board for the past four years and has witnessed what he describes as »an increased arrogance of power«. There is a lack of understanding of what is going on out on the campuses among the researchers and students which has let to »ludicrous« decision-making.

There are plenty of examples. Eske Willerslev mentions the attempt to merge Department of Biology with the Natural History Museum of Denmark, the sacking of geologist Hans Thybo, the dismantling of Susan Stripp’s research group, and the current blockade at Faculty of Humanities, a case in which Eske Willerslev supports the students.

Jesper Grodal is a professor of mathematics and is running as second candidate on the party-list. He is also very critical of the administration’s policies. His own Department of Mathematical Sciences has twice survived attempts at merger with other departments even though Mathematical Sciences, according to the professor, has a »strong academic profile« in its own right.

Top-down management has had terrible consequences.

»It feels like the decision-makers don’t know what they’re doing. Nothing is carefully considered,« says Jesper Grodal. »Top-down management has had terrible consequences. The researchers aren’t involved in decision-making, they’re hardly ever consulted, before massive changes are implemented. That’s what we want to address.«

According to the two scientists the poor decision-making at University of Copenhagen has seriously harmed the university’s reputation, and can potentially deter international scientists from coming to Copenhagen.

»If you tell outsiders about how things work here, that staff members are routinely fired, people are shocked,« says Jesper Grodal and mentions the tenure track programme designed to attract talented, young researchers with a promise of steady employment in the future.

»How can you implement a tenure track programme without tenure?« asks Grodal.

One of Eske Willerslev and Jesper Grodal’s central points is to turn the university in the direction of other top universities, for instance Oxford, Stanford, and Cambridge all of whom Eske Willerslev is affiliated with.

According to the two, researchers and educators have more influence on policy decisions are not dictated from the top of the universities administrations.

»Our party-list consists of 15 researchers from across University of Copenhagen, and no matter who is voted on the board, we will use our extensive networks to provide the administration with much needed challenge in the decision-making process,« says Jesper Grodal.

»If you want to make your voice heard on the board, it’s a great advantage to be able to explain how similar cases are dealt with in the rest of the world,« adds Eske Willerslev.

But has Eske Willerslev been able to take advantage of his knowledge during his previous tenure on the board?

According to the professor, the departing board, of which he was a part, has succeeded on a number of matters including securing co-determination as a part of the university strategy. However, the problem is that »the administration hasn’t acted on it«.

»We need the board to be more visible and vocal in dealing with individual cases.«

This is exactly what the board did in the case of the failed merger between Department of Biology and the Natural History Museum of Denmark, where Eske Willerslev conducted research.

The case ended with several prominent research centres, including Willerslev’s own, breaking away from Faculty of Science and moving to Faculty of Health and Medical Sciences. Following this conclusion of events, the board admitted that the staff at Department of Biology had not been adequately involved in the decision-making process.

Jesper Grodal agrees that the board’s admission was correct:

»The board isn’t there to micromanage the everyday operation at the university, but it obviously has to step in when the rules aren’t being followed, and it’s also there to set out a course.«

The only tool is a sledgehammer

Eske Willerslev says that he is often shocked by how little the external members of the board actually know about the world of academia.

This has made the work on the board unnecessarily arduous at times, he admits. But he is adamant that he will »fight on« and adds that it is important to have members on the board who have served before and are familiar with the work, especially when the board will see a lot of newcomers.

At the same time, he encourages the research community to take a more vocal stand in the debate:

»If we don’t see a change in the management style from the administration, I hope the researchers will speak up, just like we’re seeing the Humanities-students doing right now. I know that’s an extreme measure, and I am only speaking for myself,« he says and looks to Jesper Grodal.

»But I have to say that what is happening right now is destructive for the quality of the research and education, for the entire organization. Something must be done, even if it means that professors have to stage a protest on Vor Frue Plads,« says Eske Willerslev.

The only tool applied has been a sledgehammer.

In defence of the administration, couldn’t the argument be made that they have had to make some tough decisions in light of the cutback-measures the university has faced?

»The two-percent cutbacks have definitely forced the organization to adapt, I will admit that much,« says Eske Willerslev.

»But the main issue is how the whole process is handled. Decisions have real-world consequences. No one has paid any attention to the researchers and students who have to deal with these consequences. The only tool applied has been a sledgehammer.«

»The department head is busy serving the dean, the dean is busy serving the rector… they are all focused on their superiors. That’s the problem.« Jesper Grodal says that the party-list’s policy platform addresses key issues and seeks to set out a course for the university with more co-determination.

»The problem is that the administration has lost sight of what is important,« he says. »All decisions must take two things into consideration at all times: research and education«.

Involve the researchers! Who are we?

Jesper Grodal got his PhD in mathematics from MIT in 2000, and spend 2000-2006 at Univ. Chicago, IAS-Princeton, and Paris, before starting a professorship in mathematics at UCPH in 2006. He has also subsequently held visiting positions in France, Germany, UK, and US.  His main passion is his job, and he was proud to be named fellow of the American Mathematical Society in 2018 “for contributions to algebraic topology, representation theory and their interactions, and for service to the profession”. During the last 13 years,  he has also been involved in building up a strong activity in his research area at University of Copenhagen, aided by a number of external grants, e.g, from EU and DNRF, and been involved in department administration in various ways. He lives on Østerbro, with his wife and 3 daughters aged 10, 8, and 4. His wife is also a professor in the math department, and he has grown up “on UCPH”, as his parents were also both professors here (his mom in economics, and his dad in film studies).  When he don’t work or tend to the kids, he tries to do some sports. Ideally kitesurfing, but if wind, swell, or time does not allow,  he’ll settle for a swim or a run.

Pia Quist holds a 2006 PhD in Sociolinguistics, and is associate professor at the Department of Nordic Studies and Linguistics. Her research is in sociolinguistics, e.g., dialects and multilingualism.

Randi Starrfelt holds a 2008 PhD in Psychology, and is professor with special responsibilities at the Department of Psychology. Her research is in neuropsychology, e.g., faceblindness.

Mikael Rask Madsen holds a 2005 Doctorate in Sociology of Law from École des Hautes Études en Sciences Sociales, Paris, and is a professor of law and director of iCourts. His research is focused on globalization and the role of legal institutions and professionals in these processes.

Nanna MacAulay holds a 2002 PhD in Medicine and is a professor at the Department of Neuroscience. Her research area is within molecular neuroscience.

Michael Broberg Palmgren holds a 1990 PhD in Plant Biochemistry from University of Lund. He is a professor at Department of Plant and Environmental Sciences, and studies biological pumps found in plants.

Claus Thustrup Kreiner holds a 1998 PhD in Economics, and is professor at the Department of Economics, and director of the research center CEBI. His main research area is Public Economics.

Dorte Sindbjerg Martinsen holds a 2004 PhD from the European University Institute in Florence. She is professor at Department of Political Science. Her research focuses in particular on EU integration of welfare policies.

Janus Mortensen holds a 2011 PhD in Linguistics. He is Associate Professor at the Centre for Internationalisation and Parallel Language Use. His research includes social and linguistic norms and language policy.

Thomas Mears Werge has a degree in Biochemistry and Molecular Biology from 1988.  He is professor at the Department of Clinical Medicine. His research focuses on explaining the biological reasons for mental disorders.

Stine Helene Falsig Pedersen holds a 1998 PhD in Biology. She is a professor at the Department of Biology, and her research is in Cell Biology and Physiology.

Timo Minssen holds a 2012 Jur.Dr. from University of Lund. He is professor and director of the research center CeBIL. His main focus of research is in legal aspects of biomedical innovation and public health.

Hans Wandall holds a 2004 PhD in Medicine. He is professor at the Department of Cellular and Molecular Medicine. His research area is in Glycomics.