The good life out on South Campus 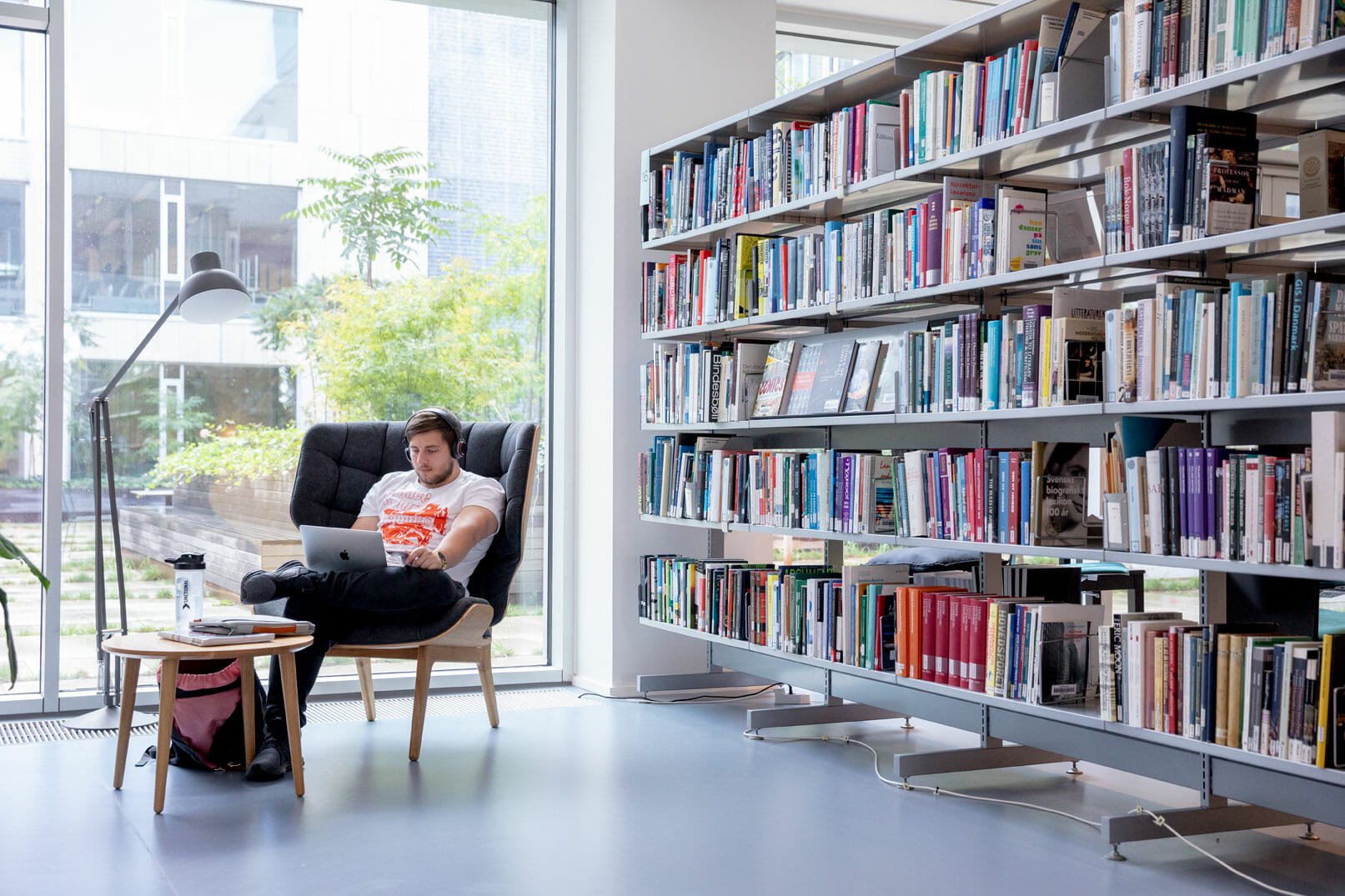 Reading room in the library at the Department of Information Studies
image: Carsten Seidel

The verdict — In January 2017, theologians, lawyers and information studies moved to South Campus. Before the move, people voiced their protests and concerns. We went out there to give it a once over.

It is 18 months since the last University of Copenhagen (UCPH) students left the inner city.

People voiced plenty of concerns before the move actually took place. Law professors protested in a letter to the newspaper Berlingske and described the move with phrases like “bonkers”. Students of theology feared losing the sense of community that was in their Købmagergade inner city lair. Even after the move, there have been critical voices. The University Post received letters from students and staff, who could not find any spaces for peace and quiet behind KUA3’s transparent glass walls.

But what now? We went out to KUA3 to see how the staff and students have settled in. The first reaction is quite positive:

“It’s been fantastic,” says study programme and career guidance counsellor Karen Riskær Jørgensen. “On a down-to-earth level, I was almost exhilarated by the fact that there were toilets everywhere. And that it’s open. And that there are electricity outlets. And that the windows don’t let in the draft. It is a modern workplace for people in the 21st century.”

We start in the Atrium, where the law programme is the focal point. Students sit around and talk on the central wood panelled giant stairway or immerse themselves in the numerous study spaces, which – in two storeys – encircle the room. It looks like a streamlined architect’s drawing. The acoustics are also impressive.

“The large atrium does something really special,” says Karen Riskær Jørgensen, who used to have an office in the Studiegården off Studiestræde street. “All the employees who do not have any contact with students, they can see the students now. This has had a real unifying effect.” 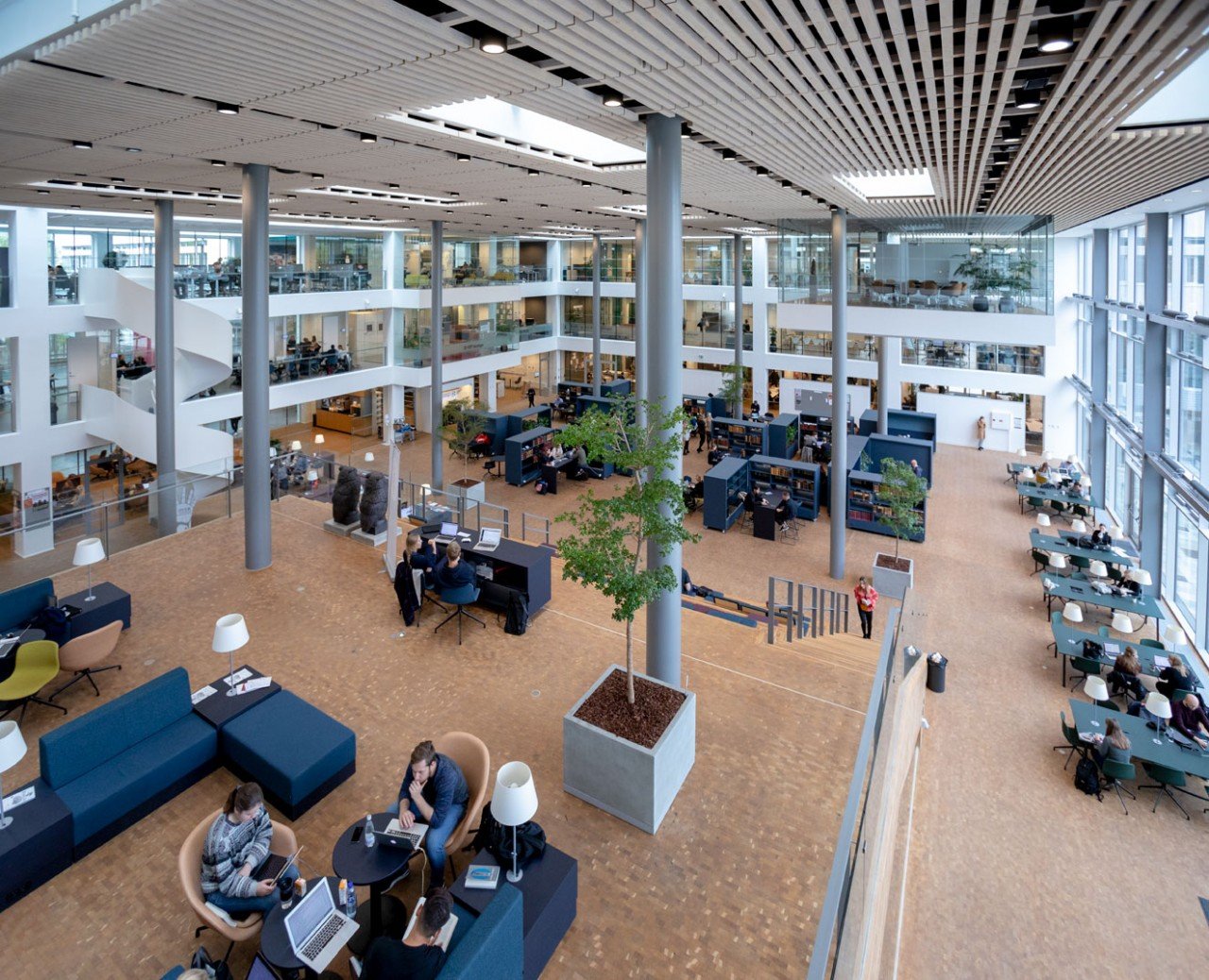 The ATRIUM - The large focal point at the Faculty of Law contains hundreds of reading and study spaces for students writing their thesis. In the upper right corner there is a glass box that hangs in space. This is where the Dean and the Academic Council hold their meetings.
image: Carsten Seidel 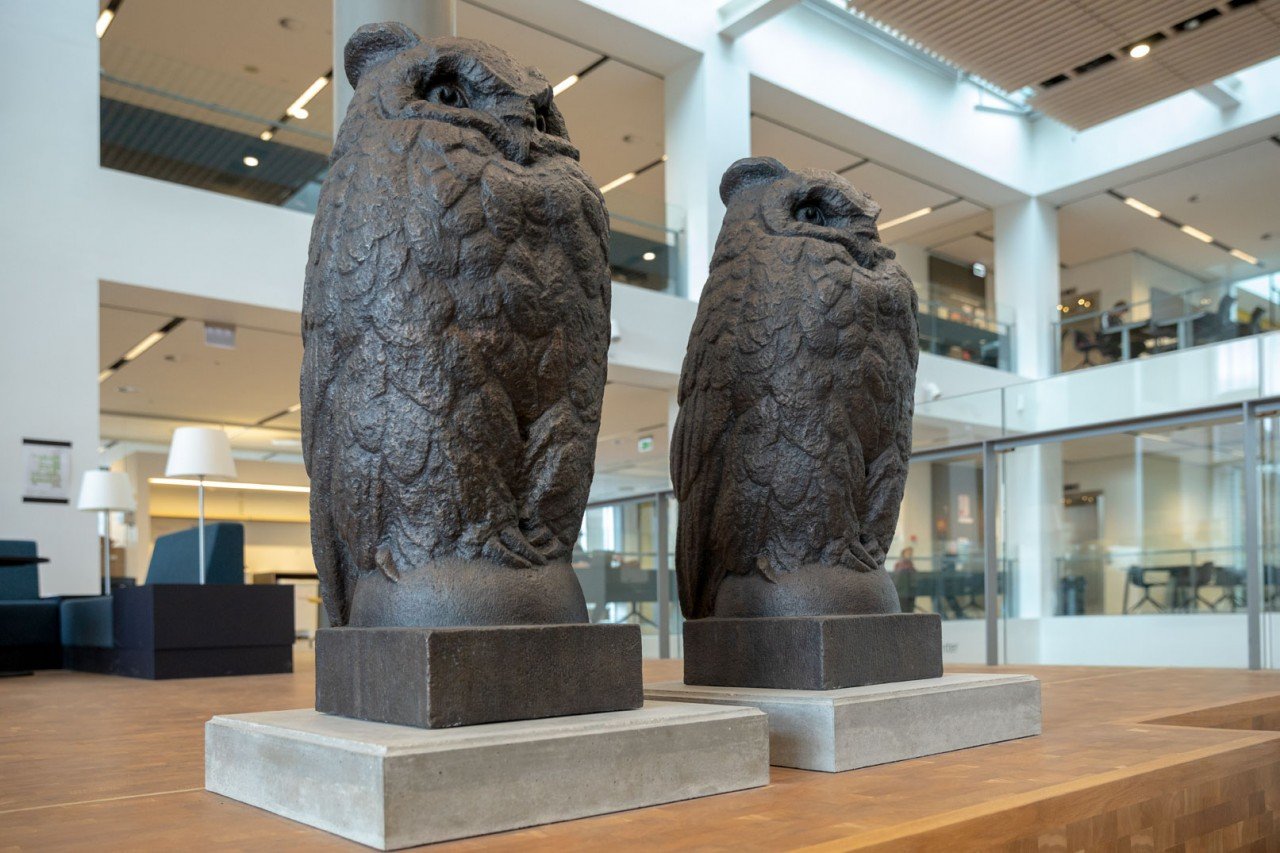 The OWLS - On top of the grand staircase in the atrium are two large owls. They are casts of a similar set in front of the vacated premises in Studiegården that the Faculty could not take with them because the old building is on a protected buildings list.
image: Carsten Seidel

Over the phone, Professor Ditlev Tamm – the man behind the featured comment in Berlingske – expressed something akin to enthusiasm about, or at least acceptance of, the new buildings.

“The building itself is cleverly designed by good architects, who have got the most out of the assignment. They cannot create a city centre out in the Amager district, make a new house look like an old house, and turn the new Njalsgade into our old Nørregade address. In particular, the entrance and the atrium are nice. But the offices are more boring than those in the city.”

He still believes that a law study programme belongs in the city’s historic centre.

“But it is much better environment for the students, and the faculty is more closely tied together.”

Law student Rebecca Ingemann Madsen takes us up to ParaKaffen, the student-run café at Law which she has helped to start up. Out towards the café, there are three newly refurbished conference rooms that could easily be in a fancy communications agency. All are designed in collaboration with student associations from the study programme. The money for the project comes from the university. 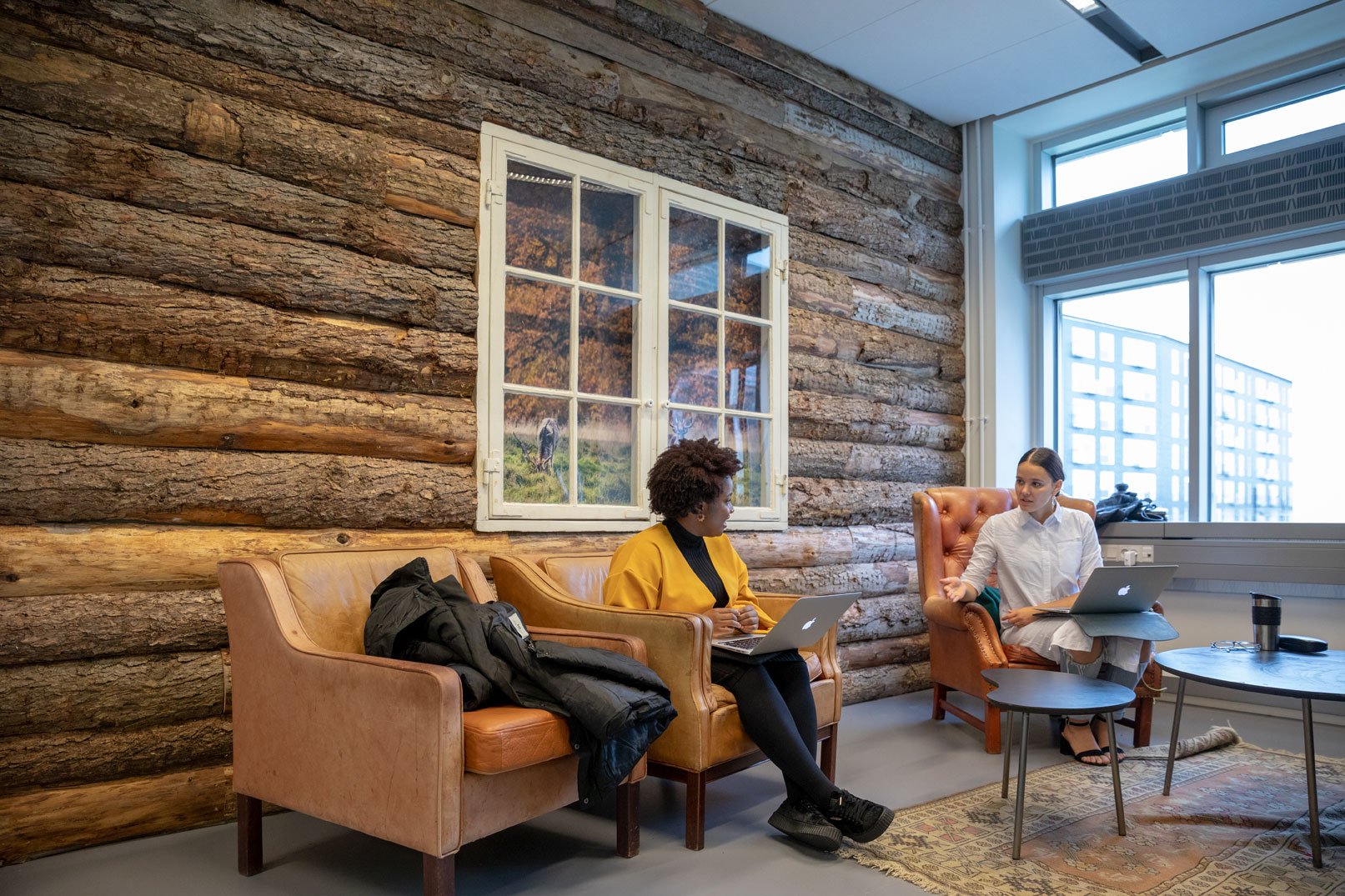 Jagtstuen - A group of law students has sought refuge in a cosy room which has been decorated in cooperation with the so-called Law Hunting and Shooting Association.
image: Carsten Seidel

“Every time we asked for something, the university said yes,” says Rebecca, who has nothing but praise for project manager Thomas Haaning Christiansen, who was in charge of the Faculty’s relocation (and who was also named administrative staffer of the year at UCPH in 2018). 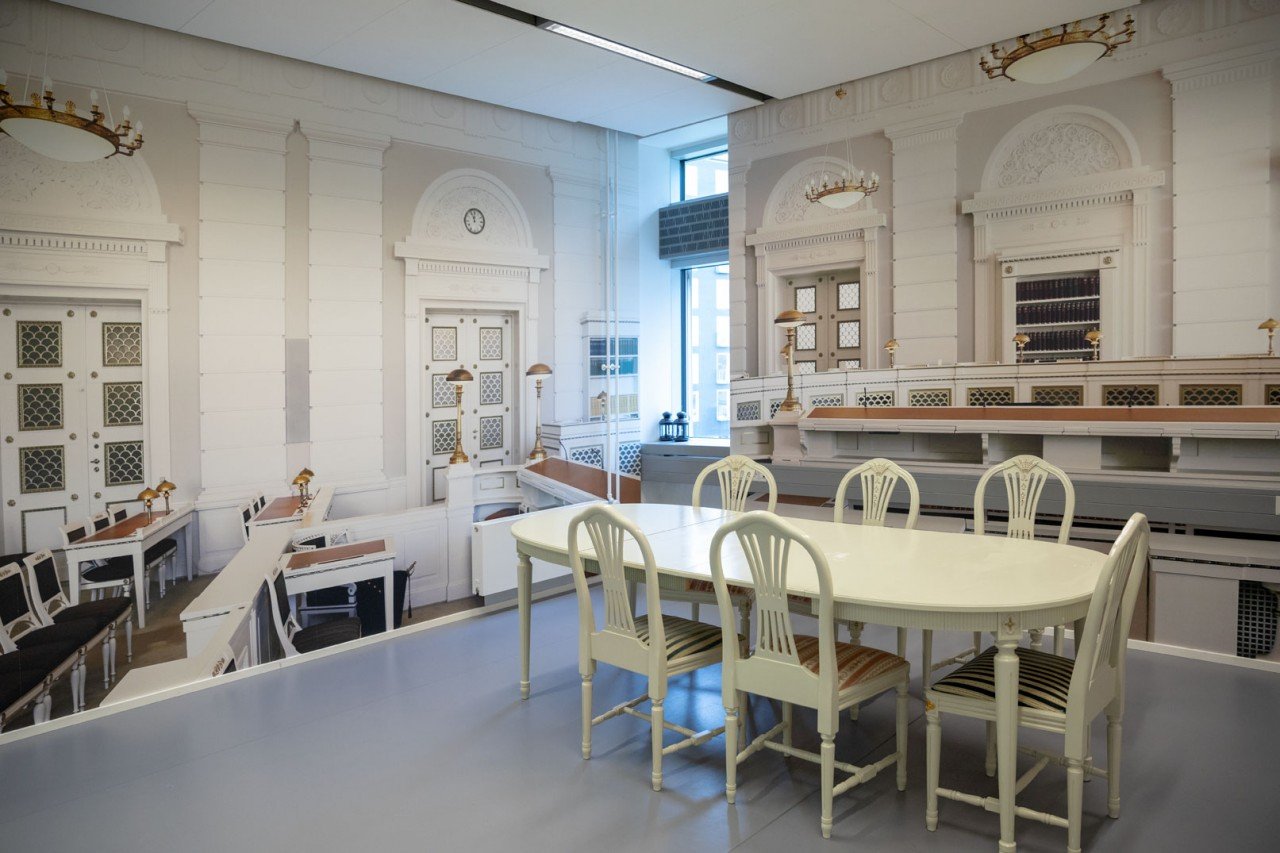 The Supreme Court - Another group room at the Faculty of Law. The walls are clad with photostats of the interior of the real Supreme Court room.
image: Carsten Seidel 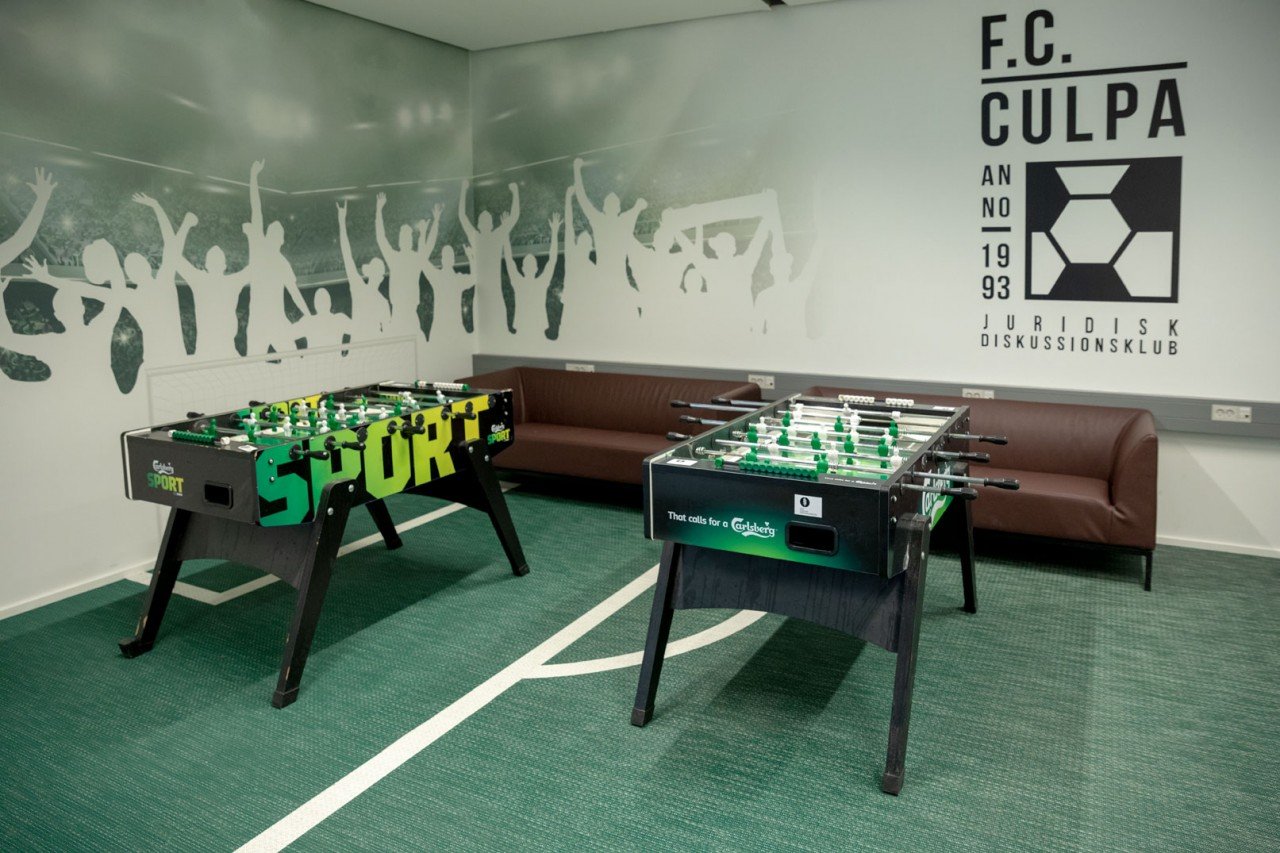 Table football - Next to the Supreme Court, students can play table football. The room with a grass turf carpet has been decorated in cooperation with the Faculty of Law soccer team FC Culpa. BENCH NOSTALGIA - At the end of the wall in the table football room is a bench which the students have been allowed to take with them from the old Annex A in the Studiegården. 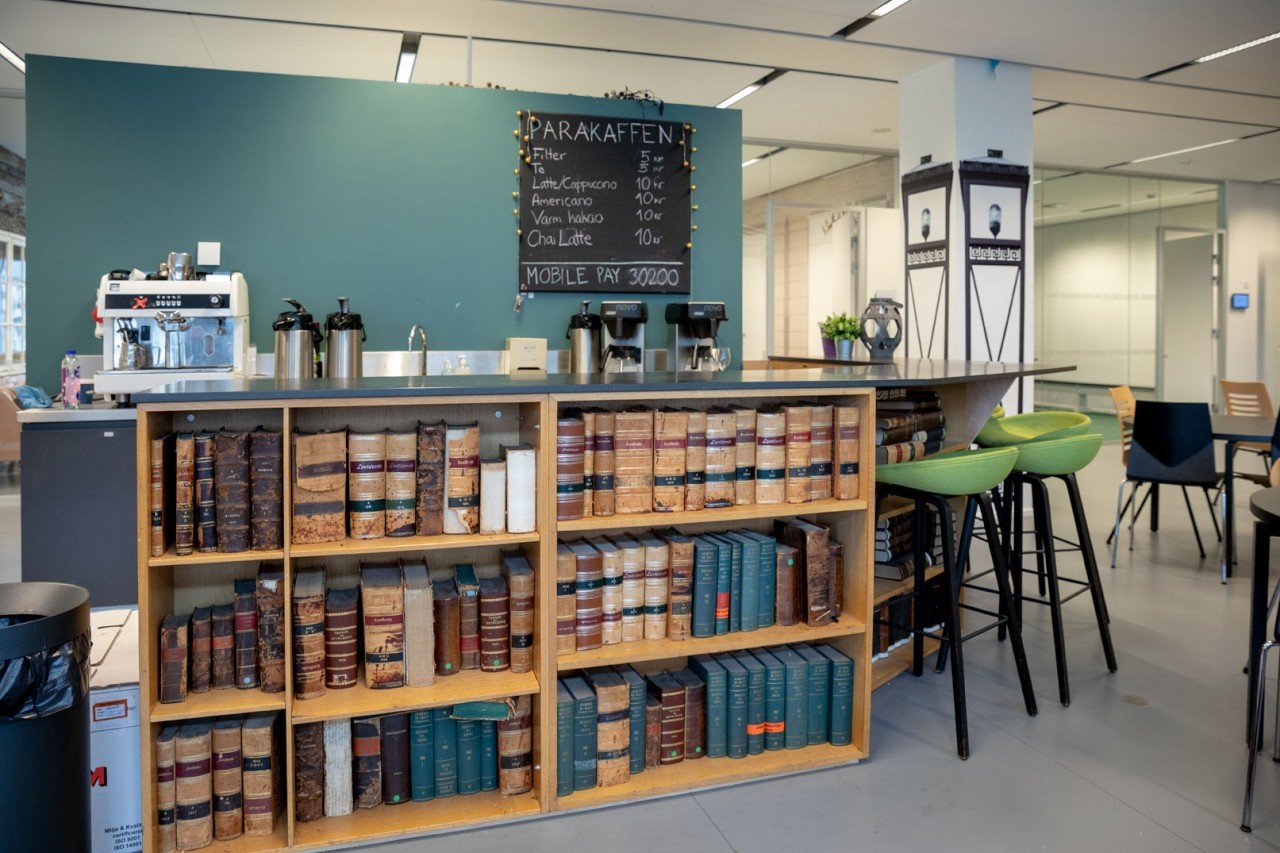 On the ground floor, the Faculty of Law’s Friday bar has finally got enough space in a new, large, Faculty of Law canteen. For the first year, they had to drag refrigerators and other bar equipment back and forth when partying. But a newly-built bar has solved the problem.

If Rebecca has to find something to criticise, it is that the Faculty’s researchers are hidden away on corridors at some distance from the students. “It’s as if they have not yet dared to expose them to having students drop by and knock on their doors,” she says.

This is a problem they don’t have at the Faculty of Theology. It was a requirement from staff and students, that the layout of the rooms should mix offices, classrooms and reading spaces, so you could spontaneously meet up with people just like in the old premises on Købmagergade.

In Teobar we met Elisabeth Mouritzen and Camilla Kristensen, that are tallying up what’s left of the booze after the introduction trip. The bar is in the Theology canteen, and while the room is suitable for big parties, the committee struggles to recreate the atmosphere of their old basement bar in the inner city on the nights that are less busy. On these days they move into the Tabernaklet ‘the tabernacle’, a more intimate, more domestic room.

Teobar - Here they take stock of the booze stash after the introduction trip. The bar room is located right next to the canteen. The set-up is well suited for large parties, but on less busy nights Teobar moves into a small room.
image: Dennis Christiansen

Some students have a hard time coming to terms with the smoking regulations, which are upheld more strictly here at the Campus of Sinners (which the theologians call their new home). And then there’s the lack of books – which comes from the fact that the Faculty has partly sold off, partly put its huge book collection into storage. All in all, there are more people that still long for the old Theology lair, but Elisabeth and Camilla don’t buy into the Købmagergade nostalgia.

“You miss the library, but apart from that, the setting is clearly better out here,” says Elisabeth Mouritzen.

While we sit here, people come straggling in from all directions and gather around a piano at the other end of the canteen. It is the autumn morning song, while the wind rustles outside, and for a moment everything at Theology comes to a standstill. IMMERSION - The theologians’ considerable book collection has been spread out over the entire faculty. There is less room for books here than in Købmagergade. Some of it is in the basement, and some of its has been sold or given away. 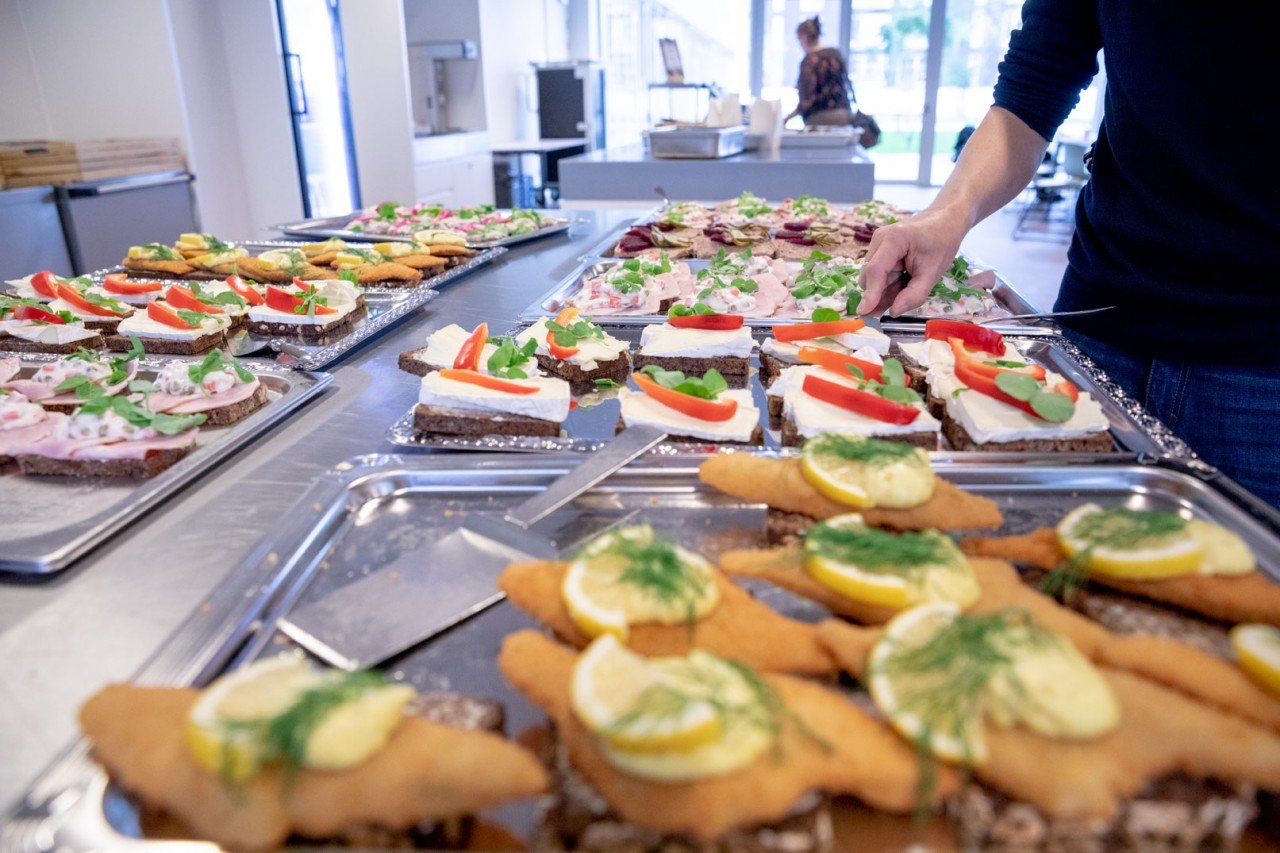 LUNCH - The theologians’ canteen serves open sandwiches. You have to be quick off the mark, as the trays may already have been emptied by 12, says a law student, who prefers to take her lunch here.
image: Carsten Seidel

Stag all lit up

The Hjorten, the ‘Stag’, is all lit up when we pass by.

The Friday bar for the students at the Department of Information Studies is centrally located on the ground floor, close to the law canteen. We look in, and are immediately castigated by two girls behind the bar. We had forgotten to mention the Hjorten in our guide to Friday bars. But then we are given a warm welcome.

At the Department of Information Studies, you can feel small when your neighbour is the massive Law study programme. “There is the fitness room in the basement, but you can only get in with a Law student card,” one of the girls says. (In fact, law students are not allowed to use the small exercise room, which is reserved for Law employees, ed.). But they are happy with the move. Both in terms of the new building and their neighbours. Before the Department was on its own, hidden away and forgotten on Birketinget street, just off the Urbanplanen project. “Now we have become a part of UCPH.”

It is the two girls from Hjorten that make us aware of the fact that – when you find the glass corridor on the second floor – you can take a stroll from KUA3 to KUA2 and from there all the way down to the end of KUA1. 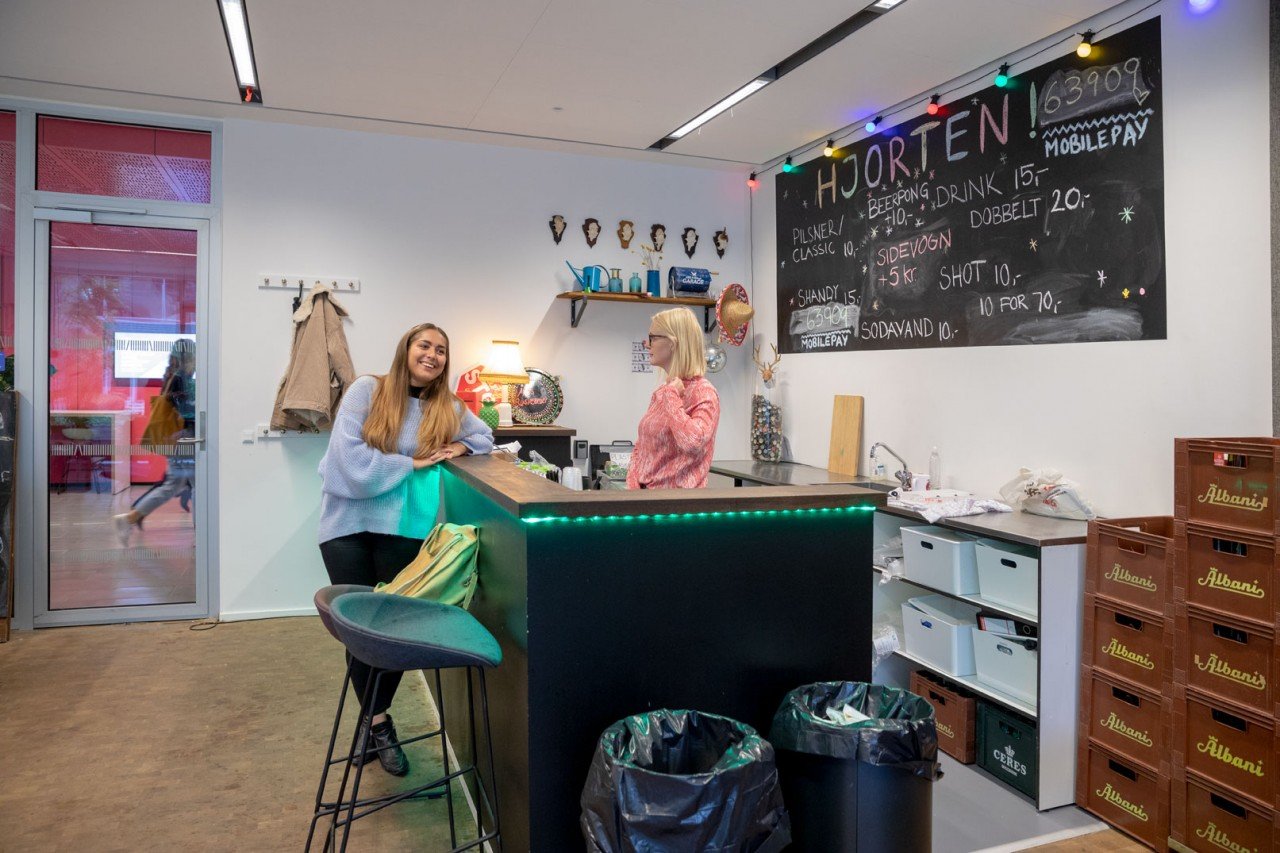 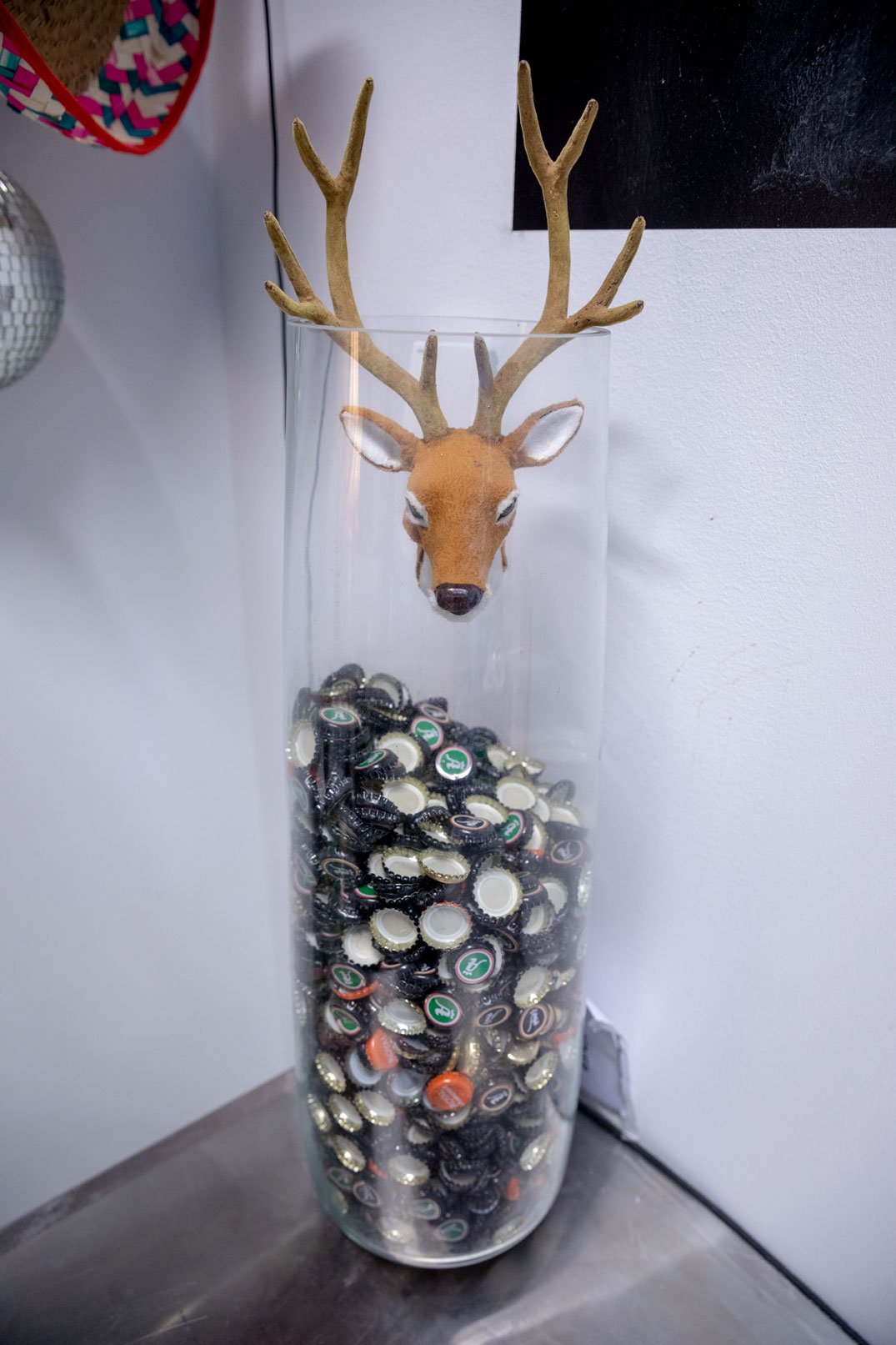 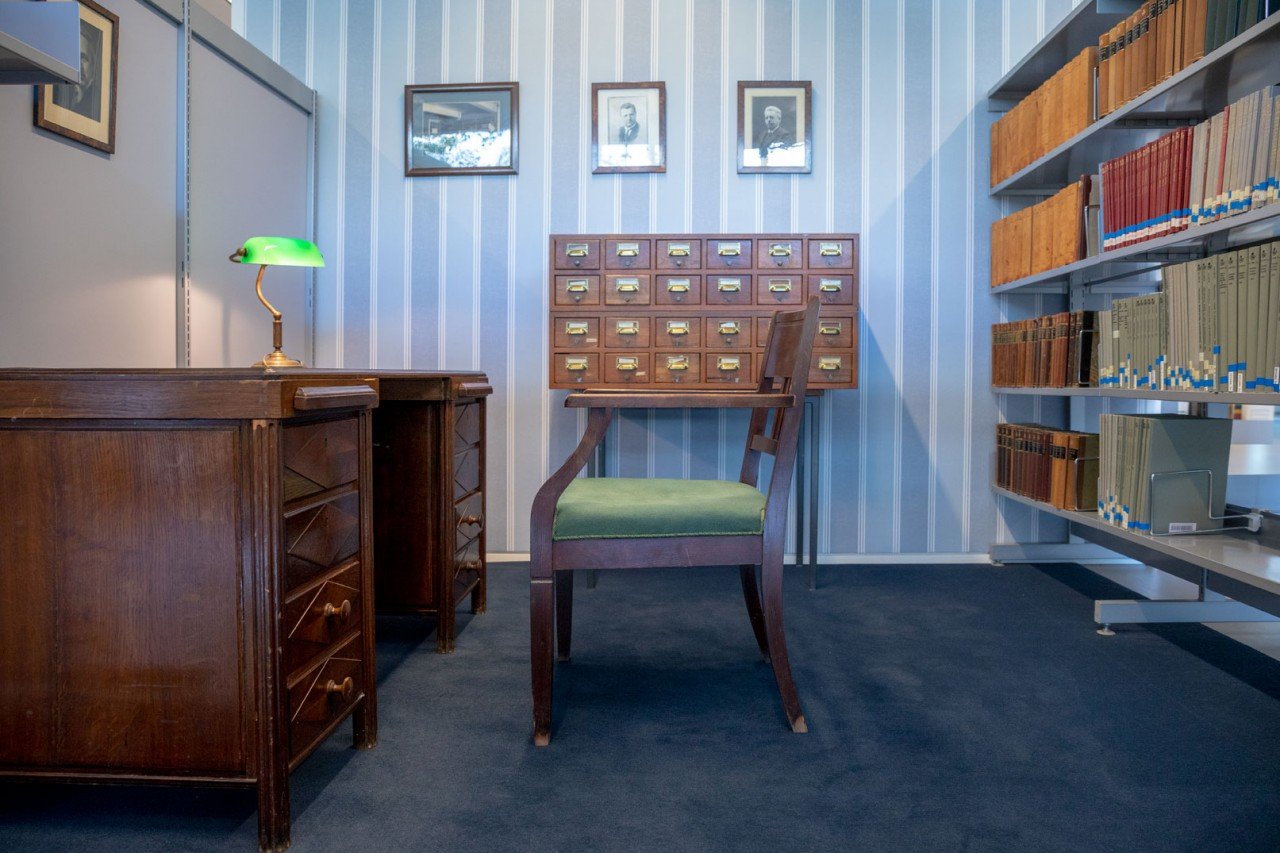 READING PERMITTED - - You need to know it is there to be able to find it. The library at Information Studies hides this fantastic reading space. A sign on the table ensures you that it is perfectly OK to sit here and study.
image: Carsten Seidel

If statues could talk

At lunchtime, the students teem in to the long lobby connecting Theology with Law and Information Studies. On the architects’ drawings it was called the Læringsgaden or ‘learning street’, but the students have renamed it Studiestræde as a reference to their old home in Copenhagen’s old central district.

The buildings change when they are lived in. They get scratches, which tells stories about the parties, the relocations, the unauthorised posters, the accidents, the wear and tear, the lived studying and working life.

And then there are the stories that only the walls can retell. Like that of the Søren Kierkegaard-bust at Theology, which at the beginning of the autumn semester in 2017 suddenly disappeared. There was a huge outcry. It is a quite heavy bust, not one that you can just sneak into a bag.

After a few days, Kierkegaard was back. Someone knows where Kierkegaard has been. Karen Riskær Jørgensen, who shared the anecdote with us, has no idea.

“If only statues could talk,” she says. 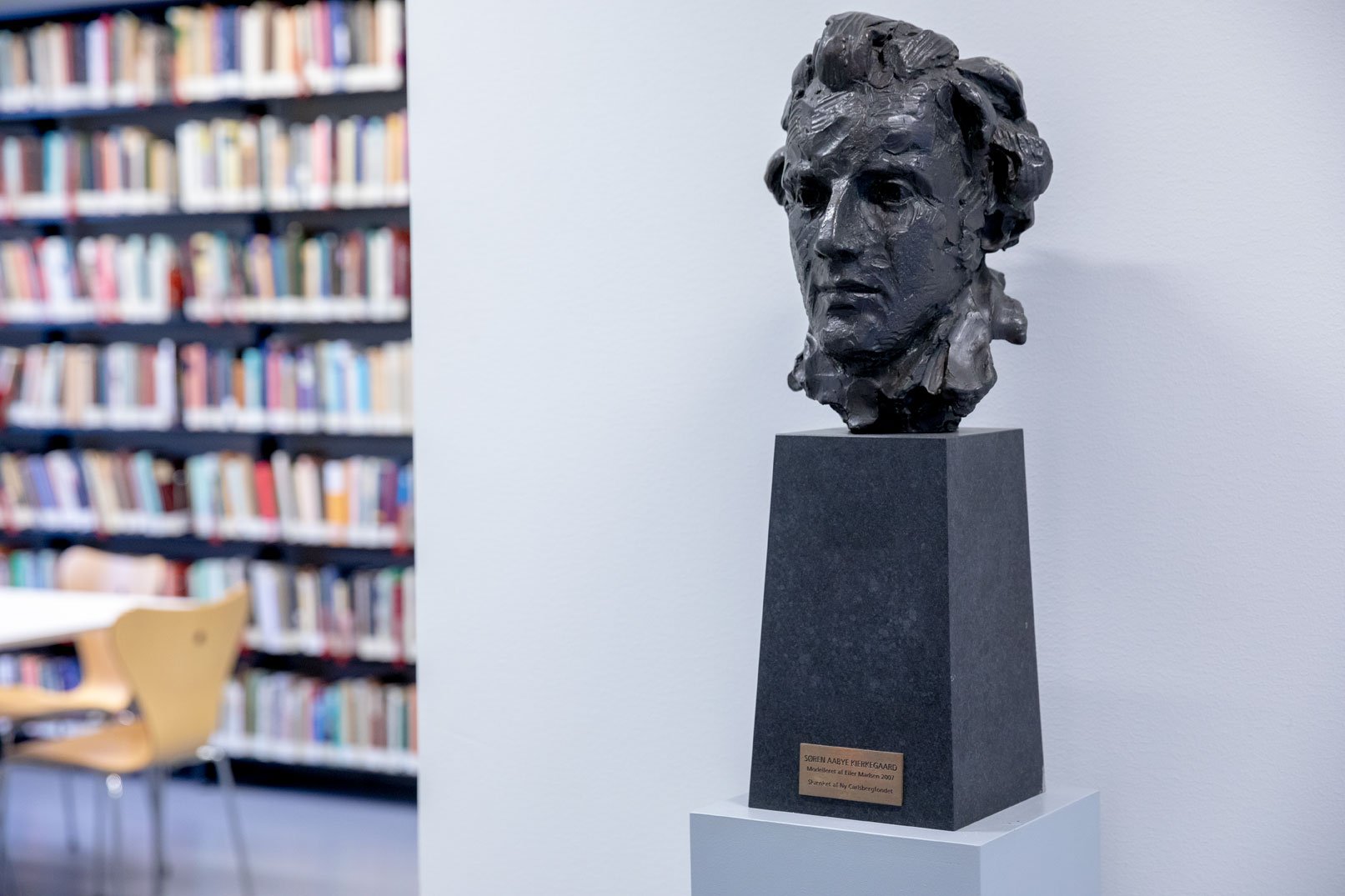 The man - Theology’s Kierkegaard bust. At the start of the semester in 2017, the philosopher disappeared for a couple of days. Rumor has it that history students had nicked it - and that the Theology people sought revenge by relieving them of a picture at the Café Helga.
image: Carsten Seidel 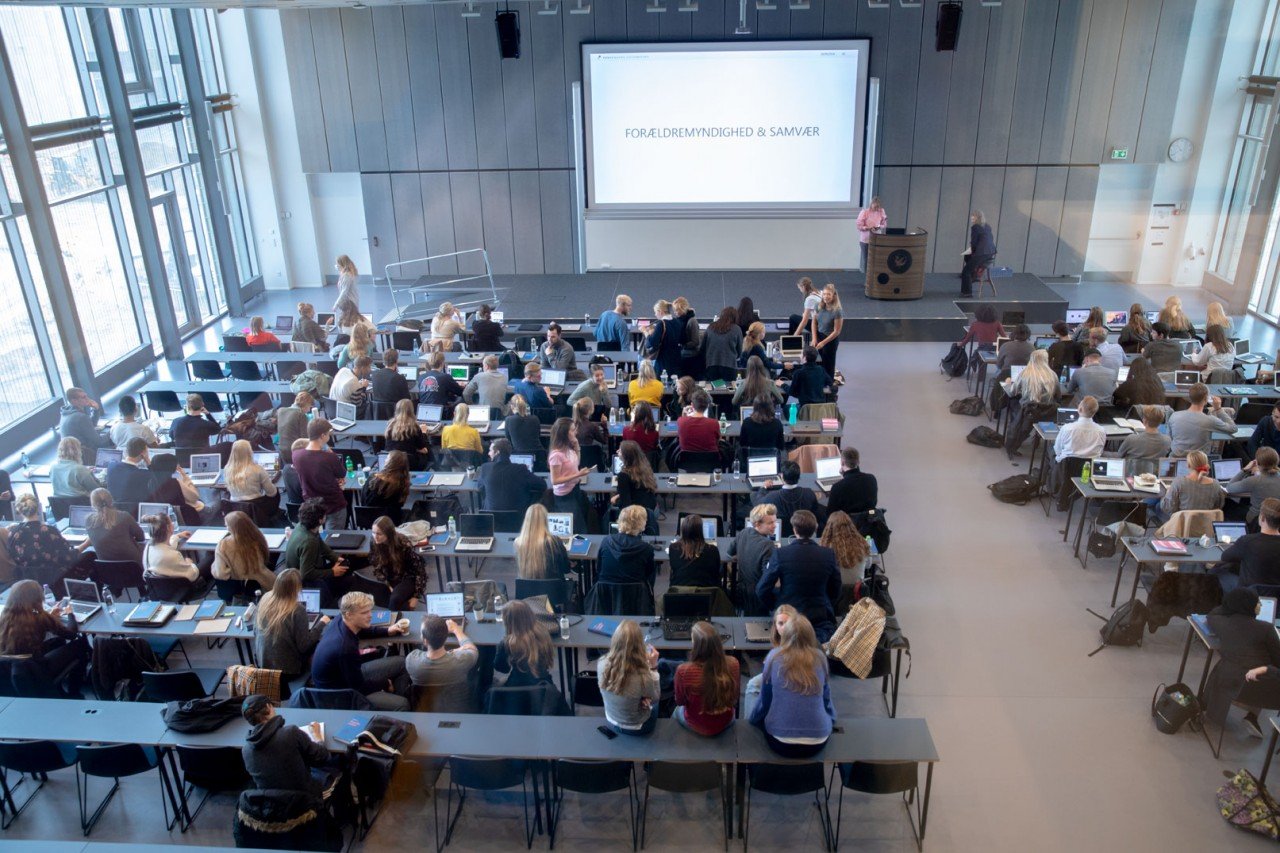 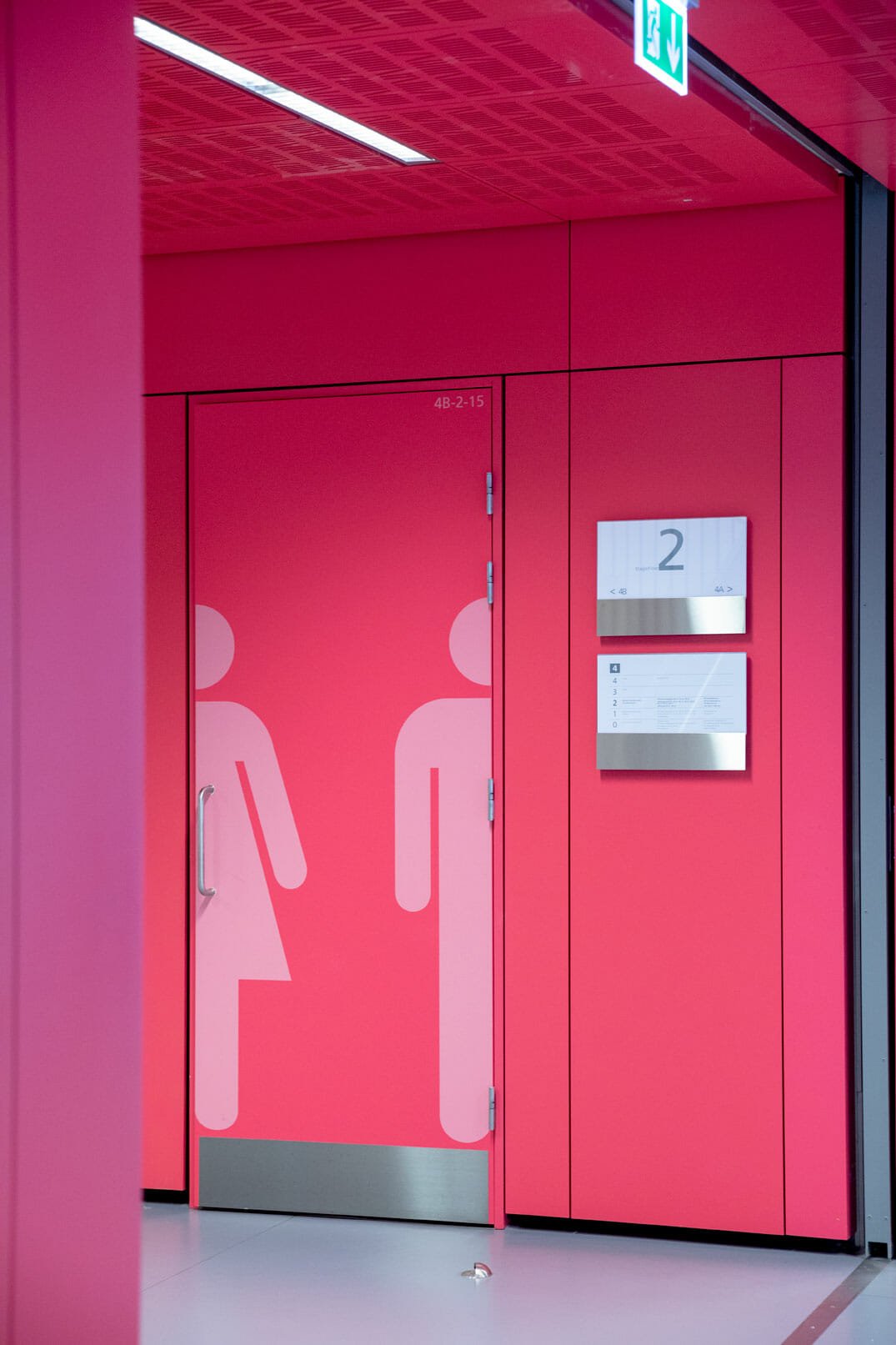 KUA WC - Yes, there are a lot of toilets at KUA3. And yes, this is a significant improvement for several of the employees who have moved to South Campus from the inner city.
image: Carsten Seidel 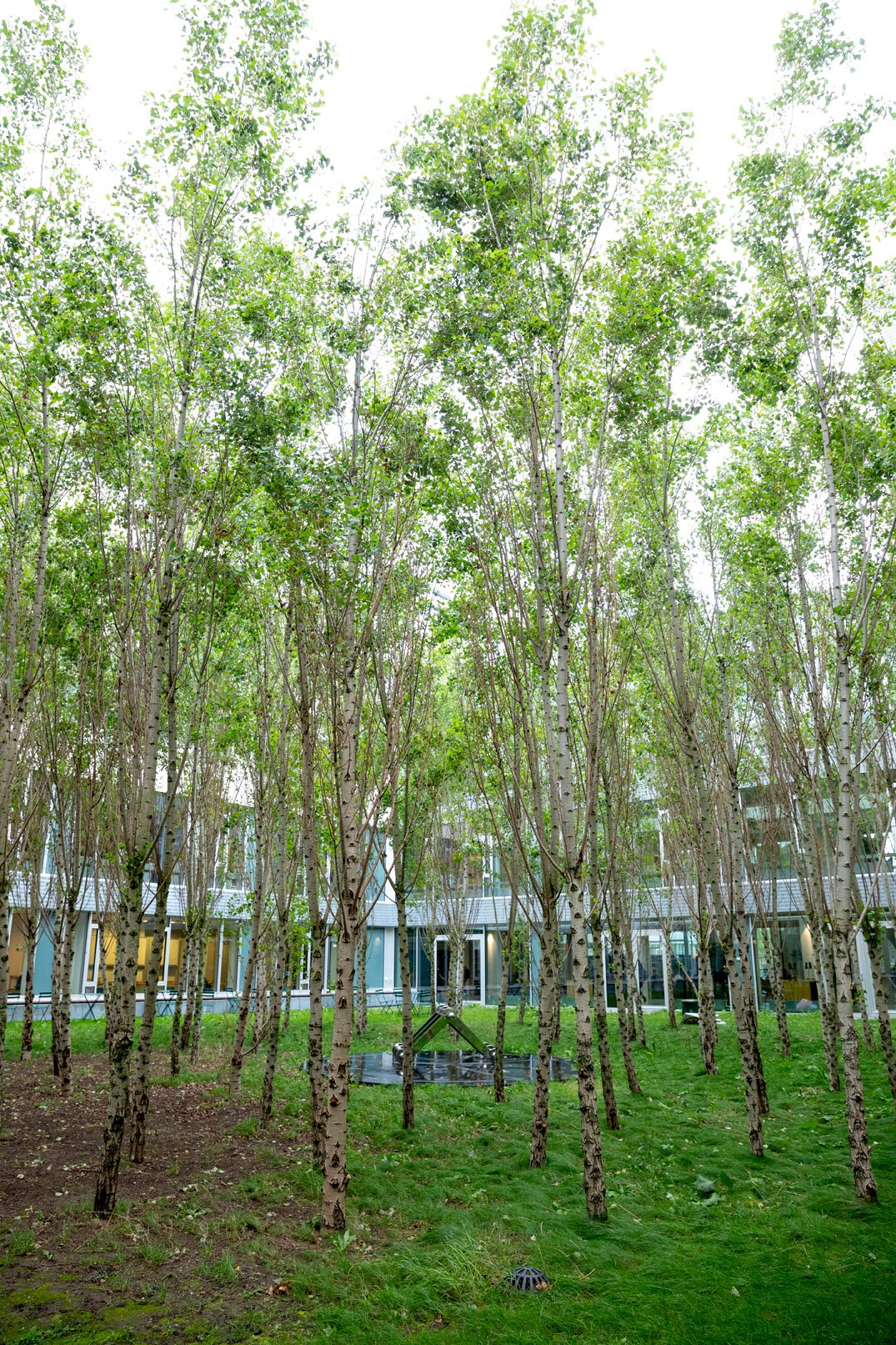 No smoking - Perhaps the most beautiful new courtyard. Smoking is prohibited, so if you need a smoke you need to find somewhere to take a break.
image: Carsten Seidel 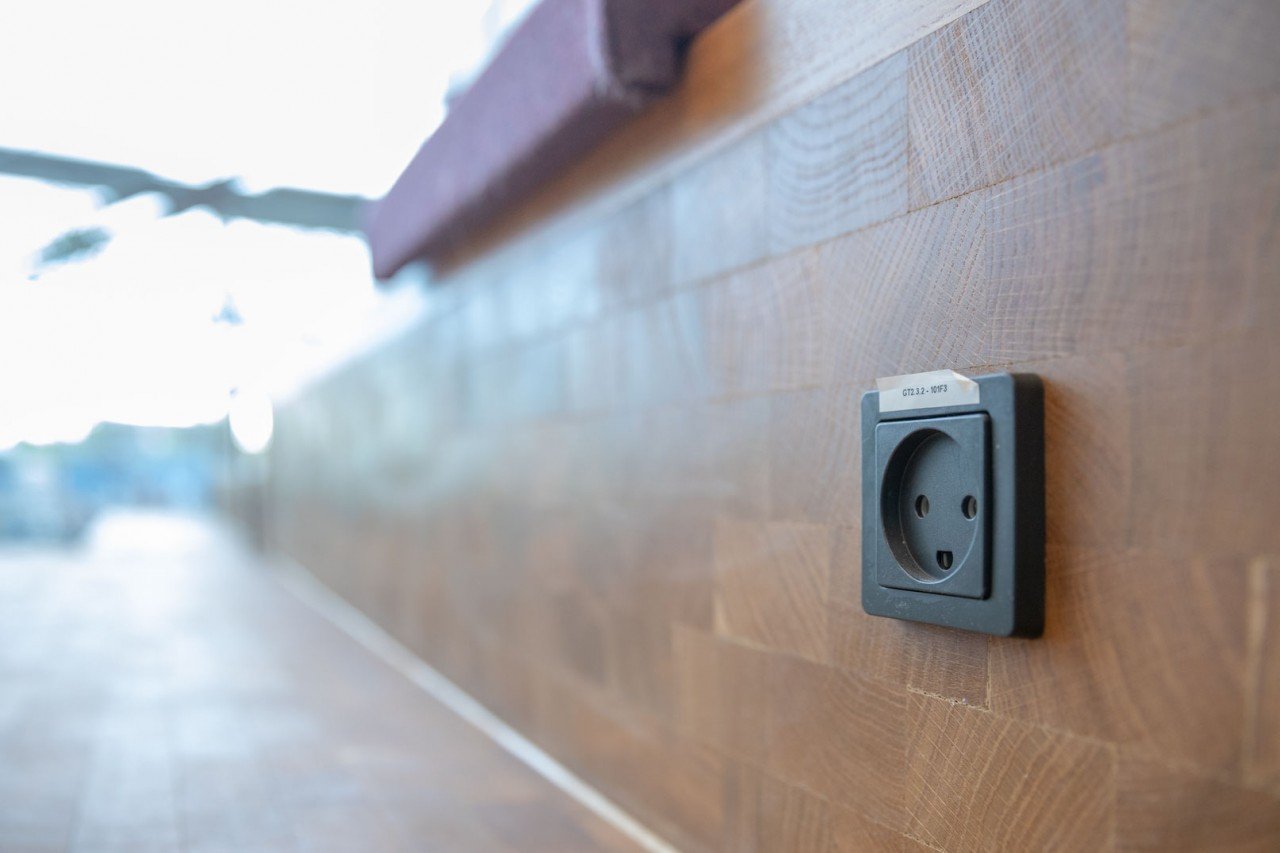 Sockets - Based on experience from KUA1 and 2 they put power outlets EVERYwhere.
image: Carsten Seidel 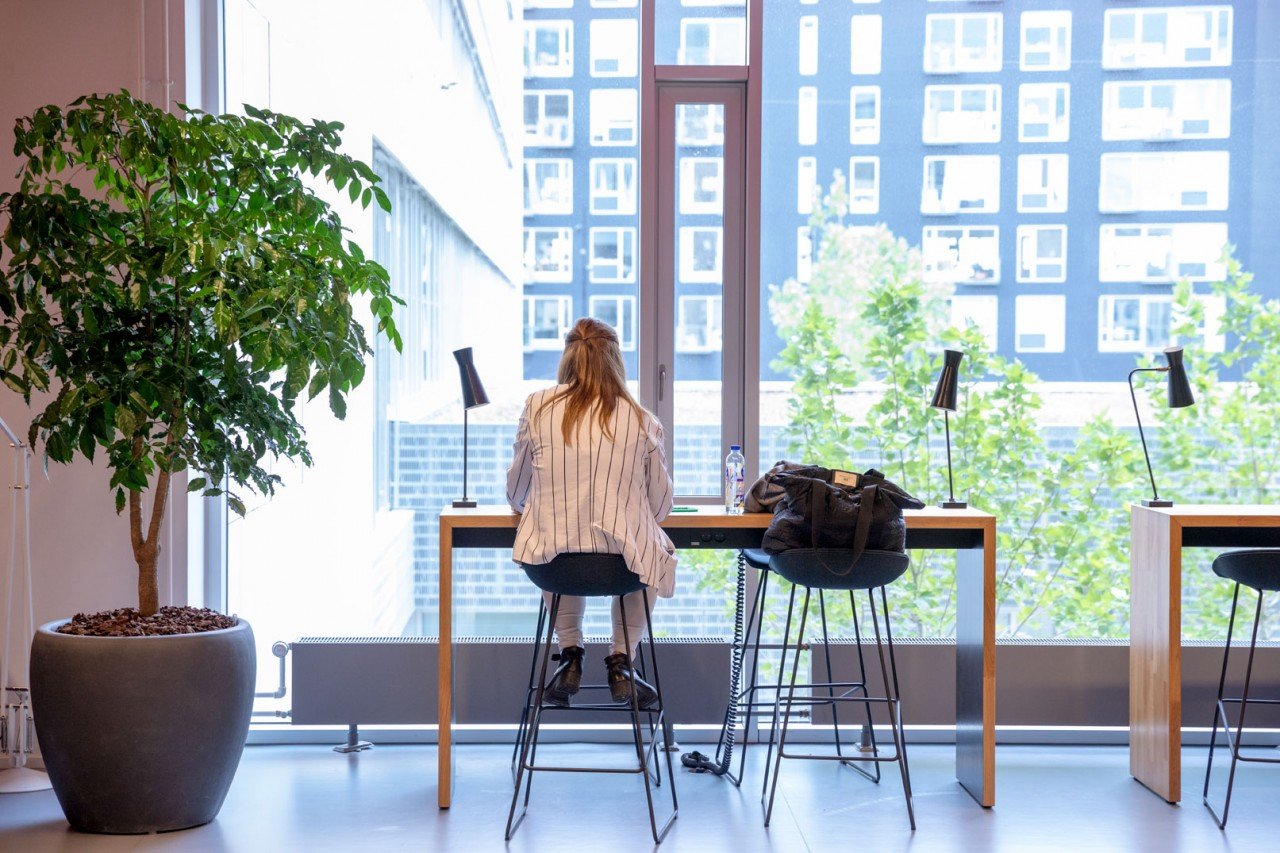 READING SPACE - You have to be really unfortunate to not find a spot to study.
image: Carsten Seidel 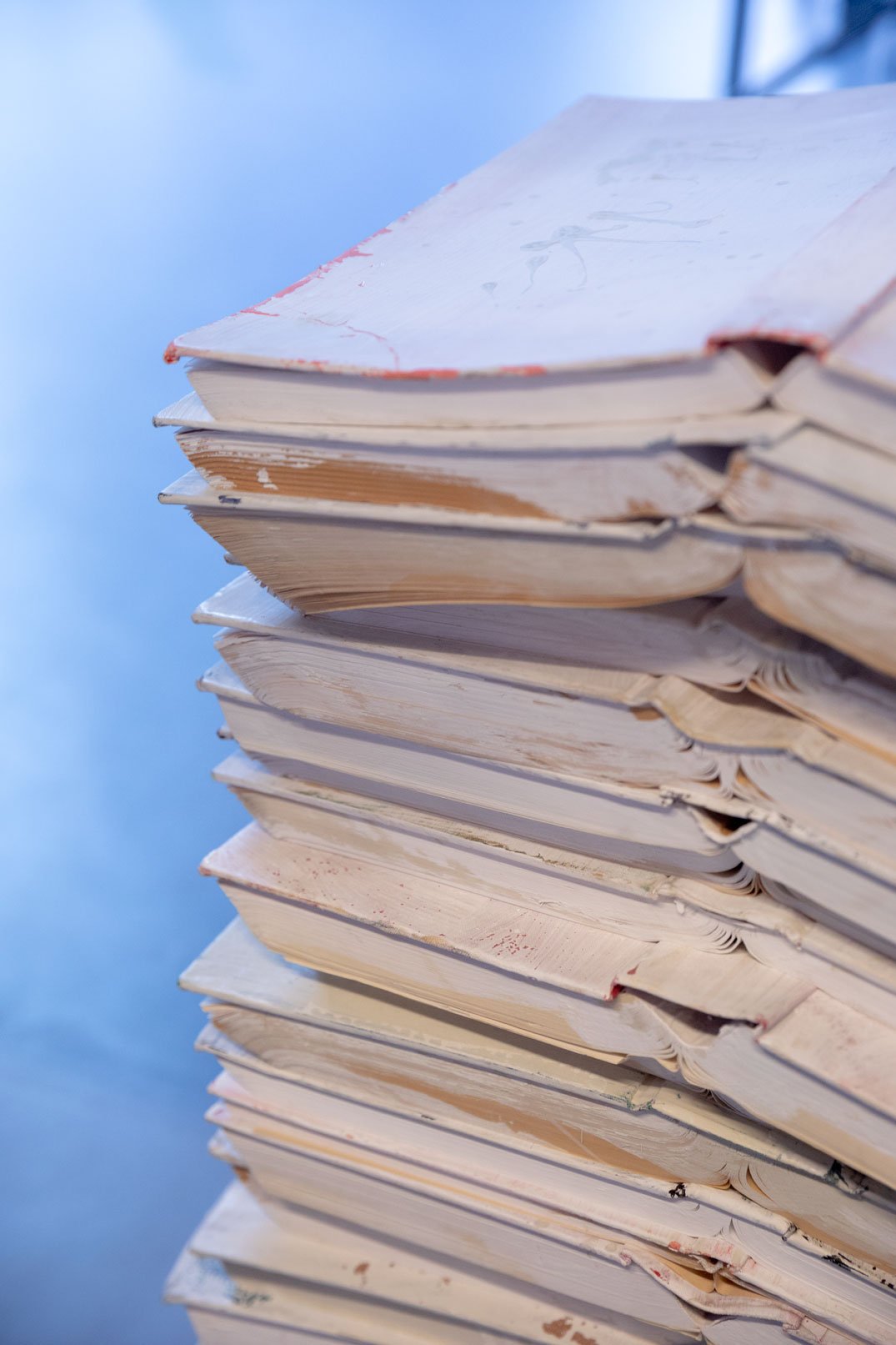 DECORATION - The Faculty of Humanities management got a meeting room decorated with elaborate piles of books.
image: Carsten Seidel 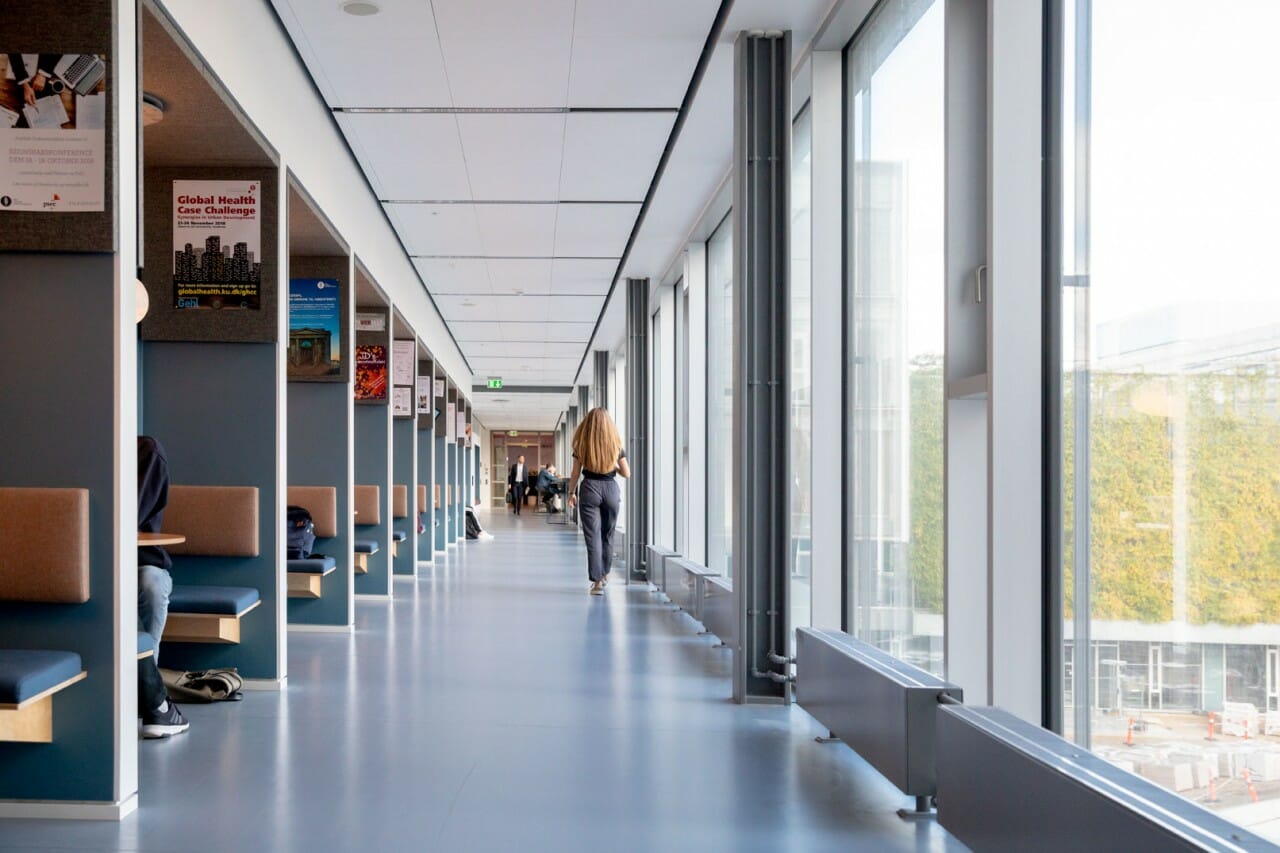 DRY WEATHER - A corridor lets students and staff walk from KUA3 to KUA2 without getting their shoes wet.
image: Carsten Seidel
Newsletter