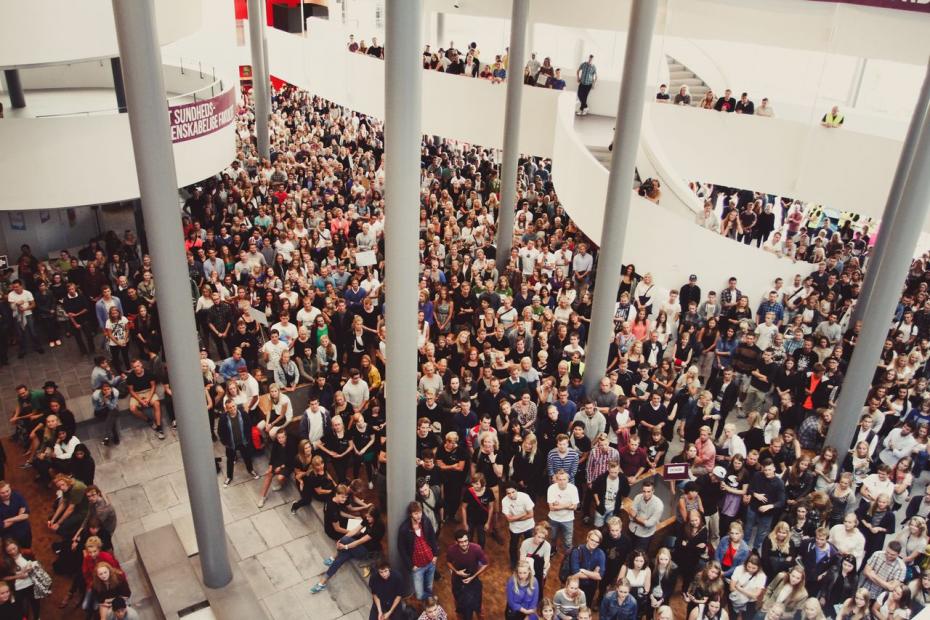 Admissions — All faculties have received more applications than last year, but there are still more available spots left in individual programmes than was the case last year. Psychology remains the degree programme with the highest grade point average.

Last year there were 400 less applicants to University of Copenhagen than was the case the year before. This was in part due to the new minimum requirement of a 6.0 grade point average. This year the university is back at the 2017-level in terms of the number of applicants.

7,326 applicants have been admitted to University of Copenhagen which is an increase of about 450 applicants compared to last year.

This means the increased number of applications the university received is reflected in the number of admitted students, where all six faculties will be welcoming more students than they did last year. Even the Faculty of the Humanities – the only faculty to receive fewer applications than last year – is admitting more students than was the case in 2018.

READ MORE: Acceptance, rejection, standby: What to when you receive an answer on your application

In addition to the increase in applications, the new development is also due to the fact that the university is admitting more applicants this year – close to a hundred additional students on Medicine alone – as well as the opening of two new degree programmes in Computer Science and Economy and Machine Learning as well as Data Science.

7,329 applicatans have been admitted to University of Copenhagen

6,129 have been admitted to their priority 1. That’s 84 percent of all admitted applicants.

Psychlogy has the highest grade point average of 11.8/A

This according to Pernille Kindtler, Head of Guidance & Admissions at University of Copenhagen.

»It’s nice to see that the number of admitted applicants has increased across the board and that there’s a lot of interest in our programmes. I’m especially happy to see that the two new programmes Computer Science and Economy and Machine Learning and Data Science have filled up nicely,« she says.

The Faculty of Science has admitted nine percent more students than they did last year. But that doesn’t mean every programme will be full of new faces.

The number of programmes at the faculty that still have open quota 1 spots has grown from 10 last year to 13 this year. In 2017, there were only four spots open.

This is the result of a broader trend because in spite of an increase in the number of admitted students this year, more programmes report that they still have open spots for students than was the case last year.

The only thing that could worry me was if certain programmes had a very wide gap in the gender distribution. We know that this may deter some from applying.

Pernille Kindtler, Head of Guidance & Admissions at University of Copenhagen

»I wouldn’t say that I’m worried about it, but we would of course like to fill out every spot in the programmes. We will be offering up the available spots, and I’m sure there are many of the programmes that will receive a lot of applicants,« she says.

In recent years there has been a lot of political attention paid to the degree programmes in science. Does it bother you in particular that there are more open spots left at the Faculty of Science?

»Obviously we would have liked to see more applicants in the fields of science because there’s a lot of focus on that both in and outside of the university. But the two new degree programmes may have attracted applicants from some of the other programmes in the faculty,« she says.

That’s a slight increase compared to last year, but we probably won’t see it go any higher. Next year the so-called quick start bonus is abolished, which means that applicants in 2020 won’t be able to multiply their grade point averages by 1.08 as applicants this year have.

Pernille Kindtler for one looks forward to getting rid of what she calls the »artificially inflated« grade point average.

I don’t know that I’m worried about it, but yes, there are more open spots than was the case last year.

Pernille Kindtler, Head of Guidance & Admissions at University of Copenhagen

»University of Copenhagen was from the beginning of the opinion that the quick start bonus was a bad idea because we never saw how it would benefit anyone. We do not believe that the applicant is better suited if he or she applies within two years of having finished high school. So we’re very happy that it has been abolished starting next year, and we expect the grade point averages will drop,« she says.

The number of female applicants continues to rise. This year more than 60 percent of the incoming students are women as was also the case last year.

Pernille Kindtler says that she is in no way concerned about this development before adding:

»The only thing that could worry me was if certain programmes had a very wide gap in the gender distribution. We know that this may deter some from applying – regardless of whether there are more women or men. And it’s too bad if a person decides to not pursue a degree because of the gender distribution,« she says.

Of the 7,326 admitted applicants at University of Copenhagen, 6,129 have been admitted on priority 1 applications. The average age of the applicants is 22.6.

Starting next year, the university will no longer require a minimum grade point average of 6.0 on quota 2 applications. In stead applicants will be subject to a new cognitive admissions test as well as an interview.