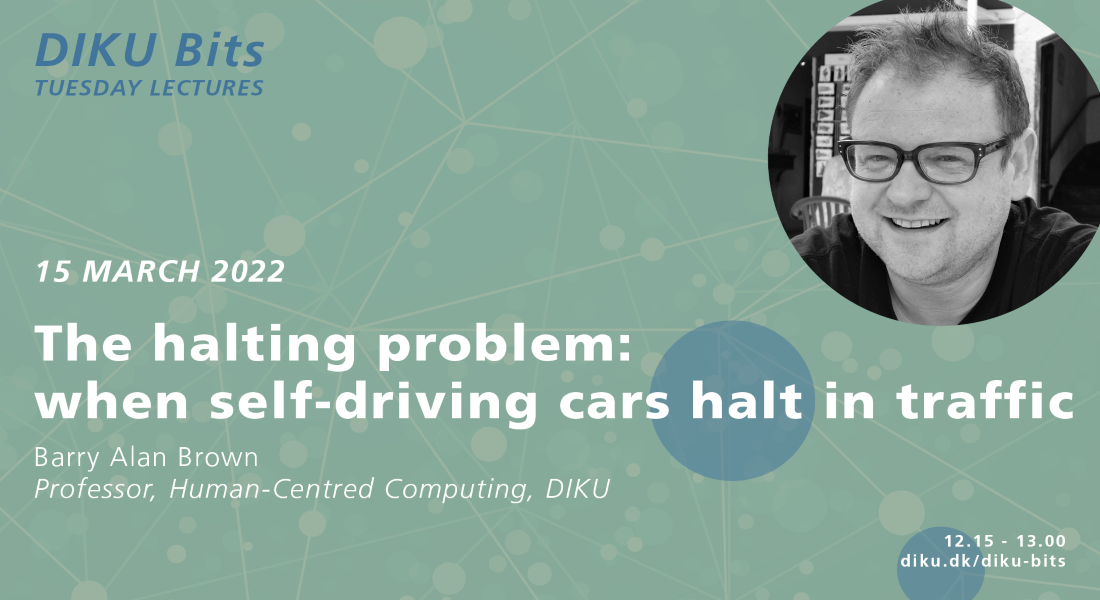 Foredrag — On 15 March the he Human-Centred Computing (HCC) Section at Department of Computer Science, University of Copenhagen, will give a DIKU Bits lecture.

On 15 March the he Human-Centred Computing (HCC) Section at Department of Computer Science, University of Copenhagen, will give a DIKU Bits lecture.

Barry Alan Brown, Professor in the HCC Section at Department of Computer Science, University of Copenhagen.

The halting problem: when self-driving cars halt in traffic.

Despite early successes, building self-driving vehicles is clearly a massive long-term challenge.   Indeed, all current commercial systems suffer from multiple failings which prevent their extensive use in ordinary traffic. In this talk I will introduce our new project we are looking at videos of self-driving cars that are being tested on public roads, in particular the Tesla ‘FSD beta’, and the Waymo driverless taxi service. While the cars featured in these videos can (mostly) navigate the physical environment of the road, it is clear that they still face multiple challenges in  communicating with other drivers. The road is a surprisingly social space, and this creates major challenges for self-driving cars to both communicate their actions to others, but also to see how others communicate to them.

Which courses do you teach? I’ve just started at KU, so it hasn’t been decided what I’ll teach yet!

Which technology/research/projects/startup are you excited to see the evolution of? Obviously the many self driving car startups, but also many of the new robotics companies working on social robotics

What is your favorite sketch from the DIKUrevy? Unfortunately, I have not been to one yet.