Kasper Høj Blinkenberg, IGN, defends his thesis about chalk in the Danish Basin 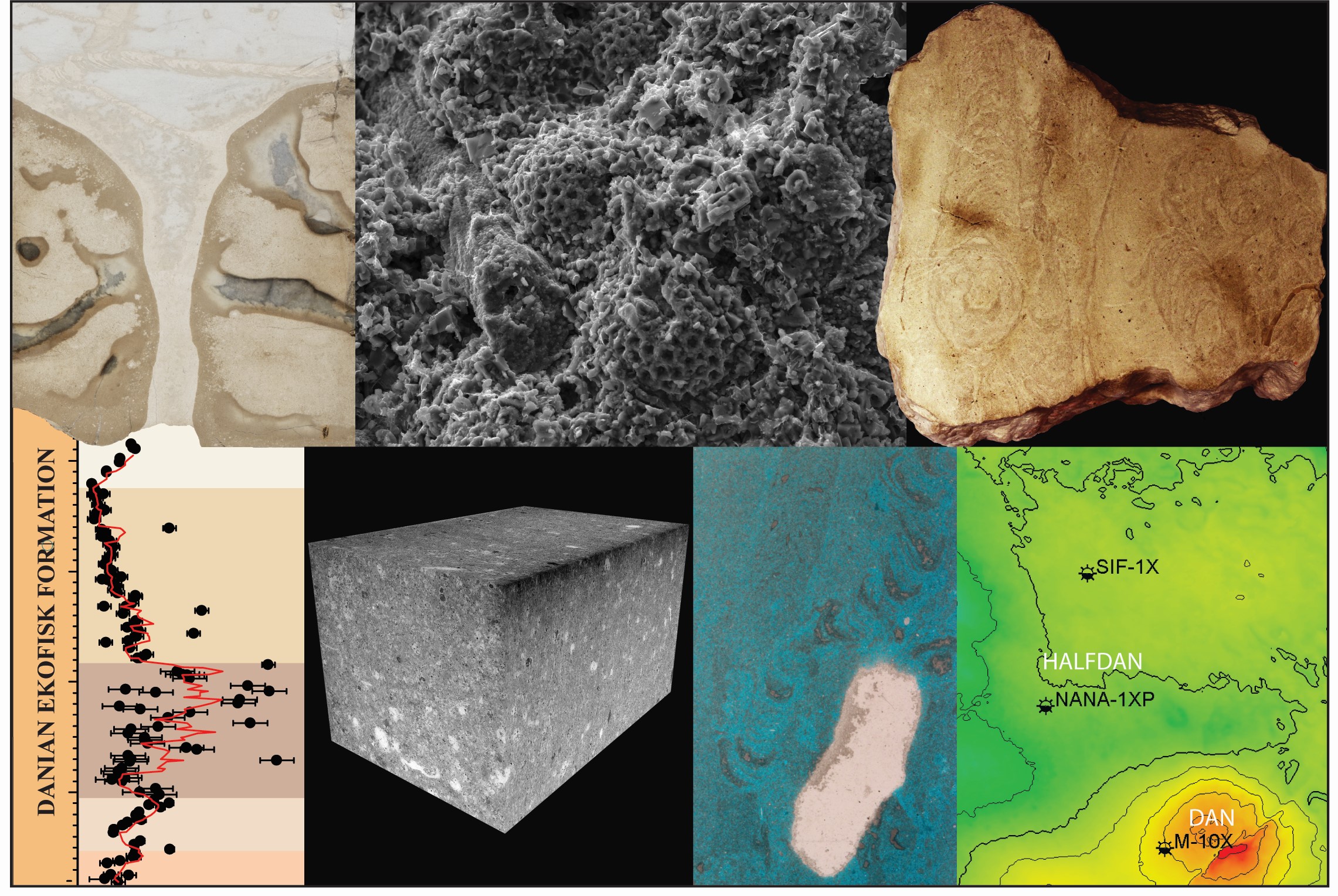 Summary:
Danian deposits are exposed throughout the Danish Basin and extensively cored in the Central Graben where the Danian Ekofisk Formation host economically important hydrocarbon reservoirs. Danian deposits differ from the relative homogenous Upper Cretaceous chalks by their facies complexity and increased silica and clay content. In the Danish Basin, the proximal Danian deposits have been extensively studied and record a diverse benthic ecosystem dominated by grain-rich, bryozoan-dominated facies with localised coral-rich units. Distally the grain-rich deposits grade into fine-grained silica-rich nannofossil chalk that is characterised by a non-cyclic distribution of silica concretions and the presence of finely disseminated nano-silica cement. While these fine-grained and silica-rich deposits are prevalent across large areas of the North Sea Basin, limited work exists on these deposits despite their regional extent and economic importance.
This dissertation investigates the Danian deeper-shelf, fine-grained, silica-rich deposits, and improves the understanding of the Danian deeper-shelf environments in the NW European Chalk Sea with particular focus on the role of silica. The dissertation comprises detailed characterisation of deeper-shelf deposits in the Danish Basin and Danish Central Graben and utilises a range of techniques to unravel the silica-rich chalk at regional-, outcrop-, core- and pore-scale.
At a regional scale, nano-silica concentrations in the Danish Central Graben displays significant stratigraphic and lateral variability, based on corrected and calibrated handheld X-ray fluorescence analysis, from four wells spanning the Maastrichtian Tor and Danian Ekofisk formations. A common stratigraphic signature is, however, observed in all wells, with peak silica concentrations occurring in the lower part of the Ekofisk Formation which corresponds to a synchronous onset of a semi-regional silica event during the mid-Danian nannofossil zones NNT-p2F–G to NNTp4A–D and appears to correlate negatively with reservoir properties.
However, comparison between silica content and reservoir data show no clear correlation, indicating that silica is not the only reservoir controlling factor. At pore-scale, the poor correlation between silica content and reservoir properties (porosity, permeability, pore radius and specific surface area) is further explored qualitatively, and the role of silica diagenesis in the Ekofisk chalk is investigated. Two distinct Ekofisk fabrics are identified based on data integration utilising micro-computed tomography (µCT) and scanning electron microscopy (SEM). Samples with more than 5% silica content show pronounced calcite recrystallization and cementation and widespread silica cementation whereas chalk in the Ekofisk Formation, with less than 5% silica content, display fabrics that are comparable to the Tor Formation. The diagenetic fabrics observed in the silica-enriched part of the Ekofisk Formation appears to be not only the result of silica cementation, but also by calcite recrystallization and cementation, interpreted to be induced by mechanisms related to progressive burial silica diagenesis which ultimately reduce the porosity and permeability of the silica-enriched parts of the Ekofisk system.
In the Danish Basin, the Dalbyover Quarry exposes one of few Danian deeper-shelf silica-rich deposits. The outcrop exposes fine-grained nannofossil chalk facies, similar to that seen in time-concurrent intervals in the Central Graben. Most conspicuous in the quarry, are randomly organised silica concretions forming volumetrically thick concretion-rich units, which is contrasting to the commonly observed bands or beds of laterally extensive silica concretions that replace Thalassinoides isp. galleries. The link between silica concretion and bioturbation is thus less evident in the Dalbyover system.
Based on integration of detailed sedimentology, ichnofabric analysis and palaeoecology, the depositional environment, ichnology, sea-floor and sediment conditions are delineated.
The Dalbyover system records an impoverished deeper-shelf unit characterised by a low-diversity and density benthic fauna and a trace fossil assemblage that differs significantly from onshore Maastrichtian chalk and proximal Danian deposits, where common trace fossils such as the ichnogenera Thalassinoides, Planolites and Zoophycos and rare or absent. Instead, the system is dominated by meniscate traces attributed to the ichnogenera Bichordites and Taenidium outlining two new ichnofabrics of the Cenomanian–Danian Chalk Group.
The ichnofabrics of the Dalbyover system are interpreted to have controlled the random distribution of silica concretions, resulting in the thick concretion-rich units observed in the quarry.
The studies presented in this dissertation highlight the application of a range of techniques and workflows to characterise the fine-grained silica-rich chalk. Based on multidisciplinary approaches, the palaeoenvironments and silica distribution of Danian chalk is delineated and the studies add to the understanding of the complexity of the Danian system in the NW European Chalk Sea