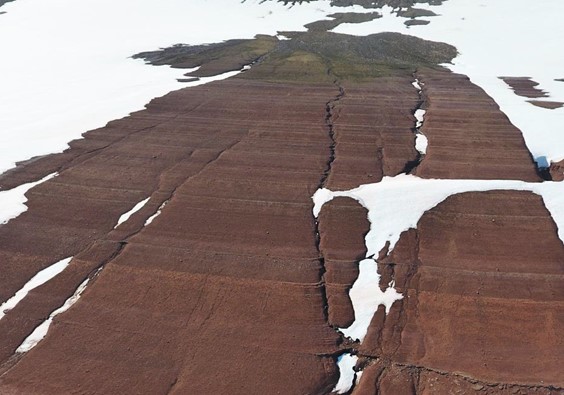 Summary:
The Late Triassic is characterized by major geologic and evolutionary events in Earth’s history. During this time, the super continent Pangaea began to break up while numerous animal groups, including dinosaurs, first appeared. The chronology of these unique geologic and biotic events are critical to understand this period in Earth’s history.
One of the key sections for understanding the paleoclimatic and biological evolution of the Late Triassic is the lake sediments of the Fleming Fjord Group in central East Greenland. Paleontological excavations show that these sediments contain numerous vertebrate fossils such as dinosaurs and mammal ancestors. A detailed and reliable determination of the relative age of the sediments in the Fleming Fjord Group is essential to place the important vertebrate fossils into global models on biological evolution in the Late Triassic. Moreover, the lake environment was very sensible to climate changes resulting in a million-year-long climate record hidden in the lake sediments.
This PhD study aims to strengthen the stratigraphic, temporal, paleoclimatic, and paleoenvironmental interpretations of Late Triassic lake sediments with vertebrate fossils in the Fleming Fjord Group. The climate record hidden in the lake sediments is especially controlled by the gravitational interactions between the Earth and other planets in the Solar System. This climate response is used as a geologic clock, which combined with age determination from magnetic properties of rocks and radioactive isotopes precisely dates the vertebrate fossils. Furthermore, the astronomically controlled climate changes imprinted in the lake sediments reveal how the planets behaved in the past, which is important for calculations of ancient planetary motions. The climate is also investigated by looking at fossilized wave ripples on ancient lakebeds. These especially reveal the wind regime in the pre-Atlantic rift basin during Late Triassic times.
Collectively, the results of this PhD study contribute with a refined geologic framework for the Late Triassic Fleming Fjord Group in central East Greenland and especially shed new light on the paleoclimatic conditions that prevailed during 11 million years of lake deposition at the northernmost part of the supercontinent Pangea.