Myriam Boussaha, IGN, defends her thesis about the Stevns-2 core 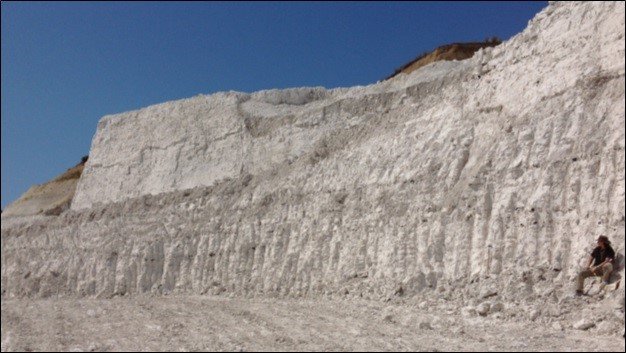 Sedimentology and Stratigraphy of the Stevns-2 core: Implications for Paleoenvironment, Paleoclimate and Diagenesis of the Upper Cretaceous Chalk, Danish Basin

Summary:
The 350 m long Stevns-2 core (drilled in the Stevns peninsula, south of Copenhagen, DK) was the subject of a multidisciplinary study combining sedimentology, isotopic geochemistry and micropaleontology, whose main results and interpretations have been the subject of papers presented in this thesis along with complementary results.
A new Boreal biozonation based on calcareous nannofossils has been erected for the upper Campanian–Maastrichtian interval, based on results from this new drilled core, compiled with results of three additional sites spanning the same time interval in the Danish basin (Stevns-1, Rørdal and Skælskør-1). This new biozonation scheme is presented in the frame of an integrated Boreal time scale that comprises litho-, bio-, high-resolution chemostratigraphy and gamma-ray trends based on Danish Basin deposits and correlated to reference sections worldwide (Gubbio, central Tethys, Italy and ODP Site 762C, Indian Ocean).
The facies analysis was performed at the centimeter scale and allows highlighting the following long-term trends: (1) chalk-marl alternations dominate in the upper Campanian and mainly correspond to a system subjected to variations in clay influx into the basin impacting the carbonate production. (2) The lower-middle Maastrichtian is characterized by the presence of laminated facies in chalk that may have resulted from oxygenation variations in the bottom waters. (3) The upper Maastrichtian is characterized by the presence of flint levels and the development of bryozoan colonies on the seabed, and correspond to changes in the distribution and nutrient inputs in the water column impacting the ratio of pelagic productivity and benthic production. In these three intervals, although the sediment response is contrasted, changes in sea-surface temperature and clay input seem to be the most likely controlling factors to explain the long-term changes in sedimentation of the Boreal epicontinental chalk sea.
Time series analysis was performed in these three intervals, based on the bulk carbonate carbon isotopes and facies successions, demonstrating a contrasting response to Milankovitch climate cycles, with eccentricity clearly driving the variations of carbon isotopes whereas high-frequency facies changes may not always reflect Milankovitch pacing.
The dominance of the primary facies in successive stratigraphic intervals seems to control both the diagenetic structures observed in the core (stylolites, hairlines fractures and presence of diagenetic breccias), in outcropping sections and seismic profiles. The coupling of our observations in the Stevns-2 core with outcrop and seismic data point to diagenetic features of the chalk linked to the development of a large polygonal fault system.